According to the National Institute for Aging, quackery is at an all-time high.1 American consumers are exposed to an overwhelming sea of advertising for dietary supplements and homeopathic products. Many consumers assume that some government entity, such as the FDA, has ruled these products safe and effective before allowing the ads to be broadcast and printed. Many people do not realize, however, that the products are not proven safe for use. This widespread misconception has resulted in the spending of hundreds of millions of dollars for products whose efficacy has not been validated by clinical trials. In effect, many consumers are placing their trust in products promoted by manufacturers who do not invest the funds to carry out research to prove the safety and efficacy of these products.

Patent Medicines and Dietary Supplements
Products promising to enhance sexual performance have been promoted for over a century, dating back to the patent medicines of the 1800s; these products were characterized by wildly exaggerated claims and sold to the public by unscrupulous manufacturers, without evidence of safety or effectiveness. The 1906 Pure Food and Drug Law was an attempt to eliminate this pernicious practice, and for many years Americans were somewhat better protected from unproven products. 2 However, the passage of the 1994 Dietary Supplement Health and Education Act, championed by Utah's Orrin Hatch, allowed manufacturers to market products without FDA approval of safety and efficacy.2

Andropause
During andropause, the male's serum testosterone levels fall, leading in many cases to erectile dysfunction.3 Males cannot achieve an erection or cannot sustain one for a sufficient time to complete sexual intercourse. The penis may gradually disengorge during intercourse. Legitimate medical interventions include testosterone, Viagra, Caverject, and devices inserted into the penis. Patients undergoing andropause often do not choose these therapies, opting instead to try dietary supplements. As millions of baby boomers are currently experiencing andropause, marketers offer hundreds of products allegedly beneficial in reversing impotence and enhancing male sexual performance.4

The FTC and Impotence Claims
The Federal Trade Commission (FTC) is a government agency charged with preventing fraudulent, deceptive, and unfair business practices and with helping educate consumers to avoid them.5 The FTC issued a consumer alert entitled The Truth About Impotence Claims. The agency clarified several issues and disspelled a great deal of manufacturer hype:

• Products advertised as effective for treating impotence without a physician's prescription should be ignored, as they cannot cure the condition.
• Products advertised as "breakthroughs" in the treatment of impotence mandate double checking with a physician for legitimacy.
• Some manufacturers create phony "clinics" and fake "institutes" solely to promote bogus impotence cures. Consumers should check with a physician to verify the legitimacy of these organizations.
• Some manufacturers of impotence cures claim that their product is "scientifically proven" to work. When a consumer sees the phrase "clinical studies prove it works," caution is in order, as these claims are often false. Furthermore, claims providing very high rates of success are often bogus.
• When impotence cures are said to be "herbal" or "all natural," the product should be ignored. There is no herb or "all natural" substance proven to cure impotence.

The agency also urges consumers to consult a qualified practitioner for treatment of impotence, rather than placing one's trust in their bogus remedies. 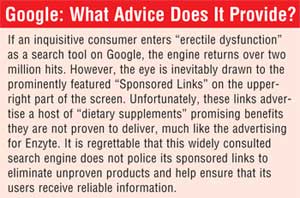 The FDA's 2006 Announcement
In the fight against fake impotence and sexual enhancement products, the FDA revealed in 2006 that it had completed a groundbreaking survey in which it analyzed 17 "dietary supplements" promoted on the Internet for erectile dysfunction or enhancement of sexual performance.6 The FDA explained that some of these products (Zimaxx, Libidus, Neophase, Nasutra, Vigor-25, Acta-Rx, and 4EVERON) were promoted and sold as dietary supplements but were actually illegal drugs containing potentially harmful, undeclared ingredients, such as sildenafil or analogues of sildenafil or vardenafil. The agency concluded that the claims made for these products were claims made for the undeclared nondietary supplement components, making them illegal drugs. The FDA sent warning letters to the marketers explaining the illegal nature of their activities, halted shipment of some of them into the United States, and threatened to take additional actions.

The FDA's Final Rule
In June 2007, the FDA announced a final rule establishing regulations for the current good manufacturing practices (CGMP) of dietary supplements, partly due to the 2006 study of sexual enhancement/impotence products.7-11 Henceforth, the FDA's new CGMPs will ensure that supplements are produced in a quality manner, do not contain contaminants or impurities, and are accurately labeled. The rule is effective as of August 24, 2007, for large businesses and somewhat later for small businesses. Watchdog groups immediately pointed out that supplement manufacturers have never been required to prove their products are safe and effective, and the new regulations also fail to require this fundamental evidence of quality.12 An expert quoted by ABC News stated, "Knowing you have pure and well-made useless crap is a little better than having impure useless crap, but not by much."13

What About Bob? The Enzyte Scandal
While many marketers are in steep competition to capture a share of this lucrative business, one has managed to rise above the others, with its ubiquitous "Smiling Bob" Enzyte ads. This marketer has capitalized on the current thinking that an unproven dietary supplement can easily cure or treat a serious medical condition such as impotence. Early ads promised that Enzyte would add as much as three inches to the length of the user's penis.14 Web site testimonials also claim such benefits as allowing stronger, firmer, and easier-to-achieve erections, assisting in maintaining a fully hard erection, providing full and satisfying erections, and reversing the normal erectile problems of aging.15-19 Enzyte contains many ingredients, none of which is FDA-proven to be safe or effective in accomplishing its advertised purposes. These ingredients include niacin, zinc, copper, Korean red ginseng root, ginkgo, pine bark, Tribulus terrestris, arginine, Avena sativa, horny goat weed, maca root, muira puama, saw palmetto, and Swedish flower pollen.20,21

The Cincinnati-based marketer of Enzyte, Berkeley Nutraceuticals, was reported in 2004 by a Cincinnati newspaper to be the subject of over 3,700 consumer complaints.22 In early 2006, Berkeley and its subsidiaries reached a settlement with the attorneys general of 18 states and Washington, D.C. in which it would pay $2.5 million and provide restitution to customers for unsubstantiated claims about the efficacy of their products.23-25 The $2.5 million settlement was a burden easily borne by the company, as it may have reaped as much as a quarter of a billion dollars in 2004 alone through sales of Enzyte and 14 other unproven supplements.26 Later in 2006, the U.S. Department of Justice indicted the company and six individuals (including the president and owner) for bilking Americans of at least $100 million.27 Fraudulent business practices included sending consumers supplements they did not order, charging their credit cards without authorization, laundering the money, and mislabeling a product known as Rovicid. Despite the indictments and settlements, the company continues to advertise and sell its products to a public seemingly unaware of the controversy.

Quality of Research on Dietary Supplements
When research on dietary supplements intended for sexual enhancement appears, it must be scrutinized closely to assess the soundness of the methodology employed. Two such studies explored the abilities of KyoGreen powder (barley, wheat grass, seaweed) for sexual dysfunction in men and women and ArginMax (herbs, vitamins, minerals) to enhance sexual function in males.28,29 While both studies seemed to show positive results, they are rendered virtually useless because neither study used a control group that was administered a placebo for a valid comparison. Unfortunately, much of the research on dietary supplements is hampered by profound flaws such as this that would cause the research to be rejected by the FDA if it were to be submitted through the legitimate new drug application process used for new medications.

What Should the Pharmacist Do?
Lack of evidence about the safety and efficacy of dietary supplements exposes the consumer to unknown health hazards, as these products use ingredients that are of unknown therapeutic benefit. Marketers of these supplements have been known to engage in fraudulent and deceptive practices. Marketing hype and high profits should never override the pharmacist's professional responsibility to demand proof of safety and efficacy in the products we recommend. Patients experiencing andropause deserve a pharmacist who will refer them for legitimate medical care rather than selling them products that lack proof of efficacy and safety. 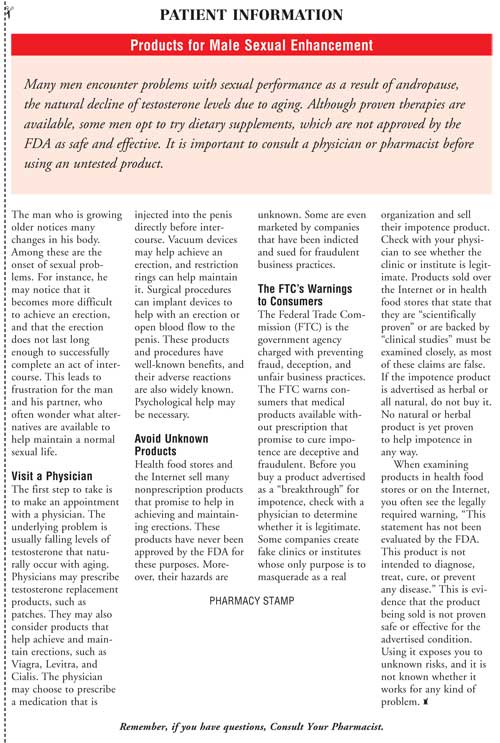