Heart failure (HF) afflicts 5.3 million people in the United States, with 550,000 new cases each year. 1,2 The current treatment of HF consists of ACE inhibitors, angiotensin receptor blockers, beta-blockers, aldosterone antagonists, digoxin, and diuretics. Because of decreased cardiac output, patients with HF have increased activity of the sympathetic nervous system and renin-angiotensin aldosterone system (RAAS), along with an increase in nonosmotic vasopressin release. Combined, this leads to diminished renal sodium and water excretion, as well as edema and symptoms of volume overload.3 Diuretics have been used in the treatment of patients with HF since 1919, with the discovery of the diuretic trait of mercury.4 Currently, loop diuretics, thiazide diuretics, and aldosterone antagonists are commonly used in patients with HF to remove excess volume and relieve symptoms.

Epidemiology
Heart failure contributes to approximately 300,000 deaths each year.1,2 In addition, HF is the most common diagnosis in hospitalized patients aged 65 years and older.2 It is more prevalent in African Americans and in people who are overweight or obese.2 Men have a higher rate of HF than women, and 80% of men and 70% of women under the age of 65 who have HF will die within eight years.1,2 The total cost (direct and indirect) of HF in the U.S. for 2008 is estimated at $34.8 billion.1

Etiology and Clinical Presentation
Intrinsic disease states such as dilated or hypertrophic cardiomyopathy, in addition to various external factors including uncontrolled hypertension, increased stroke volume, and hormonal disorders, place high demands upon the heart, leading to HF. Within the past three decades, considerable attention has focused on left ventricular (LV) dysfunction, loading conditions, neuroendocrine activation, and ventricular remodeling as the principal pathophysiologic mechanisms underlying HF progression.5 There has been a fundamental shift, however, in the origin of HF that is often underemphasized.5-7 The Framingham Heart Study suggests that the most common cause of HF is no longer hypertension or valvular heart disease, as it was in previous decades, but rather coronary artery disease.5 Coronary artery disease leads to reduction in coronary blood flow and oxygen delivery to the myocardium, resulting in hypoxia and impaired cardiac function. Conditions such as arrhythmias, congenital defects, and cardiomyopathies of known origins (i.e., bacterial or viral) also precipitate HF.

The cardinal manifestations of HF vary depending on whether right ventricular (RV) or LV failure is present. Although both types may occur together, the symptoms of one side often predominate. Systemic edema including ascites, increased jugular venous pressures, hepatosplenomegaly, peripheral edema, and anasarca are mainly associated with RV failure (cor pulmonale). Dyspnea, orthopnea, paroxysmal nocturnal dyspnea, and nocturia, all of which are related to pulmonary congestion symptoms, are associated with LV failure.8

The approach first developed by the New York Heart Association (NYHA) to quantify clinical assessment of HF remains widely utilized and is described in TABLE 1.9 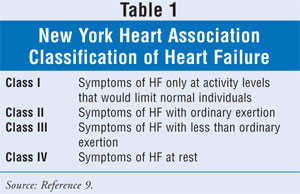 Reducing pulmonary and/or systemic congestion along with edema and other clinical symptoms such as dyspnea and shortness of breath is the primary goal of diuretic therapy. Diuretic agents promote an increase in urine output by altering how the kidney handles sodium and water, since sodium excretion is followed by water excretion. Nonetheless, inhibition of sodium reabsorption may take place at different segments of the renal tubular system. A synergistic effect may be seen when using two different diuretic agents that alter sodium reabsorption at multiple nephron sites, therefore enhancing efficacy. Properties of the pharmacologic diuretic agents mainly utilized in treating HF are described in TABLE 2. 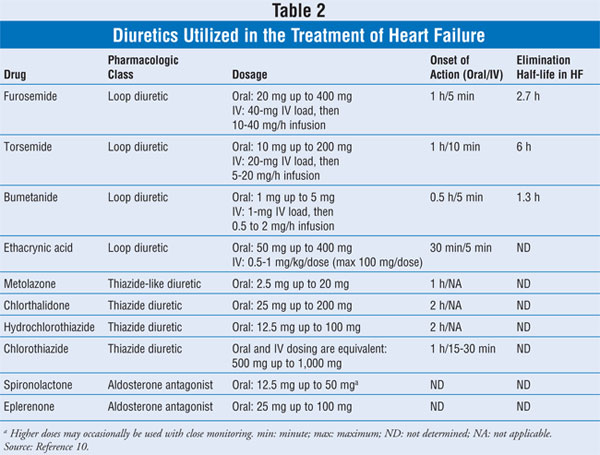 Loop Diuretics: Loop diuretics remain the mainstay therapy for fluid removal in patients with HF. They exert their action by inhibiting the sodium-potassium-chloride cotransport system located within the thick ascending limb of the loop of Henle. Patients with chronic HF tend to have a decreased response to normal doses of loop diuretics secondary to reduced renal blood flow, increased sodium reabsorption at sites downstream (distal tubule and collecting duct) due to the activation of RAAS and the sympathetic nervous system, and possible delayed intestinal absorption.11

The four loop diuretics used in the treatment of HF are furosemide, bumetanide, torsemide, and ethacrynic acid (TABLE 2). Ethacrynic acid is rarely used, but is reserved for patients with true type-1 hypersensitivity reaction to sulfa drugs. There are minimal clinically significant differences between furosemide, bumetanide, and torsemide.11 One issue with furosemide is that its bioavailability is 11% to 90% with erratic oral absorption; thus, patients who do not respond to oral furosemide might benefit from switching to bumetanide or torsemide. 10 Murray et al illustrated with an open-label, randomized trial in 234 patients with chronic HF that patients who are treated with torsemide have less fatigue and lower rate of readmission by 52% for HF at one year compared to those treated with furosemide.12

Intravenous diuretics are more potent than their equivalent oral doses, especially with severe or decompensated HF due to significant interstitial edema of the gastrointestinal tract. It is suggested that continuous infusion of loop diuretics has potential advantages over intermittent bolus diuretic administration in patients with severe HF, such as preventing postdiuretic sodium-chloride retention, in addition to being more efficient and having less potential for toxicity.13,14

Thiazide diuretics are usually added to a loop diuretic regimen to augment the diuresis in patients with refractory edema. This combination appears to be synergistic by possible multiple mechanisms including decreased postdiuretic sodium chloride retention, decreased sodium transport along the proximal tubule through inhibition of carbonic anhydrase, and by inhibition of sodium reabsorption at the distal convoluted tubule.15,16 The effective doses of thiazide diuretics vary among patients, with some patients requiring daily administration and others only requiring them once weekly. Another approach is to use the combination for a short, fixed period of time and then revert  to monotherapy with a loop diuretic when the patient achieves euvolemia.

Aldosterone Antagonists: Although aldosterone antagonists are not technically classified as diuretics, their adjunctive use in HF relates to their additive diuretic effect in combination with other drugs, decreasing the cardiac workload and reducing edema. Patients with HF have increased RAAS activity, and the direct local effect of aldosterone on the heart may include hypertrophy, fibrosis, and proarrhythmia.17,18 There are currently two aldosterone antagonists available in the U.S.--spironolactone and eplerenone (TABLE 2).

The Randomized Aldactone Evaluation Study (RALES) evaluated spironolactone, which competes with aldosterone for the mineralocorticoid receptor sites in the distal renal tubules, increasing sodium chloride and water excretion while conserving potassium and hydrogen ions. The clinical trial showed that the addition of spironolactone to patients with systolic dysfunction and NYHA class III resulted in a 30% reduction in mortality and a 35% reduction in hospitalization for HF; nevertheless, patients treated with spironolactone had a significant reduction in systolic and diastolic blood pressure and a lower incidence of hypokalemia, but a dose-related increased risk of hyperkalemia. 19 However, due to nonselective binding of spironolactone to the androgen and progesterone receptors, endocrine adverse effects such as gynecomastia, breast pain, menstrual irregularities, impotence, and decreased libido were experienced.

Eplerenone, a more selective agent to the mineralocorticoid receptor, has fewer endocrine adverse effects than spironolactone. Eplerenone was evaluated in the Eplerenone Post-Acute Myocardial Infarction Heart Failure Efficacy and Survival Study (EPHESUS), which enrolled patients who had myocardial infarction and reduced LV systolic function (LV ejection fraction [LVEF] ?40%). Patients who were treated with eplerenone had significant reduction in all causes of mortality, which was entirely due to the reduction in cardiovascular mortality.20

The use of an aldosterone antagonist requires very careful monitoring for renal function and potassium, as the incidence of fetal hyperkalemia has increased since the RALES publication.21 Special consideration should be taken in patients with other comorbidities such as significant renal dysfunction, advanced age, and diabetes.

Investigational Agents
Vasopressin Antagonists: The decreased activation of mechanoreceptors at the LV, carotid sinus, aortic arch, and renal afferent arterioles by the decreased cardiac output in patients with HF will lead to enhanced release of arginine vasopressin and stimulation of thirst.3 The three vasopressin receptors are V1a, V1b, and V2. V2 receptors are located at the basolateral membrane of the distal nephron and renal collecting duct.22 Selectively blocking the V2 receptors in patients with HF improves urine output and increases serum sodium concentration,23 while V1a and V1b receptors principally cause vasoconstriction and mediate adrenocorticotropin release, respectively.24

A recent multicenter, randomized, double-blind study evaluated oral tolvaptan, a selective V2 receptor antagonist, in patients with HF and systolic dysfunction. In this study there was no difference between tolvaptan and placebo on the LV volume, but there was a reduction in the combined end point of mortality and HF in the patients who were treated with tolvaptan.25

Conivaptan, an agent that blocks both V1a and V2, is currently FDA approved for the treatment of hyponatremia. It was evaluated in a small study in patients with advanced HF. A single IV dose of conivaptan resulted in significant reduction in the preload and an increase in urine output compared to placebo. 26

Large trials are needed to evaluate vasopressin antagonists in HF, which have a potential benefit in inducing aquaresis without an increase in the activation of RAAS.27

Adenosine Antagonists: Adenosine reduces renal blood flow and decreases the glomerular filtration rate (GFR) in patients with HF.28 Four adenosine receptors (ARs) have been identified: A1, A2A, A2B , and A3.29 According to Elkayam et al, direct infusion of adenosine into the renal arteries of patients with chronic HF leads to reduction of renal blood flow.30 This mechanism suggests that blocking the ARs in the kidneys may enhance the renal blood flow in patients with chronic HF. Gottlieb et al showed in small group of patients with HF that administering an A1 antagonist resulted in increased sodium excretion without a decrease in GFR compared to furosemide.31 Givertz et al evaluated the effects of the A1 antagonist KW-3902 in patients with acute decompensated HF and renal impairment or diuretic resistance.32 The infusion of KW-3902 resulted in increased urine output and decreased serum creatinine compared to placebo.

These few studies showed promising results, but safety needs to be established in humans because ARs are found in all organs and play a key role in regulating metabolism. Larger studies are under way (PROTECT-1 and PROTECT-2) to evaluate the potential use of this new class of medication in patients with HF.

Conclusion
Treatment of HF has changed dramatically during the past 20 years, but diuretic agents remain an essential component in removal of excess fluids. While loop diuretics are regarded as first-line therapy, the addition of thiazide diuretics may be required in patients with advanced HF. Patients with systolic LV dysfunction with NYHA class III and IV will also benefit from addition of aldosterone antagonists; however, a close monitoring of renal function and serum potassium level is required. Novel agents such as vasopressin antagonists and adenosine antagonists are currently being evaluated, with promising results. When treating HF with diuretics, care must be taken to not unload too much volume, which may result in cardiac output depression.