Some illnesses are found to take varied courses in geriatric patients.1 In the elderly, more complications in gastrointestinal diseases are to be expected and the presence of comorbidities often make diagnosis and management more difficult.1 For example, initial symptoms and signs of diverticulitis may be less pronounced in senior patients who have a diminished sensorium, allowing pathology to advance to a dangerous point prior to symptom development.2,3 They are also less likely to respond to therapy, have more frequent free perforation, and greater postoperative morbidity and mortality.2

In the colon, the presence of multiple diverticula (FIGURE 1), protruding pouch-like mucosal sacs occurring normally or as a result of herniation, is known as diverticulosis .4 Diverticula are thought to form when pressure inside the colon builds, usually because of constipation.5 While the exact mechanism involved is still unclear, this condition is thought to be a result of a lifelong, low-fiber diet. While colonic diverticulosis is usually asymptomatic, symptoms may include bloating, mild cramps, and constipation. 5 Dietary interventions (TABLE 1) are geared toward the prevention of complications such as bleeding and inflammation. Contrary to common belief, there are no scientific data supporting recommendations to avoid seeds (e.g., sesame, sunflower, pumpkin, poppy, tomato) or other dietary substances (e.g., popcorn) that may impact a diverticulum.4,5 In the United States, approximately 10% of people over the age of 40 have diverticulosis; frequency increases as age advances, and by age 60 and older, this disease appears in about 50% of individuals.5 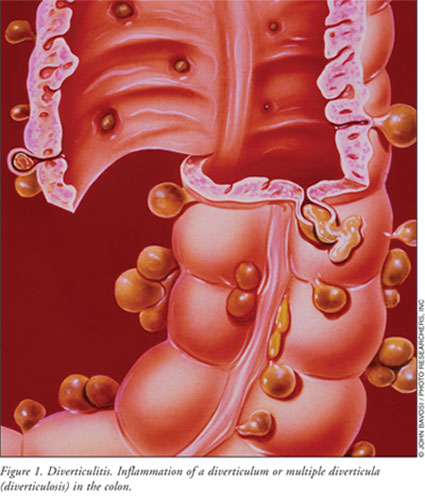 When a micro- or macroperforation develops in a diverticulum and releases intestinal bacteria (e.g., aerobic and anaerobic gram-negative bacilli), it is referred to as diverticulitis.2,4 Inflammation resulting from this perforation remains localized in most patients (75%), while others (25%) develop complications (TABLE 1).4 Diverticulitis develops in 10% to 25% of patients with diverticulosis; its incidence increases the longer the existence of diverticulosis.5,6 Diagnosis is preferably made by abdominal CT scan with oral and IV contrast. The differential diagnosis includes appendicitis and cancer of the colon and ovaries. Diverticular disease (i.e., diverticulosis and diverticulitis) is commonly found in industrialized or developed nations where low-fiber diets are prevalent (e.g., Australia, England, and the U.S.) and rarely in Asia and Africa, where high-fiber vegetable diets predominate.5 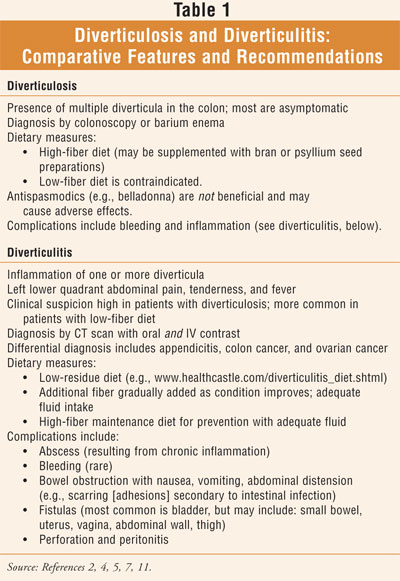 Clinical Features
The most common signs and symptoms in a patient with diverticulitis are abdominal pain and tenderness in the left lower quadrant of the abdomen and fever.4,5,7 These may be accompanied by cramps, constipation, and chills.5 Nausea, vomiting, and abdominal distension may indicate bowel obstruction, which may occur with repeated episodes of diverticulitis.2,4,5 Bleeding is uncommon and usually indicates complications of the disorder. 5 The most serious cases of diverticulitis are usually seen in geriatric patients, particularly in those taking medications that increase the likelihood of infection (e.g., prednisone).4 Almost all serious cases are discovered in the sigmoid region of the colon.4

Treatment
Mild Diverticulitis: For mild diverticulitis, in patients that can tolerate oral hydration, treatment involves rest, a liquid diet, and oral antibiotics.4,8 A course of broad-spectrum antimicrobial therapy should include coverage targeting anaerobic microorganisms (i.e., ciprofloxacin plus metronidazole or amoxicillin/clavulanate plus metronidazole). In the elderly, the lower end of metronidazole adult dosing guidelines is recommended; ciprofloxacin and amoxicillin/clavulanate adult dosing should be adjusted carefully based on renal function.9 Generally, symptoms subside and disappear rapidly with treatment. After a few days, the patient can start a soft, low-fiber diet and use a psyllium seed preparation (e.g., Metamucil and Citrucel) daily to keep the stool soft; after one month, patients can begin a high-fiber diet. 8

Severe Diverticulitis : People with more severe symptoms, including abdominal pain, fever >101F (38.3C), marked leukocytosis, inadequate response to oral antibiotics, and other evidence of serious infection or complications should be hospitalized. 4,8 Treatment involves IV fluids and IV antibiotics (e.g., ceftazidime sodium plus metronidazole dosed according to renal function), bed rest, and eating nothing by mouth until symptoms subside.8 Meperidine for severe pain, titrated to analgesic effect, is preferred to morphine sulfate, which can cause colonic spasm.2 Approximately 80% of patients can be successfully treated without surgery.4

Surgery
About 20% of people with diverticulitis require surgery because their condition does not improve. 8 In recurrent and complicated diverticulitis, the treatment of choice is surgical resection of the inflamed bowel.10 If an abscess is discovered, CT-guided percutaneous draining may be attempted before surgery is considered.8 Emergency surgery may be required for the presence of a large abscess, perforation, peritonitis, or ongoing bleeding; this usually requires a colostomy procedure as well, to allow normal nutritional intake and bowel movements.5 It has been found that among patients with diverticulitis who are younger than 50 and who require surgery, men outnumber women three to one; among those over 70 years, women outnumber men three to one.8

Dietary Measures
During flare-up periods of diverticulitis, a low-residue diet (<10 g fiber/day) is recommended to decrease bowel volume and allow the infection to heal.11 Vitamin and mineral supplementation may be necessary if a low-residue diet is required for an extended period of time.11 The "Low-Residue Diet for Diverticulitis" includes the following categories: grain products, fruit, vegetables, meats and protein, and dairy. Additional fiber is gradually added to the diet as symptoms of diverticulitis improve with concomitant increase in fluid intake.11 Recommended maintenance high-fiber foods include: whole grain breads and cereals; fruit such as apples and peaches; vegetables including broccoli, cabbage, spinach, carrots, asparagus, and squash; and starchy vegetables such as kidney beans and lima beans.5 The goal of a high-fiber diet is to keep the stool soft and lower pressure inside the colon so that bowel contents move through it easily.

Conclusion
While most patients with diverticulosis are symptom free, it may result in bleeding or rupture, causing inflammation or infection, known as diverticulitis. In the elderly, since initial signs and symptoms of diverticulitis may be less pronounced and postoperative morbidity and mortality are greater, it is essential that prompt referral for medical attention and intervention is sought. Patients with mild symptoms are treated with rest, a liquid diet, and oral antibiotics, whereas those with severe symptoms are hospitalized and treated with IV antibiotics and sometimes surgery.8 Pharmacists are often in a unique position to guide patients to prompt interventional care when they are informed about the recognition and treatment of this gastrointestinal condition.