The aggressive medical management strategies for chronic disease states, such as hypertension, cardiovascular disease, and diabetes, are a characteristic component of Western medicine. Scientific data demonstrate that medicalization improves symptom-related quality of life and may reduce the risk of death. In April 2007, the Medical Expenditure Panel Survey reported that the number of purchased prescriptions had increased by one billion in seven years.1 Despite the progress made in drug development and pharmacotherapeutic management of chronic disease, there has been a trend toward increased drug-related adverse effects, adverse drug reactions, and drug-related toxicity. Health care professionals, particularly pharmacists, have a special responsibility to monitor for drug-induced toxicities to ensure optimal safety and efficacy with aggressive medication management strategies. This article explores the relationship between pharmacotherapy and pulmonary adverse effects from frequently prescribed agents used to treat common chronic diseases.

Beta Adrenoceptor Antagonists
Beta adrenoceptor antagonists, or beta-blockers, inhibit sympathetic stimulation by competitively antagonizing catecholamines at beta-1 and beta-2 adrenergic receptors found in the cardiac myocytes and vasculature. Cardioselective agents have greater affinity for beta-1 receptors, which are found primarily in the heart, while nonselective agents block beta-2 receptors, which are predominantly found in blood vessels and bronchial smooth muscle.

Beta-blockers have been used in the management of several chronic disease states, including glaucoma, ocular hypertension, myocardial infarction, congestive heart failure, and hypertension.2-4 Generally, this class of drugs is well tolerated when administered orally, topically, or intravenously. However, concerns regarding pulmonary adverse effects, particularly beta-blocker-associated bronchospasm, have triggered some diffidence in prescribing beta-blockers. These pulmonary adverse effects can be seen regardless of the route of administration or the presence of pulmonary diseases (Table 1). 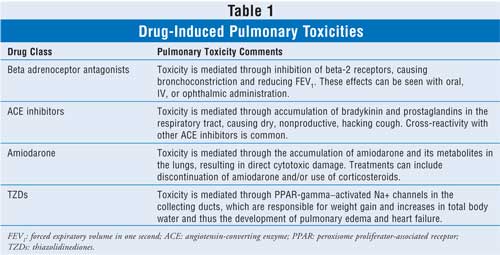 Pulmonary adverse effects have been reported with oral and intravenous administration of beta-blockers. A meta-analysis of 19 studies evaluated the effects of either single-dose treatments or therapy of longer duration (two days to 3.3 months) with the cardioselective beta-blockers atenolol, metoprolol, and bisoprolol in patients with chronic obstructive pulmonary disease (COPD). The baseline forced expiratory volume in one second (FEV1) was 2.4 ± 0.15 L in the treatment group and 2.42 ± 0.2 L in the placebo group. The analysis combined all agents into one group and showed a 7.46% reduction in FEV1 (CI 5.59-9.32%). Moreover, the FEV1 was only increased by 4.63% after administration of the beta-agonist. The number of patients with respiratory symptoms did not significantly increase (CI -0.02-0.03%).5,6

A retrospective cohort study evaluated the tolerability of the nonselective beta-blocker carvedilol in 89 patients with COPD who were taking the medication for at least three months. Carvedilol was tolerated in 85% of patients; however, the authors of this trial did not address reversible airflow obstruction or reasons why patients did not tolerate the drug.7

Ophthalmic administration of beta-blockers can also cause pulmonary effects. After topical administration, beta-blockers drain into the lacrimal ducts, where systemic absorption occurs via the nasal mucosa and the facial and ophthalmic veins. Unlike the oral route, which undergoes extensive first-pass hepatic metabolism, the topical route bypasses this metabolism, allowing higher concentrations to reach systemic circulation.8 Furthermore, the extent and timing of beta-adrenoceptor occupancy have an important role in determining the systemic effects of these drugs.9 A recent study evaluated the effects of long-term treatment with topical timolol on bronchial reactivity in patients with glaucoma who did not have pulmonary disease. The mean FEV1 at three-year and four-year follow-up was decreased since baseline in the timolol-treated group compared with the laser-treated group (P <.05 and P = .052, respectively). These effects were not reversed upon discontinuation of timolol.10

Although beta-blockers have been shown to have undesirable pulmonary effects, anecdotally, they have been shown to decrease morbidity and mortality in certain indications, such as use in patients following myocardial infarction and congestive heart failure. The relevance of a decreased FEV1 and whether this truly leads to frank, symptomatic bronchospasm at commonly used doses needs to be clinically validated.

Angiotensin-Converting Enzyme (ACE) Inhibitors
ACE inhibitors are a frequent cause of cough, with a reported incidence ranging from 1% to 12%. 11-14 This variation in frequency depends on the specific ACE inhibitor used and the patient population. For instance, captopril-associated cough has a reported incidence of 2%, whereas the incidence of perindopril- and ramipril-associated cough can be as high as 12%.15,16 The patient populations that are most susceptible to ACE inhibitor-associated cough are the elderly (older than 60), women, and certain ethnicities, including Chinese, Japanese, Indian, and black.12,16-21

ACE inhibitor-induced cough often begins as a throat tickle and progresses to a dry, nonproductive, hacking cough that is not associated with any other pulmonary abnormality (i.e., chest x-ray, spirometry).15 Symptoms may begin within one day or as late as 10 months after initiation of the ACE inhibitor.20 The exact mechanism is not fully elucidated, but most theories attribute cough to the accumulation of bradykinin and prostaglandins in the respiratory tract.22-25 ACE inhibitors prevent ACE from degradating bradykinin, resulting in bradykinin accumulation which, according to observations from experimental studies, results in cough.26-28 With continued ACE inhibitor therapy, the cough may resolve within a few weeks, but more often, discontinuation of the ACE inhibitor and initiation of an alternative therapy is required. In the latter case, symptoms resolve within a few days of discontinuation; however, some reports describe as long as one month for symptom resolution.16,29,30 Additionally, cross-reactivity with other ACE in­hibitors is common and should be avoided.16,17,19,29,31

Angiotensin II receptor blockers may be considered an alternative therapy for patients who are intolerant of ACE inhibitors (due to cough), since bradykinin degradation is not inhibited. Adjunctive therapies to treat ACE inhibitor-induced cough, such as elemental iron, theophylline, cromolyn sodium, sulindac, and bupivacaine, have been investigated; however, these therapies have proven to be ineffective and counterproductive to the underlying disease state (e.g., sulindac and hypertension) or have not been recommended for long-term use.16,17,32-34


Amiodarone pulmonary toxicity (APT) is a common lung injury, with a prevalence of between 1% and 15% of the treated population.36 An estimated incidence rate of one in 1,000 to 2,000 patients treated per year has been reported.35,37 Symptoms of APT include progressive dyspnea, malaise, nonproductive cough, and pleuritic chest pain. Case reports of APT were first published in the early 1980s, and since then, literature suggests that APT is a current problem in clinical practice.36,38-40

APT is most commonly seen in men older than 40. Risk increases with age, preexisting lung disease, and dosage and duration of therapy.41 Some speculate that risk of APT only develops with higher daily doses of amiodarone (e.g., >500 mg/day); however, the literature has shown that there is an elevated risk of APT in patients who take up to 200 mg/day.42 On average, APT develops in 10% of patients taking more than 500 mg/day; the risk of APT is reduced to 0.5% in patients taking up to 200 mg/day.38,43,44

The proposed mechanism of APT is driven by the accumulation of amiodarone and its metabolite, desethylamiodarone, in the tissues of the lung. This accumulation leads to direct cytotoxic damage and indirect immunologic reactions.35,45 APT can be identified through chest radiography (chest x-ray), CT scan, and pulmonary function tests.36

Most cases of APT develop within the first 1.5 years of treatment.36 Time to onset can be quicker in patients taking greater doses. Some case reports detail patients developing APT eight months after the discontinuation of amiodarone; this delayed adverse effect may be related to the accumulation of amiodarone in the lung.36,46

Controversy exists over the addition of corticosteroids for the management of APT after discontinuation of amiodarone. The endorsement for the use of corticosteroids in managing APT has been determined by case reports and expert opinion, and there is some guidance available for their use: (1) initial dosage should range from 0.75 to 1 mg/kg of prednisolone or equivalent; (2) initial dosage should be maintained until definite clinical and radiographic response is obtained; otherwise, increased doses should be considered; (3) corticosteroid taper should be slow; (4) estimated duration could range from six to 12 months; (5) patients should be monitored after discontinuation of corticosteroids for possible recurrence of APT.36,48-50

Thiazolidinediones (TZDs)
TZD-induced pulmonary edema and heart failure are of growing concern, since the incidence and prevalence of type 2 diabetes continues to increase worldwide and TZDs gain acceptance as guideline-recommended first-line therapy following diet and lifestyle changes in patients with diabetes.51 Landmark, randomized trials are also reporting an increase in TZD-induced edema and heart failure in patients with and without macrovascular disease primarily from expanded intracellular volume due to altered handling of sodium in the renal collecting duct.52-54

Edema has been reported in 7.2% to 12.4% of patients receiving a TZD in combination with other oral hypoglycemics and in up to 15.2% of those using a TZD with insulin.55,56 The increased frequency of heart failure in patients taking both TZDs and insulin has led both European and Canadian health agencies to consider insulin therapy as a contraindication to TZDs.57,58

The time of onset to edema and heart failure with TZDs ranges from several days to weeks and remits with discontinuation and aggressive diuresis with furosemide. This strongly suggests that TZDs are responsible for new edema, the exacerbation of existing heart failure, and new cases of heart failure. Risk factors for TZD-induced edema or heart failure include established heart failure, left ventricular hypertrophy, valvular disease, chronic renal failure or insufficiency, age 70 or older, atherosclerosis, hypertension, obesity, history of diabetes 10 years or longer, and concurrent insulin or sulfonylurea use.59-62 The American Diabetes Association allows patients with stage I or II heart failure to receive TZDs;51 however, other experts are prudent and caution that TZDs should be avoided in all heart failure patients, including those in stage I or II.62

A reasonable pharmacologic explanation and recent finding suggests that peroxisome proliferator-activated receptor-gamma (PPAR-gamma)–activated Na+ channels in the collecting ducts are responsible for weight gain and increased total body water with TZDs. PPAR-gamma agonists promote enhanced sodium absorption in the collecting duct, which results in fluid retention and plasma volume expansion, which in turn can result in new heart failure. This finding also explains the trend toward small reductions in hemoglobin and hematocrit, which can result in a mild dilutional anemia that has been associated with TZDs. Selective deletion of the PPAR-gamma–activated channel through genetic deletion in mice fails to result in increases in total body water in the presence of a TZD. Amiloride, a selective inhibitor of sodium absorption in the collecting duct, also prevents increases in plasma volume and total body water in the presence of a PPAR-gamma agonist.63 Other mechanisms include reversible PPAR-gamma–mediated pulmonary endothelial hyperpermeability, which is four times greater than normal at doses in the higher therapeutic range, with the clinical implication of predisposing patients to pulmonary edema.42 This combination of PPAR-gamma agonist–induced increases in sodium reabsorption in the collecting duct and plasma volume expansion along with enhanced pulmonary endothelial hyperpermeability may result in clinically significant pulmonary edema and heart failure, especially in patients with a history of heart failure, established cardiac disease, or renal failure.

Conclusions
The improvements in chronic disease outcomes that stem from aggressive medical management require increased pharmacist awareness and monitoring for the possibility of new drug-induced adverse events--in this case, a review of the mechanisms associated with drug-induced pulmonary adverse events. Beta-blockers, ACE inhibitors, amiodarone, and TZDs account for the majority of drug-related pulmonary toxicity but are just some of the agents known to cause or exacerbate pulmonary adverse events. Drug-associated pulmonary adverse events occur more frequently in patients with predictable underlying risk factors, such as established pulmonary disease, heart failure, or advanced age, and can present in many ways, such as dyspnea on exertion, pleuritic chest pain, or dry cough. In order to ensure optimal medication management, pharmacists should take an active role in identifying patients at risk for drug-induced pulmonary toxicities, monitoring patients, and providing patient education. Pharmacists may also help patients make informed decisions regarding the long-term use of medications with established pulmonary toxicity profiles. Some patients may not be able to readily interpret and apply concepts of drug-induced toxicity, so pharmacist-driven coaching and education can be helpful when patients are deliberating the trade-offs of symptom-related mortality or drug-related morbidity.