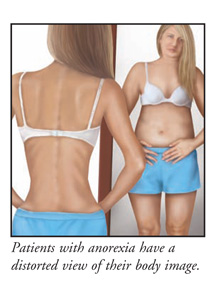 An eating disorder is an abnormal eating behavior that leads to serious physical and emotional problems. Patients who suffer from eating disorders present with a wide range of symptoms, and all do not respond equally to treatment. For most patients, eating disorders result from psychological, social, or biologic factors, or a combination of these. Those who suffer from these devastating diseases are obsessed with food and body image, which they use as an outlet to deal with serious problems in their lives.

Researchers are still trying to understand the reason eating disorders develop in the first place. They may have a genetic link or be a result of an imbalance of chemicals in the brain. They often begin slowly with small changes in diet (undereating or overeating), but they change over time into obsessive behaviors that become out of control. Patients with depression, anxiety, or who lack control in their lives are often victims of eating disorders. Social pressures that equate “thin” with “beautiful” can trigger eating disorders, especially in those with poor self-esteem. Difficult personal or family relationships are also common in people who develop eating disorders.

The best-known eating disorders are anorexia nervosa and bulimia nervosa. Anorexia is characterized by strict dieting, excessive exercise, vomiting, and laxative or diuretic use in order to lose weight. Patients with anorexia have a distorted view of and obsession with their body weight. Although they are emaciated, they still see themselves as “fat” and work endlessly to achieve what they think is a satisfactory body image. Patients with bulimia eat large amounts of food during a period of bingeing and then follow this with purging behavior (vomiting and/or using laxatives or diuretics), intense exercise, or fasting to avoid gaining weight. Although patients with bulimia may actually be normal weight, they are like patients with anorexia in that they have a fear of getting fat and have a distorted view of their body size.

Therapy for eating disorders depends on the specific patient, their physical condition, and their eating behavior, as well as the underlying cause of the behavior. Most patients respond to a combination of psychotherapy, nutritional support, and medication, if appropriate.

Eating disorders can affect anyone, from teens to older adults, although they are more common in adolescents. Women are much more likely to develop eating disorders, although men can also suffer from this problem. The condition often starts slowly, with the person eating less or more, and eventually becomes an urge that is hard to resist—to lose weight or to overeat compulsively. For most sufferers, eating disorders are accompanied by secrecy, shame, and despair. Instead of giving them the control they desire, the obsession with food takes control of its victims and their lives become out of control.

Patients suffering from anorexia practice strict diets, and may exercise, vomit, or use laxatives and diuretics to lose weight. Perfectionism is often a personality trait associated with anorexia. This obsessive behavior with food centers around the power to control, along with a distorted view of the person’s body weight. Even when grossly underweight, patients with anorexia see themselves as fat. If allowed to continue their abnormal eating patterns, they can suffer from serious medical problems such as anemia, electrolyte imbalances, dehydration, and even death.

Those who suffer from bulimia live in cycles of overeating, followed by purging the excess calories to avoid gaining weight. Purging may take the form of vomiting; laxative, enema, or diuretic use; and/or excessive exercise. Patients with bulimia are often normal weight, but they are not satisfied with their weight or appearance. They may appear to eat normally but secretly purge themselves after bingeing to alleviate guilt associated with overeating. They may diet for a short time but then return to the cycle of overeating and purging. If purging continues for a period of time, patients with bulimia may develop medical complications such as esophagitis, erosion of tooth enamel, gastrointestinal problems, dehydration, and sores in the mouth, gums, or throat.

People with eating disorders often suffer from several triggers in their lives that contribute to an abnormal obsession with food and body image. Modern Western society values a “perfect” body and equates beauty with a specific physical appearance and weight for both women and men. Preoccupation with food and weight may begin slowly or may be triggered by a change in life such as pregnancy or loss of a loved one. Often people who are at risk for these disorders are those with poor self-images in the first place, perhaps having been teased for their physical appearance or physically abused. They may be lonely, angry, or suffer from depression or anxiety disorders. There is evidence that eating disorders may occur more frequently in families, suggesting a genetic component. In some people who develop an eating disorder, an imbalance in brain chemicals may be the basis for the out-of-control behavior.

Treatment for eating disorders typically includes an assessment by a physician to determine whether a patient is suffering from physical complications of their condition. If the patient is determined to be in serious medical danger, entry into a hospital treatment program is indicated. If a patient’s condition is less serious, a psychologist will devise a treatment plan specifically for that patient. This plan may include admittance to a day or inpatient program for psychological and nutritional therapy, or the patient may be allowed to continue living at home while attending regularly scheduled therapy sessions. Drug therapy, including antidepressants, antianxiety medications, or other medicines used to treat concurrent psychological problems, are prescribed, when appropriate.