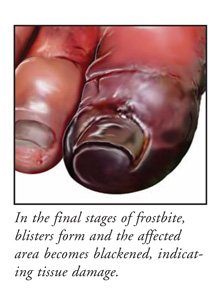 Frostbite occurs when skin and the tissue underneath it literally freeze as a result of exposure to extreme cold. In the first stage of frostbite, sometimes referred to as frostnip, the skin is numb and white, but no permanent tissue damage occurs once the area is thawed. If the skin and tissue continue to be exposed to cold temperatures after this initial stage, the blood vessels in the skin constrict and blood stops flowing through the tissue. Eventually, the fluid in the cells of the skin and tissue freezes, leaving the area permanently damaged.

Frostbite occurs most often in the skin and tissue of the fingers, toes, ears, nose, and face. When skin and tissue are exposed to extreme cold for an extended period, the first symptom may be a feeling of prickling or pins and needles beneath the skin, followed by numbness, aching, and throbbing. As the skin and tissue continue to freeze, the area eventually loses all its feeling and becomes white and hard.

Once frostbite has occurred, first aid should be administered until medical help is available. First aid for frostbite includes moving the individual to a warm location, removing any wet or tight clothing, and wrapping the area in sterile gauze before seeking emergency-room assistance. If no emergency- care facility is close by, the frostbitten area can be carefully warmed using warm-water soaks or warm, wet cloths for up to 30 minutes until the area is soft and the pink color has returned.

As the frostbitten area begins to thaw, it becomes red and intensely painful. If frostbite has caused the blood supply to constrict and the tissue to freeze, damage to the tissue and surrounding tendons and muscles may not be reversible upon thawing. In cases of severe frostbite, amputation of the affected area is sometimes necessary. The treatment of severe frostbite with clot-busting drugs is currently being studied to determine whether reopening the constricted blood vessels and reversing the clotting that occurs when the tissue freezes can render amputation unnecessary.

Anything That Causes Poor Circulation Increases the Risk

Frostbite occurs when skin and tissue freeze as a result of being  exposed to extreme cold for an extended period of time. The most common areas to be affected are those most likely to be exposed to the cold, including the hands, feet, and face.

In the early stages of frostbite, the skin and tissue may appear gray or yellow, but the area remains soft and has some feeling. Sometimes a pins-and-needles sensation or throbbing occurs, eventually followed by numbness. If the area continues to be exposed to extreme cold, it becomes completely numb, white, and hard. If the frostbitten tissue is thawed in the early stages, it becomes warm, red, and soft. Thawing is usually accompanied by an intense, burning pain. If the frostbitten tissue is not warmed before serious damage has occurred, it often forms blisters; if this tissue is not removed, gangrene can develop.

Anything that leads to poor circulation in cold weather increases the risk of frostbite, especially tight or restrictive clothing or footwear. Chronic conditions that involve poor circulation, such as diabetes, peripheral vascular disease, peripheral neuropathy, and Raynaud’s phenomenon, can also increase a person’s risk of developing frostbite. Drugs that cause decreased blood flow to the extremities, such as beta-blockers and nicotine, can also increase this risk. When a cold environment is combined with windy conditions, heat escapes more quickly from the skin’s surface and frostbite is more likely to develop. The same is true when wet clothing is worn in cold weather, since wet clothing is poor insulation against the cold.

Treatment for frostbite can be managed at home if warming begins in the early stages, but medical assistance is needed for extensive, late-stage frostbite. Once the individual is moved to a warm place, clothing can be removed and the area wrapped with sterile bandages before emergency care is sought. If emergency care is unavailable or the skin and tissue are not yet frozen solid, warm-water soaks can be used to slowly thaw the area. The skin should never be rubbed with ice or covered with ointment. Dry heat (hair dryer, heating pad) should never be  used, as it could burn the tissue. Thawing should be started only if there is no chance of refreezing, as refreezing would further damage the frostbitten tissue. If the skin begins to blister, swell, or turn purple or blue while warming, immediate emergency care is recommended. The area should be elevated and wrapped for travel (wrap fingers and toes individually) so that the skin is not disturbed by friction.

Doctors are testing a new treatment for severely frostbitten tissue. The injection of a clotbusting drug into tissue with poor blood flow has proven to have a positive effect on restoring circulation in early trials. More research will show the best drugs to use to help save frostbitten tissue that might otherwise require amputation.

Prevention of frostbite should be a person’s primary consideration before going into a cold environment for an extended period. Limiting the amount of time spent outdoors, layering clothes to keep them dry, protecting exposed areas of the body most likely to become frostbitten, and wearing waterproof and windproof clothing are all commonsense methods of avoiding frostbite.