Diabetes mellitus is a group of metabolic disorders in which the body does not produce enough or properly use insulin, resulting in hyperglycemia. Two major types of diabetes mellitus are recognized. Type 1, previously known as juvenile diabetes, is the result of the body's failure to produce enough insulin. This type of diabetes is prevalent in 5% to 10% of the diabetic population and is generally diagnosed in children.1 Type 2 diabetes is a result of insulin resistance (a condition in which the body cannot properly use insulin). This type of diabetes is more prevalent and is generally diagnosed in adults.

Incidences of diabetes are increasing at epidemic proportions. According to the estimates of the World Health Organization, there are more than 180 million people with diabetes worldwide and this number is likely to more than double by 2030.2 The American Diabetes Association estimates that more than 20 million adults and children in the United States (which accounts for approximately 7% of the U.S. population) have diabetes.3 While more than 14 million patients have been diagnosed with diabetes, over six million individuals are estimated to be unaware of the fact that they have the disease and remain untreated.3

Hepatotoxicity in the Diabetic Population
Until now, the link between risk of hepatic failure and diabetic condition was unclear. Recently, a large prospective cohort study was performed to examine whether patients with type 2 diabetes are at an increased risk of developing acute liver failure.5 This study suggested that diabetic patients are twice as likely to suffer hepatic failure compared to normal patients. Another study of the same prospective cohort population indicated that diabetes is associated with increased risk of hepatocellular carcinoma and chronic liver diseases. 6

Hypoglycemic Agents in the Treatment of Diabetes
Many therapeutic drugs target both fasting and postprandial hyperglycemia and other metabolic parameters involved in the diabetes-associated complications. These drugs are directed towards increasing insulin secretion, decreasing insulin resistance, and increasing insulin penetration into the cells. Antidiabetic drugs with reported cases of hepatotoxicity include sulfonylureas, alpha-glucosidase inhibitors, biguanides, and thiazolidinediones (Table 1). 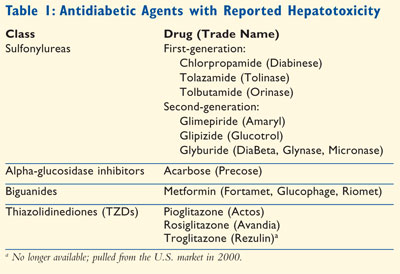 Alpha-Glucosidase Inhibitors
The glucosidase inhibitors are useful adjunctive therapies for type 2 diabetes. The prototype of this class is acarbose (Precose). Because acarbose is minimally absorbed in unchanged form after oral administration, the drug is widely believed to be safe, with only flatulence as a commonly reported complaint. However, cases of severe hepatotoxicity have been reported.10-12 Although acarbose-induced hepatotoxicity appears to be uncommon, diabetic patients receiving long-term acarbose therapy should be closely monitored for this adverse effect.

Biguanides
Metformin hydrochloride is widely used for the treatment of type 2 diabetes. A serious but rare side effect, lactic acidosis, is caused because of its interference with mitochondrial oxidative processes.13 Metformin (Fortamet, Glucophage, Riomet) hepatotoxicity has rarely been reported, with two cases of acute hepatitis and one of bland cholestasis.13-15 A well-documented case of acute hepatitis caused by an idiosyncratic adverse reaction to metformin or to one of its metabolites, has also been reported. 13

Troglitazone: Troglitazone (Rezulin), a peroxisome proliferators–activated receptor gamma agonist that enhances insulin sensitivity, was approved for the treatment of type 2 diabetes in 1997.16 It was an effective antidiabetic drug with a fundamentally new mechanism of action. However, within a year after its widespread use, individual cases of liver injury and failure were reported.16-19 The mounting evidence for the idiosyncratic hepatotoxicity of troglitazone in the following years led to its withdrawal from the market in 2000.

Since then, a considerable effort has been made to elucidate the mechanism of troglitazone-induced hepatotoxicity. A number of hypotheses were brought forward to explain troglitazone-induced cell injury, including the formation and accumulation of toxic metabolites, mitochondrial dysfunction and oxidant stress, inhibition of the bile salt transporter and bile acid toxicity, and the induction of apoptosis.17

Pioglitazone and Rosiglitazone: After the withdrawal of troglitazone due to hepatotoxicity, only pioglitazone (Actos) and rosiglitazone (Avandia) can be used for the treatment of patients with type 2 diabetes. Fortunately, these two newer drugs in the TZD class have a much larger margin of safety for liver toxicity. Very rare reports of liver toxicity, usually milder and reversible, have been seen with these drugs. Very few case reports have implicated it as a cause of hepatocellular injury and granulomatous hepatitis.20-22 Severe cholestatic hepatitis caused by rosiglitazone (8 mg/day) was reported in a 56-year-old female patient who had a history of receiving troglitazone treatment; it is indicated that rosiglitazone is not always a safe alternative in patients who had liver injury due to troglitazone.23 Pioglitazone-induced hepatocellular-cholestatic liver injury in a 49-year-old patient with diabetes who was on this drug for six months. Liver enzyme values returned to normal six weeks after the patient discontinued pioglitazone therapy.24

In conclusion, while pharmacovigilance for hepatotoxicity is probably still warranted, the practitioner and patient can be fairly confident that these drugs are safe from a liver standpoint. Finally, recent work would suggest that these agents may prove useful to reduce hepatic fat in patients with nonalcoholic steatohepatitis and may possibly protect against adverse metabolic consequences and the ultimate development of cirrhosis in patients with fatty livers.

Pioglitazone and rosiglitazone are used either as monotherapy or in combination with metformin, sulfonylureas, or glinides. The combination of TZDs with insulin is also appealing, as it allows improvement of glycemic control while decreasing the daily insulin requirement. Insulin dosage has to be adjusted regularly to avoid hypoglycemic episodes. Recently, a prospective, open-labeled, nonrandomized study was conducted to assess safety and efficacy of rosiglitazone and insulin treatment in combination with poorly controlled insulin-treated patients with type 2 diabetes.25 It was concluded that the rosiglitazone plus insulin combination is safe and effective in this population. However, further studies are warranted.

Sensitivity of Hepatotoxicants in Diabetic Rodent Models
Hepatotoxicity of several structurally and mechanistically diverse chemicals (i.e., acetaminophen; bromobenzene; carbon tetrachloride; chloroform; 1, 1, 2-trichloroethane; D-galactosamine; and thioacetamide) is significantly altered in streptozotocin- or alloxan-induced type 1 diabetic rats.26-29 The majority of the studies have pointed out that hepatotoxicant-induced liver injury is potentiated in type 1 diabetic rats. Similarly, hepatotoxicity of allyl alcohol, bromobenzene, carbon tetrachloride, and thioacetamide have been shown to potentiate in type 2 diabetic rats.30 Interestingly, chemical-induced liver injury is differently modified by diabetes in murine models. In contrast to the enhanced hepatotoxicity in diabetic rats, diabetic mice (type 1 as well as type 2) are protected from normally lethal hepatotoxicant challenge.31-34 Current understanding of altered hepatotoxicity of xenobiotics in diabetes is summarized in Table 2. 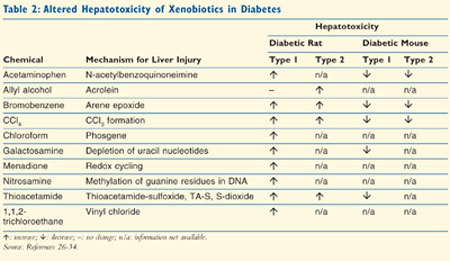 Remarkable species differences have been observed in rodent models. Diabetic rats exhibit marked sensitivity versus diabetic mice exhibiting equally marked protection from drug-induced hepatotoxicity. Availability of the rodent diabetic models offers a unique opportunity to uncover mechanisms of clinical interest in averting human diabetic sensitivity to drug-induced hepatotoxicities. While the rat diabetic models appear to be suitable, the diabetic mouse models might not be suitable in preclinical testing for potential hepatotoxic effects of drugs or toxicants, because regardless of type 1 or type 2 diabetes, mice are resistant to acute drug-or toxicant-induced toxicities.35