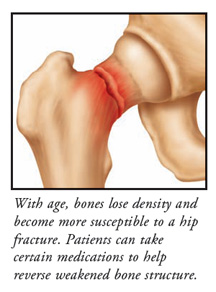 Hip fractures are typical in the aging population. Although the majority of patients who break a hip eventually recover most of their ability to function, a broken hip in an older patient can mean a permanent loss of independence. Current surgical correction of hip fractures allows most patients to regain their previous mobility. However, a fractured hip is still a serious condition that may lead  to life-threatening complications.

Most hip fractures cause hip pain and an inability to use the affected leg. In some patients, the hip and leg may be turned outward in an unusual position, or the leg below the broken hip may be shorter than the opposite leg. Once a diagnosis of hip fracture is made, the area in which the fracture has occurred is identified by x-ray, CT scan, or MRI. Most hip fractures occur in either the upper part of the femur bone, called the femoral neck, just below the head of the femur (circular ball-shaped area), or in the intertrochanteric or subtrochanteric area of the upper femur bone. As with any broken bone, the hip bone may be cracked, broken through, aligned in place, or the edges may be separated. In most cases, surgery is used to correct a hip fracture. Surgery may include screwing the fractured parts of the bone together or to a metal plate, replacing the broken areas of the femur with a metal prosthesis, or replacing the upper part of the femur and the hip socket with a prosthesis (total hip replacement).

Since hip fractures are almost always avoidable, it is especially important for people as they age to keep their bones strong and take steps to prevent falls by following a few simple rules.

A Growing Problem Among the Elderly

Hip fractures are relatively common in older individuals, and with the aging of the United States population, they are projected to become an even bigger problem in the years to come. Ninety percent of the approximately 300,000 patients who suffer from broken hips in the U.S. each year are older than 60; billions of dollars are spent annually on the treatment of these patients.

The primary cause of hip fracture is trauma to the hip. For younger patients, this may be caused by an automobile accident or sports injury. For older patients, the most likely cause is a fall. But with brittle bones, a hip can be fractured with almost no trauma at all during a routine activity. As a result, one of the biggest risks for hip fracture is older age; with increased age comes increased muscle weakness, poor balance, and weakened bone density (osteoporosis). Since women are at greater risk of osteoporosis as they age, their risk of hip fracture is twice to three times that of men. Certain medications, such as long-term corticosteroid therapy, can weaken bones; other drugs, such as sedatives or antihypertensives, cause balance disturbances. Patients with diseases that increase the risk of falls, such as arthritis, Parkinson’s disease, and dementia, are also at an increased risk for hip fracture.

The most common symptom of hip fracture is pain in the hip area, making it difficult to put weight on the affected hip. There may be signs of injury such as swelling or bruising around the hip joint. There may be bleeding into the tissue if the broken bone has damaged any blood vessels. The leg on the side of the hip fracture may be shorter than the other leg, or it may be turned out instead of laying straight. In rare cases, there may be such little pain associated with the hip fracture that the patient does not realize there is a fracture but may complain of mild pain in the hip or pelvic area. Diagnosis is made using an x-ray, CT scan, or MRI in combination with a complete medical history and physical examination.

In most cases, hip fractures are treated with surgery. In patients who are not ambulatory or who are not suitable candidates for surgery, traction can be used if appropriate for the type of fracture. If surgery is performed, recovery requires a rehabilitation period using a walker or similar aid. Recovery from a hip fracture is a slow process that can take many months and depends on the type of fracture and physical condition of the patient prior to injury. Many patients who have hip fractures require a temporary stay in a rehabilitation center or nursing home before they can return to normal activities. Hip fracture is a serious condition and can have complications, including confusion, depression, blood pressure changes, electrolyte imbalances, infection, blood clots, and pulmonary embolisms. Medications used to manage pain can also cause sedation, nausea, and constipation, which can be significant problems for older patients.

Hip fractures can be prevented by keeping bones strong. Women should have a bone density test around the time of menopause to determine if they need to begin treatment to reverse or prevent osteoporosis. Calcium and vitamin D supplementation, weight-bearing exercise, and medications that help reverse weakened bone structure (bisphosphonates, raloxifene, and calcitonin) are all effective steps in preventing future hip fractures for both men and women. Preventing falls is also key, since falls are the primary cause of hip fractures. Eliminating throw rugs, adding handrails to steps around the house, and maintaining good lighting (especially at night) are all simple ways to avoid falls. Some patients are advised to wear hip protectors during the day; these soft pads are worn underneath clothing to protect from future fractures.