With the advent of warmer weather, seasoned pharmacists anticipate an onslaught of patients seeking assistance with summer-related illnesses, such as sunburn, poison ivy, and insect-related problems. The incidence of insect stings and bites has steadily risen over the past several decades as the earth's climate has warmed. Warmer winters kill fewer insects, allowing their populations to grow and increasing the risk of human–insect contact. While some creatures discussed here are actually arthropods, the lay public popularly describes them all as insects. The term insects will include arthropods for purposes of this article.

The Range of Troublesome Insects Bothersome insects fall into several categories. The genus Hymenoptera encompasses winged stinging insects such as wasps, bees, and yellow jackets, as well as wingless ants. Biting insects (and arthropods) include blood-dependent varieties such as ticks, mosquitoes, bedbugs, chiggers, along with spiders, scorpions, and centipedes.

Minor Reactions The consequences of insect stings and bites are as broad as the genera that produce them. Thus, pharmacists must distinguish between minor reactions that can be treated with self-care and more serious insect-related problems that should be referred to a physician or an emergency room. Most insect stings are of little consequence.1 The discomfort from stings of wasps, bees, ants, and yellow jackets is transient. Similarly, most insect bites are minor nuisances, such as those from mosquitoes, non–disease-carrying ticks, chiggers, and bedbugs.

Treatment of Minor Insect Sting/Bite Reactions: Most minor insect-related reactions can be treated with traditional nonprescription products. Generally, the patient should not use the products more than seven days and should see a physician if the condition clears up but recurs within a few days. Effective ingredients include local anesthetics. However, some (e.g., lidocaine, dibucaine, tetracaine) may cause toxicity, including tremors, convulsions, and cardiac arrest. Thus, pharmacists should choose products containing safer local anesthetics, such as dyclonine, benzyl alcohol, benzocaine, and pramoxine. External analgesics/counterirritants (e.g., menthol, camphor, methyl salicylate) may also provide relief. Many products contain these ingredients, including Dermoplast Hospital Strength Aerosol (20% benzocaine, menthol 0.5%), Americaine Aerosol (20% benzocaine), and Itch-X Spray/Gel (10% benzyl alcohol, 1% pramoxine HCl).

Hydrocortisone (e.g., Cortaid, Cortizone, Lanacort) has antipruritic and anti-inflammatory effects. The patient should stop use if the bite worsens, lasts more than seven days, or clears up but recurs within a few days.

Treatment of Hives Due to Insect Stings:Insect stings may cause raised lesions known as urticaria, or hives. The only product FDAapproved for hives is Claritin Hives Relief, with 10 mg of loratadine per tablet, appropriate for patients ages 6 and older. It should not be used if the hives are an unusual color or appearance (bruised or blistered), on hives that do not itch, or in patients who are pregnant or breast-feeding, have liver/kidney failure, are allergic to loratadine, or are taking loratadine for any other reason (e.g., allergic rhinitis). It must not be used if the patient experiences symptoms of anaphylaxis, such as trouble swallowing, dizziness, unconsciousness, tongue swelling, perioral or intraoral inflammation, dysphasia, drooling, wheezing, or dyspnea. These patients require immediate emergency care.

Africanized "Killer Bees" and Fire Ants: Fire ants and killer bees are increasingly responsible for major problems throughout large areas of the . They share several traits: extreme pugnacity, lack of natural predators, and the tendency to gradually increase their range as the average winter temperatures creep upwards.

Africanized killer bees are an accidental hybrid created when African bees under investigation by a bee geneticist escaped into the Brazilian forest and mated with native bees. These aggressive bees entered the through in 1990 and have spread through the Southwest.13,14 The hybridized bees exhibited extreme responses to perceived threats. The number of Africanized bees responding to a threat is three to four times larger than honeybees, and the number of stings they deliver is eight to 10 times greater.13 They will pursue a running person for a considerable distance. Patients with a few stings will recover uneventfully in most cases.

There are two subspecies of imported red fire ants (Solenopsis invicta), both native to . The black subspecies originally entered the U.S. around 1918, and the red subspecies in the 1930s, both through a port in Mobile, Alabama.14-16 Since then, their range has grown to encompass at least 13 states (southeastern and south central states, New Mexico, and California).17 Unfortunately, fire ants breed with native species, which yields hybrids with an increased resistance to cold temperatures, allowing further extension and increasing the chances that pharmacists in northern states will eventually encounter their victims.18 At least 30% to 60% of people living in infested areas experience fire ant stings each year, and fire ants have overtaken flying vespids as the leading cause of anaphylaxis. The ant's biting/stinging habits differ markedly from those of typical red ants encountered by most Americans. Red ants bite and spray acid, but fire ants bite their victim with the mandibles and remain attached while they pivot around in a circle, stinging repeatedly and causing burning pain.19 The result is a sting with more serious consequences than standard ant stings. A pustule forms within 24 to 48 hours, progressing to a white blister.15 If the blister ruptures, scarring and secondary infection are possible risks. Pruritus persists for several days. Furthermore, multiple stings are typical due to the ants' propensity to swarm from their mound at the slightest provocation, each ant driven by pheromones to inflict as many stings as possible. Therefore, a patient asking the pharmacist for assistance may have suffered several hundred stings, experiencing considerable discomfort. Concern about fire ants is growing rapidly due to their habit of foraging in private homes and health care facilities (e.g., nursing homes). In a rising number of cases, fire ants have been discovered in the midst of mass attacks on people with impaired consciousness or a limited ability to seek help.20 Mass attacks resulted in the near death of a five-day-old infant, the death of a 3-month-old infant, cardiopulmonary arrest in a 72-year-old male nursing home resident, and respiratory arrest culminating in the death of an 85-year-old nursing home resident.20 Pharmacists in fire ant–infested areas should refer patients with large numbers of stings, as nonprescription products may not provide relief. 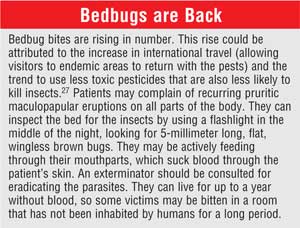 Ticks: Although tick bites were once thought to be a minor nuisance, that changed with the advent of two bacterial infections transmitted by them: Rocky Mountain Spotted Fever (RMSF) and Lyme disease. While repellents containing DEET will reduce the risk of tick bites, they must be used according to labeled directions, as they may otherwise produce adverse reactions. Permethrin is a spray repellent used for ticks and other crawling arthropods but is only applied to clothing, sleeping bags, tents, and mosquito netting.21 A residual remains in the linen after application for many washing cycles. Patients should be urged to inspect themselves thoroughly after entering wooded areas where ticks are known to exist.

RMSF has an incidence of 2.2 cases per million citizens, with 56% of cases occurring in North and South Carolina, Tennessee, Oklahoma, and Arkansas.22,23 RMSF presents with sudden onset of fever, nausea, headache, muscle pain, and a rash, usually on the arms or ankles.22-24 The nonspecific nature of these symptoms may cause patients to ask for advice in choosing a nonprescription product. When any of the cardinal symptoms appear in isolation, nonprescription products may be useful, as they are often harmless. However, the pharmacist must be alert to the symptoms coexisting in the same patient. It is helpful to ask the patient about a recent history of hiking in grass or weeds.

Lyme disease symptoms include fever, chills, muscle and joint aches, headache, fatigue, swollen lymph nodes, and a characteristic bull's eye skin rash known as erythema migrans.25,26 The rash begins at the site of the tick bite, starting three to 30 days postbite. The rash will expand slowly and may eventually be 12 inches in diameter. The center often clears, giving it the appearance of a bull's eye. Lyme disease and RMSF can both produce permanent adverse effects. However, if these infections are recognized early, appropriate treatment can prevent long-lasting morbidity. The pharmacist can be a key player in referring patients with a history of possible tick bite and suspicious symptoms. 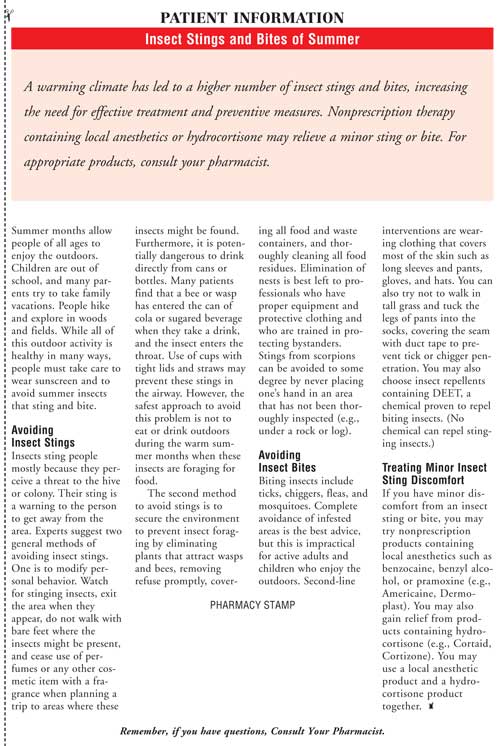