Each year, approximately 3.6 million outpatient visits in the United States are attributed to low back pain (LBP). It is considered the second most common neurologic disease as well as the fifth most common reason for physician visits.1 LBP is also regarded as the most common cause of job-related disability, resulting in significant societal burden. Indirect costs related to LBP total $30 billion annually, with approximately 2% of the U.S. workforce compensated for back injuries.1,2 Reported rates of LBP are higher in Caucasians than in any other ethnic group.3 The incidence of LBP is higher in females than in males and more common in adults older than 25 years of age who do not have a high school  or general equivalency diploma.3 The prevalence of chronic lower back pain (CLBP) in the U.S. is 27%, with an onset likely occurring between the ages of 45 and 64.1,3

CLBP has a significant impact on quality of life (QOL) and functional status, and its treatment remains challenging. Many options are available for the management of CLBP; however, there is significant variability in patient response and preferences for treatment. Therefore, health care professionals must recommend therapeutic regimens that are individualized and appropriate to meet patient- and provider-specified goals of therapy. This article provides an overview of pharmacologic and nonpharmacologic treatments for the management of CLBP.

Assessment
LBP can be broadly classified as either nonspecific, associated with radiculopathy or spinal stenosis, or associated with another specific spinal cause.4 For the latter, the presence of neurologic deficits in conjunction with LBP may be indicative of a neoplasm, infection, or cauda equina syndrome (nerve root compression secondary to spinal disk herniation).4 Additional red flag symptoms include age greater than 50 years, unexplained weight loss, urinary retention, and fecal incontinence. When assessing CLBP, clinicians should inquire about pain onset, severity, quality, and precipitating factors. Therapies that have been attempted with or without response, alterations in functional status, and impact on overall QOL should also be investigated. Additionally, the identification of psychosocial factors that may be associated with poor outcomes should be addressed to prevent delays in recovery.5 These factors include concomitant depression, job dissatisfaction, and disputed compensation claims.5 Diagnostic imaging should be reserved for use in patients with red flag symptoms. There is no evidence to support that CT or MRI improves outcomes in patients presenting with nonspecific LBP.6

Approaches to Therapy
The cornerstone of the management of CLBP is the patient's desire to achieve self-selected goals of therapy. Patients should be encouraged to remain physically active and have a dynamic role in the management of their pain. Once pain and its effects on functioning and QOL have been assessed, the clinician should consider the potential benefits, risks, and evidence to support the use of available analgesics. The pharmacologic therapies recommended for the treatment of CLB are summarized in Table 1. Nonopioid analgesics such as acetaminophen should be considered as first-line options.4 For patients who fail to respond to self-care and analgesics alone, a trial of a nonpharmacologic intervention such as acupuncture can be recommended.4 When beginning analgesic therapy, patients should be reevaluated on a monthly basis, and follow-up visits should occur frequently to assess for efficacy of current regimens and perform therapeutic modifications. Changes in pain severity, functioning, and QOL should be assessed at every visit along with analgesic efficacy and safety. 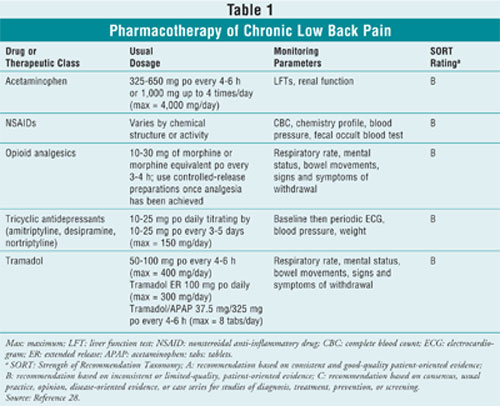 Nonpharmacologic Therapies
Nonpharmacologic therapies for CLBP such as acupuncture, massage, transcutaneous electrical nerve stimulation (TENS), and spinal manipulation may be considered to induce analgesia and improve functioning. Recent studies have found acupuncture to be possibly effective for the short-term treatment of CLBP when compared to placebo; however, it has not been shown to be more effective than analgesics or spinal manipulation.7 Massage, defined as soft tissue manipulation via hands or mechanical devices, has also been studied and has been shown to be moderately effective in the management of CLBP. Trials using either acupuncture massage or licensed massage therapists resulted in more pain reduction.8 TENS is a small battery-operated unit that delivers pain relief by using small surface electrodes on the body to generate continuous electrical impulses. Data on the use of TENS therapy in the management of CLBP are conflicting. Smaller, lower-quality trials have shown TENS to be superior to placebo, whereas larger, higher-quality trials have demonstrated no benefit.9 When compared to other nonpharmacologic treatments, TENS has been shown to be in some cases superior to massage and equally effective as acupuncture. Spinal manipulation involves the adjustment of the spine and synovial joints by high-velocity thrusts.10 It has been shown to be superior to placebo and sham manipulation in the management of both acute and chronic LBP. Some studies suggest that it is also superior to both acupuncture and TENS; however, spinal manipulation can increase the risk of lumbar disk herniation.11

Overview of Pharmacotherapy
Prior to seeking medical advice, many patients with LBP will try OTC medications. According to the joint clinical practice guidelines developed by the American College of Physicians and the American Pain Society, clinicians should recommend the use of evidence-based pharmacologic therapy along with self-care methods.4 There are various classes of medications that have demonstrated efficacy for the management of CLBP. The use of nonopioid analgesics such as acetaminophen (APAP), nonsteroidal anti-inflammatory drugs (NSAIDs), or cyclooxygenase-2 (COX-2) inhibitors for initial management of LBP is recommended,4 whereas the use of muscle relaxants should be avoided in patients with CLBP. 12 Treatment of mild CLBP often begins with the use of NSAIDs and mild nonopioid analgesics, while more potent opioid analgesics are reserved for pain of moderate-to-severe intensity.13

Nonopioid Analgesics: NSAIDs are well known for their analgesic, anti-inflammatory, and antipyretic properties. Nonselective NSAIDs (e.g., aspirin, ibuprofen) inhibit the COX-1 and COX-2 enzymes as well as prostaglandin synthesis. Selective NSAIDs (e.g., celecoxib) specifically inhibit COX-2 and the production of vascular prostacyclin (PGI2), which prevents platelet aggregation and causes vasodilation. Unlike the nonselective NSAIDs, selective COX-2 inhibitors do not reduce the production of endogenous thromboxane A2 (TXA2 ), a potent platelet activator and aggregator. Due to the inhibition of PGI 2 without inhibition of TXA2, the use of COX-2 inhibitors can potentially lead to an increased risk of cardiovascular events.14

Gastrointestinal (GI) adverse effects such as abdominal pain, nausea, vomiting, constipation, and indigestion are commonly associated with the use of nonselective NSAIDs. In addition, gastric or duodenal ulcers, bleeding, or perforations may sometimes occur with chronic or long-term use. The use of a proton pump inhibitor or misoprostol, a synthetic prostaglandin analog, in patients with chronic NSAID use has been demonstrated to be protective against gastric and duodenal ulcers. 15 The use of COX-2 inhibitors is sometimes preferred due to their safety profile compared to the nonselective NSAIDs. However, both selective and nonselective NSAIDs may also cause renal insufficiency or liver damage, especially in patients with predisposing risk factors.13,16 Although there is strong evidence demonstrating the efficacy of NSAIDs in acute LBP, their use in CLBP is only supported by moderate evidence.17

Acetaminophen is a reasonable first-line option for the management of CLBP due to its tolerable side-effect profile and inexpensive cost.17 It is proposed to promote analgesia by inhibiting COX-3, which is an isoform found only in the central nervous system (CNS).13 Unlike NSAIDs, acetaminophen causes minimal GI adverse effects and is rarely associated with renal toxicity. However, patients should be cautioned against exceeding 4 g/day due to the increased risk of developing hepatotoxicity.18 Exceeding the recommended daily dose may also result in hepatic necrosis, especially when acetaminophen is consumed along with alcohol.13

Opioid Analgesics: Opioid analgesics were developed to mimic the actions of dynorphins and enkephalins in response to pain. These agents activate opioid receptors within the peripheral and central nervous systems, resulting in analgesia. Immediate-release opioid analgesics (e.g., morphine) are useful in the setting of acute pain; however, because of their extended duration of action, controlled-released preparations are used more frequently for the management of chronic pain. The use of opioid analgesics is associated with adverse effects that include sedation, euphoria, hallucinations, constipation, pruritus, and nausea or vomiting. Additionally, their use over time increases the risk of tolerance, physical dependence, and addiction.19

Tramadol acts as a weak agonist at mu receptors and inhibits the reuptake of serotonin and norepinephrine, resulting in the suppression of pain signals within the CNS. Tramadol is available as immediate- and extended-release preparations (Ultram and Ultram ER, respectively) and is also formulated in combination with acetaminophen (Ultracet). Tramadol was found to be more effective than placebo for short-term pain relief and improvement in functional status in patients with CLBP.21 Other trials evaluating tramadol in this population are difficult to interpret because they included the use of analgesics that are unavailable in the U.S.19 Furthermore, tramadol has not been directly compared to opioid analgesics or NSAIDs. Tramadol can lower the seizure threshold and increase the risk of serotonin syndrome, particularly when used in combination with serotonergic antidepressants. Therefore, its use should be avoided in patients with seizure disorders and in those taking antidepressants with serotonergic activity.

Adjuvant Analgesics: Antidepressants have been commonly used for the treatment of neuropathic pain. Tricyclic antidepressants (TCAs) such as amitriptyline have demonstrated efficacy in reducing pain associated with neuropathies, including CLBP.22 Since depression is often linked to chronic pain, the use of a TCA as adjunctive therapy may provide pain relief and improve depressive symptoms. The short-term use of TCAs is associated with an increased incidence of anticholinergic effects when compared to placebo. Therefore, TCA use should be avoided in the elderly and in those with benign prostatic hyperplasia or cardiac abnormalities. Selective serotonin reuptake inhibitors (SSRIs) have not been proven to be beneficial for CLBP, and data from trials evaluating the use of serotonin norepinephrine reuptake inhibitors (SNRIs) in this population are not yet available.23

Anticonvulsants commonly used in the management of chronic neuropathic pain include gabapentin, pregab­ alin, and topiramate. Muehlbacher et al demonstrated that the use of topiramate at doses up to 300 mg/day after 10 weeks was more effective than placebo for reducing pain intensity and improving functional status.24 Gabapentin titrated to its maximum dose of 3,600 mg/day demonstrated only a small benefit over placebo in the short-term management of LBP.25 Studies involving the use of systemic corticosteroids have not demonstrated efficacy in CLBP and therefore are not recommended. Small trials evaluating the use of nonsurgical interventional treatment with periodic corticosteroid injections have demonstrated beneficial effects for up to three weeks when compared to placebo.26

Summary
Pharmacists can continue to play a critical role in the management of CLBP due to their accessibility and frequent contact with patients in the community. With proper education, patients with CLBP can manage their pain more effectively in an effort to decrease the significant societal burden resulting in costly medical bills and lost productivity. Increased awareness of current guidelines for pharmacologic as well as nonpharmacologic therapy will help to provide effective management of CLBP. In addition, the implementation of pharmacist-directed pain clinics may provide more effective patient care through regular monitoring and titration of analgesics in an effort to help patients meet reasonable pain-specific goals.27 Future considerations for the management of CLBP include the evaluation of combination pharmacologic agents as well as additional research to assess decision tools or methods for tailoring therapy.

3. National Center for Health Statistics. Health, United States 2005, with chartbook on trends in the health of Americans. www.cdc.gov/nchs/data/hus/hus07.pdf#contents. Accessed February 26, 2008.