Data from the Centers for Disease Control and Prevention/National Center for Health Statistics show that the 1.1 billion visits made to physicians' offices, hospital outpatient departments (OPDs), and hospital emergency departments (EDs) constitute a 26% increase from 1996 to 2006. This increase is much steeper than the rate of population growth, which was 11%. The increase in ambulatory visits is attributed to the aging of the American population and a resultant increase in drug utilization. Compared with white patients, black patients had more visits to hospital OPDs (16.8% vs. 8%) and EDs (21.1% vs. 9.2%) and fewer visits to office-based specialists (40.8% vs. 47.2%). The 29% increase in rate of visits to medical-specialty offices was due largely to the increased number of white patients. Nearly 50% of ambulatory-care visits were made to primary care physicians at their offices. Hypertension (28.1%), arthritis (17.5%), diabetes (11.9%), depression (10.4%), obesity (8.3%), and chronic obstructive pulmonary disease (4.9%) were the top six reasons for making ambulatory-care visits. 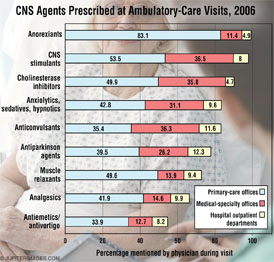 The percentage of visits during which medication was prescribed increased significantly across all ambulatory settings. In 2006, 72% of all ambulatory-care visits produced at least one medication mention by the physician, contributing to 2.6 billion mentions during all visits. Central nervous system agents were the most common therapeutic category (22.5 drugs per 100 mentions). Analgesics were mentioned most often (13.6 times per 100 drug mentions); nonsteroidal anti-inflammatory agents were a distant second, with 4.2 times per 100 mentions. Among anticonvulsants, physicians prescribed benzodiazepines, hydantoins, and dibenzazepines the most. With regard to antiemetic/antivertigo agents, physicians prescribed anticholinergics and phenothiazine most often. An equal number of mentions were made for dopaminergic agents and anticholinergic agents to treat parkinsonism. Benzodiazepines were the most frequently prescribed anxiolytic agent.

The increase in ambulatory care for neurologic disorders was significantly higher for patients 25 years and older versus younger patients. Across all ambulatory settings, visit rates did not differ between patients in these age catetories: 24 to 44, 45 to 64, 65 to 74, and 75 years and older. For neurologist visits, females had a higher rate per year compared with males (3.3 per 100 females vs. 2.5 per 100 males). Patients aged 25 to 44 accounted for 35.3% of all visits made to neurologists; patients older than 44 accounted for slightly less than half of visits (46.1%). Females accounted for a greater proportion of these visits than males (58% and 42%, respectively). White patients accounted for 91.1% of visits to neurologists, and black patients accounted for 7% of such visits.