Obesity is a medical condition that is highly resistant to therapeutic interventions.1 The simple explanation is an imbalance between energy intake and energy expenditure, but patients often resist reducing intake and increasing exercise in a manner sufficient to induce sustainable weight loss.2 As a result, overweight patients undergo numerous approaches with varying degrees of success, including expensive gadgets, portion control, meal plans, support groups, surgery, and pharmacotherapy. This year marked the debut of a new nonprescription product, orlistat (alli). Presently, no other nonprescription product is proven safe and effective for weight loss.

Obesity
The World Health Organization estimated that 1.6 billion adults (over age 15 years) were overweight in 2005.3 In the U.S., the overall incidence of obesity has doubled since 1980.4 Certain groups have fared even worse; the incidence tripled in children and teens. An estimated one-third of adults are considered overweight and another third are obese.5

Family income influences obesity. Women with lower income have a 50% higher risk of developing obesity than those with higher income.4 The reason is thought to be the preferential purchasing of high-fat, high-calories foods, which may be less expensive than healthy foods such as fruits and vegetables.4

Physician-Directed Options for Weight Loss
Companies have marketed numerous weight loss prescription medications; perhaps the most notorious are the amphetamines (e.g, Dexamyl, Eskatrol, Dexedrine, Didrex). For a variety of reasons, many weight loss medications have long been discarded. However, phentermine and sibutramine (Meridia) are still available. 7 In addition, patients who meet certain criteria may opt to undergo Lap-Band or gastric bypass surgery. These surgeries can yield consistent, large-scale weight loss.8

Orlistat
Orlistat debuted as Xenical 120-mg capsules in 1999.9 Its mechanism of action is inhibition of gastric and pancreatic lipases in the stomach lumen and small intestine.10,11 Triglycerides in the diet cannot be enzymatically degraded into absorbable, free fatty acids.5 As a result, the amount of fat absorbed is reduced by 30%.12,13 Orlistat was approved by the FDA for nonprescription sales as a 60-mg capsule on February 7, 2007. Company literature uses the trade names alli and Alli. The product gradually became available after FDA approval as the company developed its marketing plans. Xenical remains available.

Adverse Effects of Orlistat: Adverse effects due to orlistat are euphemistically referred to as treatment effects by the manufacturer.14 Those listed on the nonprescription label include gas with oily spotting, loose stools, and more frequent stools that may be hard to control. Collectively, all of these side effects can result in great discomfort and embarrassment. The Internet has several sites allowing orlistat users to exchange information about their experiences while taking it.15-17 The manufacturer instituted a message board that accomplishes the same objective. Users report that with orlistat use, they noticed a "strange orange ring left in the toilet bowl." 18 The pharmacist should peruse these sites to glean useful counseling tips for purchasers of orlistat.

Patients taking orlistat must commit to daily intake of a multivitamin containing beta-carotene and vitamins A, D, E, and K. As orlistat affects their absorption, failure to ingest them could lead to vitamin deficiencies, each with its well-known group of adverse effects.

Rare adverse effects of orlistat also appear in the medical literature. A 57-year-old female was prescribed orlistat 120 mg three times daily with meals; the dosage had been increased from a twice-daily regimen two months before the report.20 Her renal function had progressively worsened, and she reported general malaise, weakness, and loose oily stools several weeks prior to her hospital admission. Her urine contained numerous calcium oxalate crystals. Renal biopsy yielded a specimen that was examined with light micro­scopy. The investigators noted calcium oxalate crystals in the tubules and interstitium, hypothesizing that orlistat's effect on fat might have allowed the calcium to "soap out." 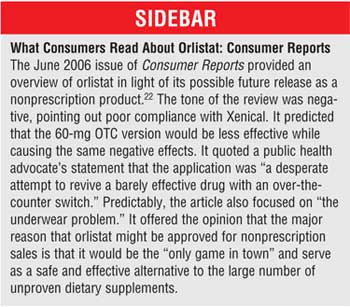 Orlistat Patient Materials: The Newsweek article also lauds GlaxoSmithKline for producing a variety of materials designed to allow patients to use orlistat without experiencing problems. The manufacturer sells a "Starter Pack" with comprehensive aids, but the pharmacist will not be able to read them unless one of the expensive packages is opened, after which it cannot be sold. For this reason, this article summarizes the various components.
a. "Hi." This booklet is a welcome guide that serves several purposes. It provides the unique code number the patient will need to register online for the myalliplan benefits. It also lists the various components of the Starter Pack and provides an overview of orlistat.
b. "Read Me First." This booklet urges patients to register for help at myalli.com. It also offers several basic points, such as expecting a steady and gradual weight loss, making a change in one's behavior, eating right, writing one's intake down, developing a routine, increasing the activity level, and sticking to the program. In several places, the handout stresses the importance of reducing fat intake (e.g., by cutting out all fried foods).
c. Quick Facts Cards . This is a set of four plastic, pocket-sized reminder cards with keys to success while on the program, such as tips on cooking, shopping, portion control, and snacking. They also give tips on limiting fat, foods to avoid, and best choices for nutrition.
d. Companion Guide . The patient should be instructed to peruse this booklet thoroughly before starting orlistat. In less than 60 small pages, it is a valuable discussion of the orlistat program, including appropriate expectations, patient commitments, adverse effects, the mechanism of orlistat, a body mass index calculation table, how to eat right, development of a support network, increasing one's activity level, and facing trouble spots.
e. Healthy Eating Guide. This booklet is a comprehensive guide to eating in a healthy, low-fat manner. It includes orlistat meal plans and provides the best choices for a variety of international foods and fast-food restaurants (e.g., Wendy's, Subway).
f. Calorie and Fat Counter. The orlistat user is urged to limit fat intake to minimize treatment effects. This booklet allows the patient to calculate precisely how many fat grams are in each meal.
g. Daily Journal . The manufacturer explains that the most valuable predictor of weight loss success is simply keeping an accurate record of food and drink intake. To that end, the final written component of the starter kit is a 14-page set of blank pages allowing the patient to record the item consumed, the amount, the calories it contains, and the fat grams.

Pharmacist's Role
The pharmacist is once again positioned to dispel many misconceptions about orlistat. As in the Newsweek article cited above, the major focus of news stories and consumer conversation is the possibility of orange, oily fecal leakage. This may be partly due to the fact that there has seldom been a widely used nonprescription product with this degree of potential embarrassment with its usage. Consumer sites also describe the major effectiveness of orlistat as being in fear of the major adverse effect. In the words of one correspondent: "The end result is that eating fat is unpleasant so you will reduce your intake while on the drug. The drug is a type of behavior modification..." 21

Some pharmacists have derisively referred to orlistat as "gastric Antabuse" or "fried food punishment." While this graphically describes the effect of orlistat, pharmacists can provide a more balanced explanation of orlistat for prospective users. They can justifiably point out that orlistat was never meant to be a weight loss miracle in and of itself. As fully explained by the manufacturer, orlistat is an aid to weight loss in patients who are already committed to becoming thinner. Such a patient will demonstrate that commitment by voluntarily following a low-fat diet and exercising more, even prior to beginning therapy with orlistat.

Pharmacists should urge purchasers to visit myalli.com. The Web site offers an individually tailored action plan (myalliplan) to help patients achieve healthy weight loss. Patients register for the plan using the individual number found inside the Starter Pack, entering their goal weight and other details about their diet plan. The company sends information about eating correctly and provides instructions on how to check in to record progress each week. It gives immediate feedback. The other features of the Web site are too numerous to mention, but all aim toward the goal of healthy weight loss using this nonprescription product. 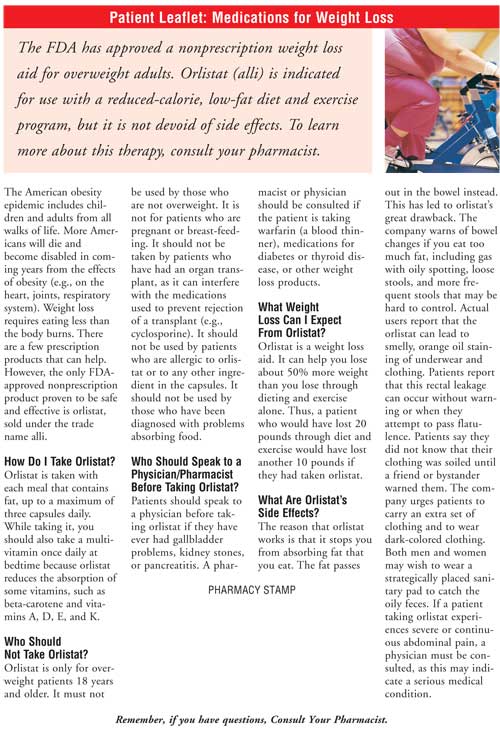 4. Who is at risk for overweight and obesity? National Heart Lung and Blood Institute. Available at: www.nhlbi.nih/gov/health/dci/Diseases/obe/obe_whoisatrisk.html. Accessed August 30, 2007.

6. What are the health risks of overweight and obesity? National Heart Lung and Blood Institute. Available at: www.nhlbi.nih.gov/health/dci/Diseases/obe/obe_risks.html. Accessed August 30, 2007.