Between 1975 and 2004 the number of new cases of melanoma rose, and it is estimated that 60,000 new cases occurred in 2007. Each year, more than a million people are diagnosed with basal-cell or squamous-cell skin cancer (nonmelanoma). Forty percent to 50% of Americans who live to the age of 65 will develop one of these two types of skin cancer at least once, but most cases of skin cancer are preventable.

The 2007 update of the National Cancer Institute's Cancer Trends Progress Report used the following criteria to assess sun-protection behaviors practiced by adults aged 18 and older when they are outside for more than one hour on a warm, sunny day: using sunscreen, wearing protective clothing, and seeking shade. Some types of protective clothing are sun visors, long-sleeved shirts, and sun-protective hats (not baseball caps) that fully protect the face, neck, and ears. 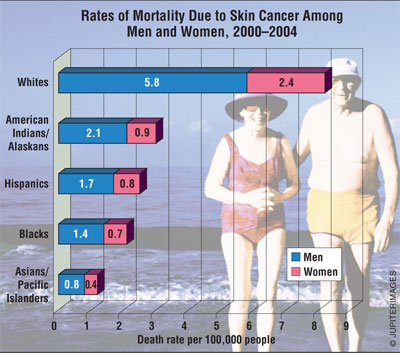 Protective Clothing: The percentage of people who usually or always use at least one sun-protective article of clothing declined between 2003 and 2005, more so among men.

Sunscreen: The percentage of people who usually use sunscreen increased somewhat after 1992 and remained stable from 1998 to 2000. The percentage increased between 2000 and 2003, including among people who used sunscreen with a sun-protection factor (SPF) of 15 or greater. Sunscreen use dropped more steeply between 2003 and 2005 compared with any of the earlier increases.

2005 Statistics
• 30% of individuals reported that they usually apply sunscreen; 27% usually use sunscreen with an SPF of 15 or greater.

• 58% of individuals aged 25 years or older reported using at least one method.

• 47% of men aged 18 and older reported usually using at least one method of sun protection, compared with 65% of women of the same age.

Groups at Risk for Too Much Sun Exposure
Men and younger adults are less likely to use some type of sun protection. Adults with less education and with a lower income are not as likely to use sunscreen. Currently, only 56% of adults protect themselves from sun exposure. The Healthy People 2010 target is to increase the percentage of adults who are very likely to use sunscreen with an SPF of 15 or greater, wear protective clothing, or seek shade to 75%.