The pharmacist is often asked about dermatologic conditions. Few are potentially life-threatening. Dermatologic problems range from trivial (e.g., mosquito bites, solar lentigines) to those that cause major discomfort (e.g., poison ivy, plantar warts, tinea pedis). One of the more common dermatologic complaints is contact dermatitis, which can exhibit various combinations of scaling, vesiculation, fissuring, and weeping, and can be found on any area of the epidermis, as well as in areas with little or no stratum corneum (e.g., the lips).

Classifications of Contact Dermatitis
Contact dermatitis is classified by numerous schemata, such as causative agent, type of lesion, and duration (acute vs. chronic). To help pharmacists advise patients about possible causes and future avoidance, contact dermatitis can be classified as irritant or allergic in origin.1 Irritant contact dermatitis is tissue damage induced by nonimmunologic causes. In other words, the same damage would occur in any individual, since allergic hypersensitivity is not a factor. The irritant agents responsible encompass a variety of plants, chemicals, and substances. Patients with irritant contact dermatitis may have a history of working with insulation, a material that deposits irritant spicules in the skin. Their job may involve prolonged exposure of their hands to moisture, which can macerate the skin, predisposing it to irritant contact dermatitis. Patients may work with chemicals such as cleaning solutions, solvents, cosmetics, home repair materials, and acids and alkalis. They may garden, picking plants such as okra pods without gloves, allowing sharp spines to enter the skin. The patient could be a baby with diaper rash or an adult with incontinence dermatitis.2 When pharmacists counsel patients with dermatitis, it is helpful to describe potential irritants so the patient can identify them and avoid future episodes.

Poison Ivy Dermatitis
Prevalence: Poison ivy is an appropriate focus of dermatitis for several reasons. It serves as a useful model of dermatitis in all respects (e.g., manifestations, avoidance). Furthermore, poison ivy causes more cases of allergic contact dermatitis than all other allergens added together. Thus, it is the dermatitis most likely to be encountered by pharmacists, and lessons regarding its treatment may be extrapolated to nonurushiol-induced contact dermatitis.

Poison ivy is the common name for the causative plant, but it is also the lay term for the contact dermatitis that arises from plant contact. The plant itself was once classified in the genus Rhus but has more properly been placed in the Toxicodendron genus. Poison ivy and its relatives (poison oak, poison sumac) produce a chemical, urushiol, to which 50% to 70% of the population can be sensitized. 2 While some individuals require exposure to large amounts of urushiols to have a reaction, millions of others react violently to minute amounts.

Patients allergic to poison ivy may also discover that they develop an allergy to mangoes.4-6 The fruit has become increasingly available in U.S. grocery stores. Peeling and eating the fruit allows the allergens to come in contact with the hands. 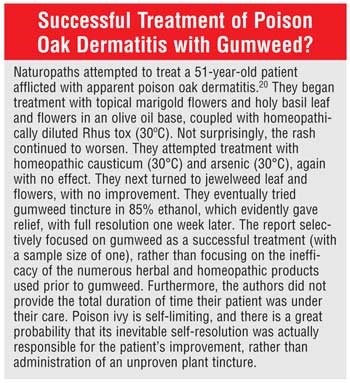 Prescription Treatment: Standard prescription therapy for poison ivy is administration of prednisone in a tapering dosage over two to three weeks.1,7 Shorter "dose-paks" (e.g., methylprednisolone) can be frustrating for the patient, since poison ivy often lasts longer than the tablets. As the tapering regimen of these shorter dose-paks reaches completion, urticaria may reappear with a return of the accompanying severe pruritus.

FDA-Approved Nonprescription Treatment: The FDA, in its sweeping review of nonprescription ingredients, examined numerous options for treatment of dermatitis.8 Among them are the protectants, astringents, antihistamines, and local anesthetics/analgesics. They often provide little relief of severe poison ivy, and the patient might be well-advised to visit a physician if the condition is still severe after a day or two. Protectants such as zinc acetate, zinc carbonate, zinc oxide, and calamine dry the oozing and weeping of poison ivy, poison oak, and poison sumac. Protectants such as baking soda or colloidal oatmeal relieve minor irritation and itching. Aluminum acetate is an astringent that relieves rash.

The pharmacist must take care in recommending diphenhydramine (e.g., Benadryl) for poison ivy or other dermatitis conditions. The FDA has proposed a label advising against use of topical diphenhydramine on poison ivy, chicken pox, sunburn, or large areas of the body, or to broken, blistered, or oozing skin. This precaution is intended to prevent the development of toxic psychosis, with dilated pupils, flushed face, hallucinations, ataxic gait, and urinary retention. The psychosis has been seen in patients ages 19 months to 9 years.

Unproven Nonprescription Options: Poison ivy sufferers have a host of products of unknown safety and efficacy from which to choose. For many years, folk wisdom has held that one may gain immunity to poison ivy by eating the leaves of the plant, a practice that is foolish and extremely hazardous. Nevertheless, compounding pharmacies advertise the availability of an oral poison ivy solution developed from a German formulation, described as "Rhus Tox Oral Solution."9-11 The Web sites state that it is prepared from the resin of the rhus plant, apparently from urushiol itself. Patients purchasing this product are directed to hold it in the mouth for 30 seconds before swallowing it, repeating this procedure on the same day of the week for three weeks. The Web sites promise that it will prevent poison ivy, as though the patient were undergoing legitimate hyposensitization therapy directed by a physician. Web sites promoting the use of oral "Rhus Tox" are strangely silent on its exact composition, but the product may be identical or at least closely related to an oral rhus tox solution described in the International Journal of Pharmacy Compounding in 2003.12 This publication described treating patients with a 0.0001% rhus tox solution, prepared from a "mother tincture" provided by a homeopathic manufacturer. The study in the IJPC article apparently lacked a control group, did not employ randomization, was nonblinded, and did not include administration of placebo. The sample was only 73 patients. Inferential statistical tests were not used, so the reader cannot generalize to the entire population of urushiol-sensitive individuals.

One company markets homeopathic poison ivy/oak tablets containing Rhus Toxicodendron 6X, Croton Tiglium 6X, and Xerophyllum 6X.13 The Web site claims that the ingredients provide relief for red, swollen eruptions and for intense itching, stinging, and burning inflammations. The Web site also claims, "Our tablets do not expire."14 Croton tiglium has been a suspected carcinogen since the 1960s, and Croton and xerophyllum are both unsupported by evidence-based medicine for use as poison ivy remedies in highly diluted homeopathic products.

A full search of the FDA Web sites and publications in the Federal Register reveals that there is no acceptable evidence to demonstrate either safety or efficacy in administration of oral urushiols to prevent poison ivy dermatitis. Pharmacists who compound and/or sell this unproven therapy do their patients a great disservice. Patients who undergo the regimen may hike among poison ivy plants and discover firsthand that the product is inefficacious. Even more alarming, there are reports of patients ingesting rhus who developed systemic contact dermatitis, with symptoms such as maculopapular eruption, erythema multiforme, erythroderma, pustules, purpura, weals, and blisters.15,16 One such patient had ingested a homeopathic preparation and also applied an alcoholic extract topically.17

There is also interest in a proprietary product known as Zanfel Poison Ivy Wash. The company Web site states that this product is unique, being the only one able to remove urushiol from the skin "after bonding," through the formation of "an aggregated cluster."18 The Web site also claims the product relieves pain and itching, usually within 30 seconds. A thorough search of the manufacturer's Web site yields locations to buy the product, furnishes glowing testimonials from satisfied users, and answers several questions about it, but the ingredients contained in the product do not appear on any Web page. Knowledge of the ingredients is critical in ascertaining their efficacy and safety. A Web site selling the product lists them as polyethylene granules, sodium lauroyl sarcosinate, nonoxynol 9, C12-15 Pareth-9, disodium EDTA, quaternium 15, carbomer 2%, triethanolamine, and water.19 None of these ingredients is FDA approved to remove urushiols, and none possesses any proven local anesthetic effect that would relieve itching and pain. Since the product does not yet meet the standards of evidence-based medicine, it is unproven and should not be recommended. 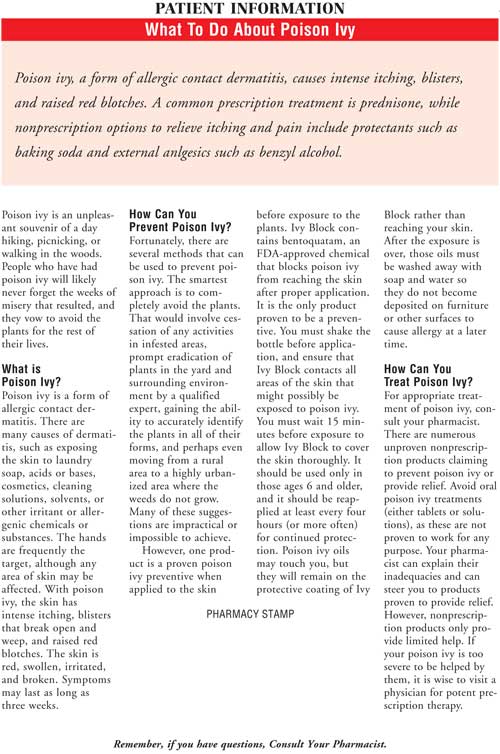