While the birth of a child is exciting and monumental, many women experience short- or long-term mood disturbances in the postpartum period.1,2 Symptoms of tearfulness, anxiety, and irritability in the days after delivery are common and generally are mild and self-resolving.2 However, some women develop a more serious form of depression postpartum that can last for several months and interfere with a woman's ability to take care of herself and her newborn.3 Because of this, it is important for health care providers who care for women during and after pregnancy to have an increased awareness of the symptoms of postpartum depression (PPD) in order to identify the problem early and treat the disorder appropriately.

POSTPARTUM BLUES
Up to 80% of women develop postpartum blues within a few days of delivery and experience symptoms including mood swings, anxiety, irritability, insomnia, lack of concentration, and crying spells.4,5 Postpartum blues begin two to three days postpartum, peak at around day 5, and resolve within two weeks of onset.5 Since the condition is short-lived, symptoms often resolve before a woman chooses to seek medical intervention.3,5 If the symptoms of postpartum blues worsen or persist for more than two weeks, a woman should notify her physician immediately to be screened for PPD.3,6

Although the etiology of postpartum blues is unknown, the hormonal changes of childbirth are a likely cause.7,8 Other risk factors for developing postpartum blues are history or family history of depression, depressive symptoms during pregnancy, mood changes associated with premenstrual syndrome or oral contraception, stress over child care, and psychosocial impairment.6

Because the disorder is mild and resolves quickly, medical treatment usually is not required.3 Instead, treatment is focused primarily on providing support for the mother, her baby, and her family. It also is important for the mother to have adequate time for sleep and rest; for example, others should be allowed to care for the baby at night, if necessary.3,6,7

POSTPARTUM DEPRESSION
PPD, which affects 10% to 15% of childbearing women, may begin anywhere from 24 hours to one year after delivery.9,10 PPD is often underdiagnosed because many of its symptoms resemble the discomforts women commonly experience during the postpartum period (e.g., insomnia, fatigue, decreased libido).11,12 Because of this, a woman may not recognize some of these symptoms as being abnormal and therefore may not contact her physician. One study reported that two-thirds of women diagnosed with PPD did not think they had the disorder and that only 20% had reported their symptoms to a health care provider.6,13

Etiology
The exact etiology of PPD is unknown. Although many biological and physiologic theories exist (e.g., hormonal excesses or deficiencies), there is little evidence to support them.14,15 Other epidemiologic studies have supported the idea that psychosocial factors play a significant role in the etiology of PPD.15 Therefore, women with a history of depression, premenstrual mood disorders, marital conflict, poor social relationships, and stressful life events are at greater risk for developing PPD.12,14,16

Diagnosis
Some of the most common symptoms of PPD are depressed mood, sleep disturbances, weight loss, anxiety or irritability, loss of energy, lack of concentration, feelings of worthlessness or guilt, and thoughts of suicide or death.3,6,10 Because of the close symptomatic similarities between PPD and major depression, the Diagnostic and Statistical Manual of Mental Disorders (DSM-IV) does not classify PPD as a separate diagnosis.17 Instead, a "postpartum-onset specifier" is used to describe mood disorders that occur within four weeks of delivery.10,17 The DSM-IV uses the same criteria for diagnosing major depression as it does for PPD.6,17

It is important for health care providers to distinguish between the signs of PPD and the normal mood fluctuations women experience postpartum when making a definitive diagnosis of PPD.11,12 For example, it is normal for a woman to be exhausted and irritable when her newborn nurses every few hours and awakens multiple times throughout the night; a woman experiencing these symptoms when the baby is five months old and sleeping through the night should be evaluated for PPD.10

Screening all women for the signs and symptoms of depression in the postpartum period is the most effective way to identify and treat the disorder before it progresses. Providers should screen for PPD at a woman's first postpartum follow-up visit and again at six weeks.6 The Edinburgh Postnatal Depression Scale (EPDS) is a 10-item questionnaire designed to identify PPD; with 100% sensitivity and 95% specificity in multiple studies, this tool is utilized by physicians worldwide.10,18,19 Data on the success of the EPDS are limited. Other screening tools are the Postpartum Depression Screening Scale and the Beck Depression Inventory.20

Treatment
While optimal treatment strategies are still being researched, effective management of PPD includes both nonpharmacologic and pharmacologic interventions.10,21 Women with mild-to-moderate symptoms of  PPD should try nonpharmacologic treatments, such as psychosocial therapy.6 In addition to being effective, these mechanisms are desirable for women who want help but wish to avoid using medications while they are breast-feeding.3 Interpersonal therapy (IPT), a type of psychotherapy, focuses on a woman's relationships and the role transitions that occur after the birth of a child.22 A study conducted in 2000 found that 12 weeks of IPT were more effective than no treatment at improving social adjustment and decreasing PPD symptoms.23 Cognitive-behavioral therapy helps a woman identify negative thoughts, beliefs, and behaviors that are inaccurate or dysfunctional and learn to replace them with more positive, realistic thought processes.24,25 Other nonpharmacologic treatments for PPD are group therapy, nondirective counseling, light therapy, partner-support counseling, and peer support groups.6,10,25

Pharmacologic intervention is warranted when a woman's PPD symptoms become moderate-to-severe or when the woman does not respond to nonpharmacologic therapy alone.3

Antidepressants: Although benzodiazepines are a useful adjunct for the anxiety and agitation associated with PPD, antidepressants are recommended to treat the core symptoms of the disorder.3,10 While there are many studies reporting the effectiveness of antidepressants for treating depression, almost no data (i.e., randomized, placebo-controlled trials) exist as to the efficacy of these medications for the treatment of PPD specifically.26,27 Because of this, antidepressants are often used for PPD based on study results for depression in the general population.6

Due to their effectiveness, low incidence of side effects, safety in the event of overdose, and once-daily dosage formulations, selective serotonin reuptake inhibitors (SSRIs) are considered first-line agents for the treatment of PPD.3,16,28 Although the side-effect profile and overdose severity of the tricyclic antidepressants (TCAs) are greater than those of the SSRIs, TCAs have been shown to improve the symptoms of PPD also.10,29,30 One double-blind trial of nortriptyline (a TCA) and sertraline (an SSRI) found that 109 women divided between the two drugs had the same response and remission rate for PPD at four, eight, and 24 weeks.29-31 SSRIs and TCAs are used most often, but other antidepressants are available to treat PPD (e.g., serotonin norepinephrine reuptake inhibitors, dopamine reuptake inhibitors). Doses, side effects, and breast-feeding recommendations for the most frequently prescribed antidepressant agents are summarized in TABLE 1.3,10,32-34 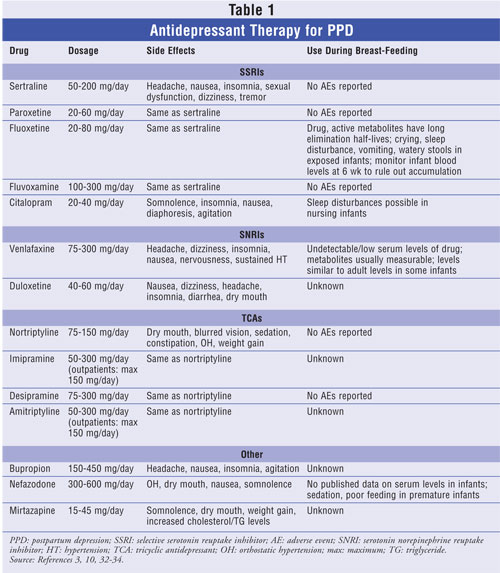 Most women show signs of improvement within two to six weeks of medication initiation.6,10 If  no  improvement is noted or symptoms worsen after two weeks, the physician should consider increasing the dosage or switching to a different agent.10,31 Antidepressant treatment should continue for nine to 12 months to achieve full remission and minimize the chance of relapse.6,10,31

A major factor to consider in deciding whether to treat PPD with antidepressants is whether the patient is breast-feeding. It is necessary to inform patients that all antidepressants are excreted into breast milk and that studies have found detectable drug concentrations in the plasma of some breast-fed infants.10,35-38 It is important to note, however, that these infants were found to tolerate exposure without harm and that instances of toxicity were extremely rare.3,36,39,40 While data on the adverse effects of antidepressants in infants during breast-feeding are limited, several studies have concluded that the SSRIs sertraline, paroxetine, and fluvoxamine have the least transmission to infants through breast milk.24,40,41 The seventh edition of Briggs's Drugs in Pregnancy and Lactation describes 14 different reports on the use of these three agents during lactation, and none reported adverse effects on the infants.33 Physicians should discuss with their patients the risks and benefits of antidepressant use while breast-feeding and help them decide which course of therapy is most appropriate for them to ensure a successful recovery. See TABLE 1 for recommendations concerning the use of various antidepressants during breast-feeding.33,34

Other Pharmacologic Agents: Antidepressants remain the standard for the treatment of moderate-to-severe PPD. However, although supportive data are limited, hormonal therapy, omega-3 fatty acids, and anxiolytics also have been used as alternatives for treating PPD.3,6,10,25

ROLE OF THE PHARMACIST
PPD is often underreported because many women dismiss their symptoms as a normal result of childbirth. It is imperative for physicians to proactively screen women for PPD soon after delivery to identify depressive symptoms and initiate treatment before the disorder progresses. Pharmacists also can play an active role by making sure that at-risk women who approach them receive appropriate help. Whether by recognizing symptoms that may warrant referral to their physician, providing valuable drug information to a woman starting a new medication for PPD (i.e., when to expect relief, potential side effects), or offering assurance and support, pharmacists can contribute significantly to the early detection and treatment of this common and curable disorder.