Human hair carries many connotations. A full head of hair is characteristic of youthful males, so those favored with an abundance of hair are assumed to have the qualities of that group, such as energy, athletic prowess, and being at the peak of one's sexual potential.1 By contrast, hair loss is usually considered to be characteristic of older males, and it carries such unwarranted implications as lack of vigor, sexual impotence, general loss of capable functioning, and medical illnesses. Males suffering from appreciable hair loss report feelings of lowered self-worth, loss of confidence, and a feeling of being older than a set of age-matched counterparts without hair loss.2

Phases of Hair Growth
The healthy human head contains an average of 100,000 hairs in different stages of the follicular life cycle.3 As many as 85% are in anagen, a long-lasting (2-7 year) metabolically active growth phase. Following anagen, a hair enters a short phase known as catagen for one to three weeks, during which the follicle shrinks and the lower section of hair is destroyed. This is followed by a final five- to six-week phase known as telogen, during which the hair is usually lost. At the end of this phase, a new hair begins to grow in the follicle.

Causes of Hair Loss
There are many reasons for hair loss. They are often subdivided into scarring (cicatricial) or nonscarring alopecias.3 Generally, alopecias that scar the scalp produce permanent damage. By contrast, hair can usually regrow when alopecias are a result of nonscarring processes. There are exceptions to this general rule, but it serves as a useful guide in many situations.

Permanent hair loss due to scarring alopecias can result from chronic cutaneous lupus erythematosus, lichen planopilaris, classic pseudo­ pelade of Brocq, central centrifugal cicatricial alopecia, alopecia mucinosa, keratosis follicularis spinulosa decalvans, and other disorders.3,4 None of these can be self-treated.

Hair loss can also indicate the presence of a sexually transmitted disease. Syphilis cases are increasing, and the secondary form of the condition can cause a moth-eaten appearance, with patches of loss, a generalized loss, or both.5 HIV also commonly causes hair loss. The most frequent feature of HIV-associated loss is straightening of the hair, but the texture may also change to a finer consistency and the hair may break more readily.5

Manifestations of Androgenic Alopecia
It is critical for the pharmacist to be able to recognize androgenic alopecia and to refer patients suffering from any other type of hair loss to a dermatologist or other physician for appropriate diagnosis and treatment.

Androgenic alopecia can be recognized in most cases by its appearance. Classic androgenic alopecia is also known as male pattern baldness, a gradual thinning of the hair that moves symmetrically from the frontal and parietal areas.6,7 The central vertex is usually the last to be affected, leading to the classic "M" of male pattern baldness. Patients often also lose hair at the crown of the head. However, over time the vertex hair thins out appreciably and the balding spot at the crown merges with the central vertex, leaving hair only around the ears and neck. Even this hair is thinner, with a slowing of its growth.

Patients approach the pharmacist for assistance at all stages of this scenario. Unfortunately, nonprescription products work best at the earliest stages, and often fail completely when the patient has already experienced advanced androgenic alopecia.

Prevalence of Androgenic Alopecia
Androgenic alopecia is the most common cause of hair loss in males.6 The overall incidence in Caucasian men may be as high as 96% or more, but the exact prevalence is unknown.2 Estimates should include the ages for which the estimate has been generated and the degree of hair loss. Caucasian men aged 20 to 40 years have bitemporal recession in 62% of cases. In men aged 18 to 49 years, the incidence of hair loss measured as type III or greater on the well-accepted Hamilton-Norwood hair loss rating scale is estimated to be at least 42%. Within the ages 40 to 49 years, however, 53% are estimated to have moderate-to-extensive hair loss.2

Etiology of Androgenic Alopecia
The proposed dual etiologies of androgenic alopecia are found in its name. In order for the condition to manifest, it was thought for years that the patient must be genetically predisposed. In this theory, it was thought that the condition only manifests in these patients under androgenic stimulation. A recent trend is emerging where androgenic stimulation is thought to produce hair loss independent of the patient's genetic predisposition.6

The prepubertal male's body is virtually covered with tiny vellus hairs (except for glabrous skin such as the lips, palms, and soles).1 The hairs are fine and not noticeable in most areas. At puberty, the male experiences a surge of androgens, such as testosterone. Testosterone undergoes intracellular metabolism through the influence of 5-alpha reductase to become 5-alpha-dihydrotestosterone, which is of greater potency than the parent compound.1 Under its influence, the male's body develops long terminal hairs that are deeply pigmented. The normally developing male notices these changes on the legs, arms, underarms, chest, back, pubic area, and face. However, in the genetically predisposed individual, 5-alpha-dihydrotestosterone exerts a paradoxical effect on the scalp. In specific regions of the scalp, it causes follicles to undergo a reverse reaction. Rather than moving from vellus to terminal hair, terminal hairs revert to tiny vellus-like hairs that are difficult to see.

Treatment of Hair Loss
The only FDA-approved treatments for hair loss are the prescription product finasteride (Propecia) and nonprescription minoxidil (Rogaine).8 Nonprescription minoxidil is only indicated for androgenic alopecia. The packaging includes illustrations to clearly instruct the potential user on the typical look of the condition, advises use only on the crown of the scalp, and cautions against use if the amount of hair loss is different from that shown on the package or is on the frontal scalp (i.e., receding hairline).9-11 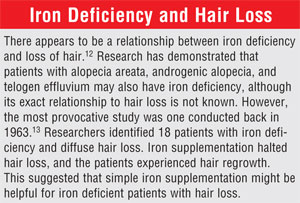 Instructions for Use of Minoxidil
All minoxidil products are flammable and must not be used around fire or flame.9-11 The products instruct against use when hair loss is sudden and/or patchy, if the patient has no family history of hair loss, does not know the reason for hair loss, is less than 18 years of age, has a scalp that is abnormal (red, inflamed, infected, or painful), or uses other medications on the scalp. Patients are cautioned not to apply the product to any other area of the body and to avoid contact with the eyes. They should ask a physician before use if they have heart disease. They should stop use and speak to a physician if they experience chest pain, tachycardia, faintness, or dizziness, if they have sudden unexplained weight gain, if the hands or feet swell, if the scalp becomes red or irritated, if they notice unwanted growth of facial hair, or if there is not hair regrowth in four months.

The pharmacist should stress to potential minoxidil users that the product is useless if it remains on the hair, and that it must contact the scalp itself to begin to exert any activity.8 Patients are directed to apply 1 mL of the product using the enclosed dropper (or one-half capful if using the foam product) twice daily, directly onto the crown in the area where hair has been lost.9-11 They should use the fingers to massage the solution or foam into the scalp and wash the hands after doing so. They must understand that it will not be effective in all patients, and that hair color and/or texture may change. Increasing the dose beyond that advised on the label to help the product's efficacy is dangerous. To be fully effective, the product should remain on the scalp for a full four hours, giving time for maximum absorption.8 Thus, patients should not go to bed (where the product can be rubbed off on the pillows), wear a cap or hat, take a shower or bath, walk in the rain, or engage in any other activity that would wash or remove it from the scalp before it dries.

Realistic Expectations
Patients should be advised that the product acts slowly, if at all. With the 2% solution, twice-daily usage for four months may be necessary before results are noticeable. For the 5% solution and foam, patients may see results in two months, but they may also need four months.

The manufacturer states that in trials that enrolled mostly Caucasian males aged 18 to 49 years with only moderate hair loss, after four months using the 2% solution, 26% reported moderate to dense regrowth (as compared to 11% using placebo), and 33% had minimal regrowth (as compared to 31% using placebo).10 Thus, in those trials, it appears that 41% of users experienced no growth, as opposed to 58% of those using placebo. In those same trials, the 5% solutions provoked greater response than the 2% product.9-11 However, the manufacturer also states that hair regrowth has not been proven to last beyond four years with continuous 5% treatment.9

Patients should also be informed that if minoxidil does provide noticeable increase in hair, it is necessary to continue to use the product for as long as the male wishes to keep the regrown hair. If the product is discontinued, the hair will no longer be stimulated to grow, and it will begin to slowly and gradually diminish.8 The hair loss will not be sudden or immediate, but the scalp will eventually return to its former state, usually within six months.8

If the patient has used minoxidil for any appreciable length of time, he may notice that the hair loss area is larger upon cessation of minoxidil than when he began. This is due to the fact the progress of androgenic alopecia is not suspended while minoxidil is being used. It may appear to be slowed or halted, but this is solely due to minoxidil's influence. Enlargement of the area of vertex baldness can mislead the male into blaming minoxidil, but the pharmacist can explain that the male's androgenic alopecia has simply progressed beyond where it was when the product use was initiated. 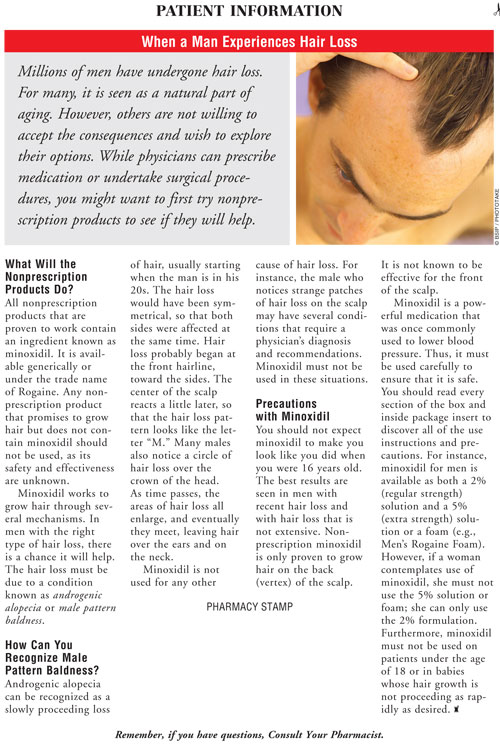