The CDC's 2006 National Health Interview Survey examined selected health measures in adult males. The nine diseases and conditions of greatest prevalence and their prevalence in Hispanic or Latino, African American, and white men are discussed. White men have the greatest prevalence of these health problems. 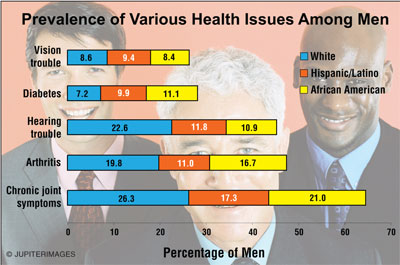 Lower-Back Pain: This is the most prevalent health problem (72.4%), affecting 27.3 million men. Of these, 27.4% are white, 24.1% are Hispanic, and 20.9% are African American. Men in poor or near-poor families are more likely to suffer from the problem. Those covered by Medicaid or Medicare are more likely to experience lower-back pain than those covered by private health insurance. Lower-back pain is less prevalent among men with at least a bachelor's degree than in those who did not graduate from high school.

Chronic Joint Symptoms: This health problem, affecting 25.2 million men, is ranked as the second most prevalent condition (64.6%). White men suffer from it the most (26.3%), followed by African American men (21.0%); Hispanic men suffer from it the least (17.3%). Chronic joint symptoms are more common among poor men, and they occur most commonly among men covered by Medicaid or Medicare.

Diabetes: Diabetes is the sixth most prevalent health problem among men, affecting 8.2 million (28.2%). African American men bear the greatest burden of the disease (11.1%). White men are less affected by diabetes (7.2%) than are Hispanic men (9.9%).

Migraines or Severe Headaches: Migraines and severe headaches are most common in African American men (10.5%), followed by 9.9% of white men and 8.8% of Hispanic men. This health problem affects 10.3 million men (29.2%).

Vision Trouble: About 8.8 million men (26.4%) are afflicted with vision problems. Hispanic men (9.4%) outnumber white men (8.6%) and African American men (8.4%) in prevalence. Vision trouble increases with advancing age, but a significant prevalence rate is observed at 75 years of age, when it jumps by 60%.

Absence of All Natural Teeth: About one-quarter (8.2 million) of the male population has lost all natural teeth, with the prevalence nearly the same (8.7% and 8.4%, respectively) among white men and African American men. Hispanic men have the lowest prevalence (6.0%) of absence of all natural teeth.