A 41-year-old man presents to a dermatology clinic with a three-day history of pruritic lesions. Two lesions are located on the upper medial bicep of the right arm (see FIGURE 1 for one of these lesions) and one is located on the upper medial region of the right thigh. Each lesion consists of a central vesicular area with a 2- to 3-cm red erythematous area. The patient does not recall being bitten by any insects. He reports significant pruritus with little pain; he has not experienced nausea, vomiting, diarrhea, or fever. The patient has no significant past medical history. 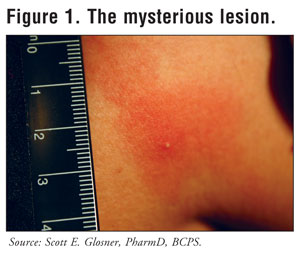 Unlocking the Mystery
During the summer of 2007, hundreds to thousands of Chicago-areaÜ residents went to emergency rooms and physicians' offices with itchy welts similar to those described in the case above.1,2 Residents of the western suburbs of Chicago, specifically, were dealing not only with the mysterious bites, but also with the return of swarms of cicadas after a 17-year hiatus. (Cicadas, sometimes confused with locusts, are large insects with big, wide-set eyes; they produce one of the loudest insect sounds known.3) According to an entomologist and mite expert from the Illinois Natural History Survey, Ed Zaborski, there was a connection between the bites and the return of the cicadas; it is his belief that the bites came from a microscopic itch mite called Pyemotes (pronounced "pie-uh- moat-eez") that is known to cause dermatitis in humans.1 These mites appear to have fed on cicada eggs.1 The Illinois Department of Public Health asked for Zaborski's help in identifying the organism.1

Similar outbreaks had been reported as far back as 1852, when an itch-mite outbreak associated with sacks of wheat occurred in France.4 More recently, outbreaks were reported in Kansas (2004) and Nebraska (2005) in which pin oak trees were the source of the itch mite known as Pyemotes herfsi.5 In the Kansas and Nebraska outbreaks, the mites fed on midge (a small, two-winged fly) larvae inside galls.6 Galls are irregular growths that appear on plant branches and leaves and commonly occur on pin oak trees ( FIGURE 2 ). Insects and mites manufacture growth-regulating chemicals that react with plant hormones and produce the galls. These galls provide the mites with nutrients and protection from pesticides and natural enemies.7 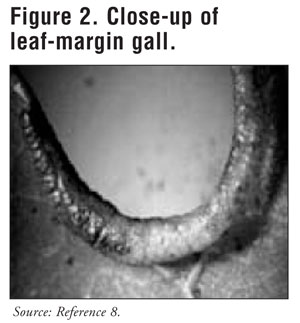 The two main Illinois counties that were affected by the bites had very few oak trees, affording limited information. Numerous cicada egg nests were found on the pin oak tree twigs collected by Dr. Zaborski, however.1 Cicadas can potentially lay hundreds of eggs per branch, and their nests of eggs provide needed protection for the mites. Weather associated with spring cold fronts or human or animal migration patterns may have carried the Pyemotes to Illinois from neighboring states, such as Kansas and Nebraska. The area of southeastern Illinois, Indiana, and Tennessee is expected to experience the emergence of the 17-year periodical cicadas in 2008; this may lead to another outbreak of the P herfsi mite.8

Background on Pyemotes
There are 20 different species of Pyemotes. The oak leaf itch mite ( P herfsi) is a European mite species closely related to Pyemotes tritici. 4 P tritici mites commonly breed in stored in, dried beans and peas, wheat straw, hay, and other dried grasses. Itch mites and straw mites have caused outbreaks in the past, as previously mentioned. Species of Pyemotes mites generally have similar life habits, as follows: The newly mated female injects a neurotoxin-containing saliva into her host, paralyzing the host and enabling the gravid female to feed on the host's hemolymph.9 Hundreds of adult mites emerge from the gravid female. Studies have estimated the number of mites dropping from large pin oaks in Nebraska to exceed 300,000 mites per tree per day.8 The mite has a mouth like a soda straw; it jabs this into whatever it's eating and sucks up cells through the straw. The chances of finding a mite on a bite are rare; P herfsi mites are 0.2 mm in length and barely visible to the naked eye, and the mite is gone long before the initial reaction occurs.9

The life cycles of the midge and the oak leaf itch mite are depicted in FIGURE 3. 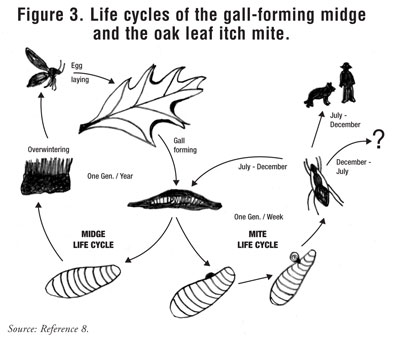 Epidemiology of Pyemotes Outbreaks
Environmental characteristics associated with a 2004 Pyemotes outbreak in Crawford County, Kansas, are given in TABLE 1.5 People living in urban areas were five times more likely to have been bitten, with a higher likelihood occurring in individuals under the age of 34. The prevalence of bites in this younger demographic is presumably due to greater exposure from clothing choices and increased outdoor activity. Bites were reported in humans and pets that rarely ventured outdoors, thus raising the possibility that the mites, aided by the wind, entered homes through open screen doors and windows.9 Residents with a pin oak tree in their housing lot were at almost four times greater risk for bites than those without one, and leaf galls on the pin oak trees were observed to be infested with P herfsi .5 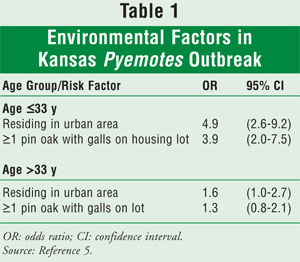 Differential Diagnosis
Arthropod bites can be mistaken for mite bites. Some arthropods that commonly bite humans are chiggers, also known as redbugs ( Eutrombicula alfreddugesi ); mosquitoes; cat fleas; bedbugs; and scabies mites.10 Chigger bites commonly occur beneath areas of restrictive clothing such as belts, underwear, and socks. Morphologically, the chigger bite resembles the Pyemotes bite except that the chigger itself frequently appears as a tiny red dot in the center of the urticarial lesion. Chigger bites are usually few in number, compared with the large number of Pyemotes bites on many patients. Chiggers do not burrow; they feed at the base of a hair follicle or in a pore. The bites commonly cause itching in three to six hours, and dermatitis develops in 10 to 16 hours. In the South, chiggers are active virtually year-round and commonly are encountered in woodlands and along swamps. Chiggers feed on skin tissue over a period of several days.10,11

Mosquito bites are usually associated with itchy wheals of short duration. They are generally found on uncovered portions of the body and do not tend to be grouped. Considerable variation in clinical appearance can be noted in the bites of the 160 species of U.S. mosquitoes.10

Cat-flea ( Ctenocephalides felis ) bites usually are located only on the lower extremities of the body--the legs and ankles. The lesions are grouped, itchy, and raised, with a central round minute spot differing in color from the surrounding tissue. Secondarily infected lesions are commonly found. Generally the patient is aware of having been bitten.10

Bedbug ( Cimex lectularius) bites are usually found upon arising in the morning. They appear as grouped, itchy papules around the waist or on other areas not covered by clothing. Because of their complex nutritional requirements, bedbugs--which emit an offensive odor--come in contact with their human host only during feeding. During feeding, injected saliva produces an allergic reaction. The reaction causes delayed swelling, itching, and burning that may continue for seven days or longer.10,11

Scabies mites ( Sarcoptes scabiei) burrow into the skin and produce a persistent, intensely itchy rash that often takes the form of grayish lines. The adult female burrows into the outer layer of the skin, where she feeds on tissue fluids and lays eggs that she cements to the floor of the burrow. The rash and intense itching associated with scabies usually occur several weeks to a month after the initial infestation. The majority of scabies mites are found in lesions in the folds of skin between the fingers, on the sides of the feet, on the wrists, on the genitals, and in the bends of the knees and elbows. Diagnosis may require superficial skin scrapings. Personal contact, particularly holding or shaking the hand of an infested person, is a key method by which the mites are spread. Scabies mites cannot survive off a human host for more than about 24 hours.11

Clinical Description of Pyemotes Bites
The bite and subsequent dermatitis are characterized as an itchy, raised, solid lesion (papule) surmounted by a clear, pinhead-sized vesicle that later becomes clouded by purulent material. Excoriated lesions may predominate due to the extreme pruritus. A hyperpigmented area may persist for varying periods following an early inflammatory process.10 There appears to be a delayed reaction (10-28 hours) to the bites, with no initial prickling sensation when bitten. The affected areas usually include the neck, arms, shoulders, and upper torso.9,12 A majority of respondents to one survey said that the rash resolved in one to seven days, with some reporting resolution at 10 to 14 days.5,13 Few individuals (less than 20%) with rash reported accompanying symptoms like fever, runny nose, and wheezing. 5 Ninety-five percent of respondents reported spending time outdoors 24 hours before the onset of the rash or lesion.5 Six percent of respondents recalled an insect bite within 24 hours before the appearance of the rash or lesion.5 Although no record exists of a human death caused by the bites of these mites, secondary infections from excessive scratching occurred. Many reports have documented the hospitalization of victims.9,14

Prevention
Preventive recommendations for minimizing exposure to mites appear in TABLE 2. For trees, typical spray applications are not effective because the mites are protected by the galls. Midges feeding on tree leaves provide a better target for controlling mites. Two key preventive measures recommended by the World Health Organization for humans are to avoid infested areas and to apply diethyltoluamide (DEET).5 DEET has been shown to be the most effective agent for repelling some mite species, although still with some mixed results.5,8 Individuals also should wear clothing that covers as much of their skin as possible when they are outside in infested areas. 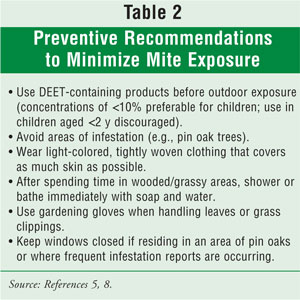 Treatment
The main treatment goal for mite bites comprises symptomatic relief and prevention of secondary bacterial infections from excessive scratching ( TABLE 3). Nonemergency symptoms vary depending on the type of insect bite. Typically, when bitten by an insect, people experience localized pain, redness, swelling, or itching. Occasionally, these symptoms are accompanied by burning, numbness, or tingling. Mite bites generally go unfelt; they should be treated once the signs (which include increased redness, swelling, and pain) appear. Start by thoroughly washing the site with soap and water. This should be followed by application of an ice pack and, possibly, the use of antihistamines or hydrocortisone creams to relieve the itching. The rash typically resolves after a few days through the use of topical steroids. Because a bite can potentially progress to infection due to scratching caused by the extreme itchiness, it is important to watch for signs. 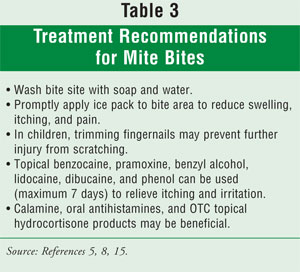 Conclusion
The mysterious bites that afflicted residents of some Chicago suburbs last summer were probably from the P herfsi mite. It is difficult to positively confirm Pyemotes because of its microscopic size. The clinical suspicion of Pyemotes should be raised when a characteristic lesion (itchy, raised papule with a pinhead-sized purulent vesicle) is identified. Utilization of preventive measures like DEET and appropriate clothing are ideal for limiting exposure to self and others. Secondary infections can occur from excoriation of the skin due to continual scratching. Treatment should be with agents that relieve the itching

13. Gordon DM. Could Pyemotes mites be biting me? May 18, 2005. www.pittstate.edu~dgordon/MysteryBites/PyemQuestions.html. Accessed January 9, 2008.