Rashes are ubiquitous in the American population, being one of the more common reasons for pharmacy and physician visits. This is due to the fact that rashes can be caused by many nonallergenic problems, but also by exposure to thousands of chemicals and other substances, as well as dozens of other diagnoses. Dermatitis causes over seven million visits to physicians annually and over 430,000 hospital outpatient visits.1 Patients who opt for self-treatment are not included in these totals, but doubtless encompass millions more.

The Major Categories of Dermatitis
Several etiologies are responsible for the majority of dermatitis cases. Pharmacists must have a thorough understanding of each.

Allergic Contact: This requires sensitization, with a dermatitis occurring on reexposure. Therefore, nonsensitized individuals will not react to the potential allergen, while previously sensitized persons can react violently. Patients can react to chemicals from which shoes or glasses are made, cosmetics, fragrances, cleaning solutions, cheap jewelry, clothing, plants, wound dressings, snuff, and virtually thousands of other substances.2-10 The lesions are usually vesicular, with an intense pruritus. Patients more prone to this problem are those who frequently come into contact with foreign substances, such as hairdressers.11,12 Allergic contact dermatitis may be self-treatable with nonprescription products, unless the patient requires referral due to complicating issues (see Treatment Guidelines for Dermatitis).

Irritant Contact: Irritant contact dermatitis (ICD) occurs when the skin is subjected to mechanical or chemical irritation that directly damages tissue, and is responsible for about 80% of cases of contact dermatitis.13 ICD can be differentiated from allergic contact dermatitis in several respects: 1) symptoms often begin within minutes to hours of exposure; 2) pain, burning, stinging, and discomfort are often more troublesome than pruritus; 3) red macules, hyperkeratosis, and fissures are more common than vesicles; and 4) the epidermis appears glazed or scalded.13 Since ICD is nonallergic, all individuals who undergo similar trauma can suffer the resultant dermatitis.13 ICD can occur from washing the hands too frequently, as detergents compromise the skin's natural lipid barrier. ICD is also common in patients of any age who repeatedly lick their lips. The pharmacist may discover that the patient has engaged in hazardous activities that exposed the skin to irritant chemicals such as acids and bases (e.g., cleaning car batteries, using powerful cleaners). The pharmacist should advise these patients to avoid further exposure to the irritant whenever possible. If the skin is badly damaged, a physician referral is prudent. For minor irritation, protectants such as petrolatum can help return the skin to normal.

Atopic: This is a chronic inflammatory condition that develops due to an underlying genetic defect, but is exacerbated by exposure to environmental irritants or allergens.14,15 It often coexists with asthma and allergic rhinitis. 15 The condition is rapidly increasing in prevalence. Over the past 30 years, it has become two to three times more common.16 It affects 15% to 20% of young children, making it highly likely that the pharmacist will be asked about therapy.14 The lesions are red plaques with serous discharge, often exhibiting secondary infected excoriations from repeated scratching.17 Common locations are the cheeks, buttocks, and flexural areas such as the knees and elbows.18 The condition spontaneously resolves in about 40% of children by early adolescence.15 However, it persists in 1% to 3% of adults.16 Therapy involves topical immunomodulators, topical steroids, and other systemic treatments. 15 For this reason, the pharmacist is best advised to refer patients to a dermatologist.

Specific Causes of Dermatitis
There are some specific causes of dermatitis that the pharmacist may be able to recognize. Some are typical of allergic contact dermatitis, while others are irritant in etiology.

Postpiercing: Patients may report dermatitis following a piercing. In these cases, the cause may be an allergic contact dermatitis induced by nickel, gold, or cobalt in the jewelry inserted into the artificial body opening.19 The patient should be advised to visit a physician for inspection of the artificially created wound(s) and recommended to remove the jewelry until the problem is resolved.

Posttattoo: The community pharmacist asked about dermatitis should inquire if it is an area that can be viewed. If so, the pharmacist should inspect the site for the presence of a tattoo. Patients can develop an allergic contact dermatitis to injected pigments used in permanent tattoos.20 These patients should be referred for a physician check to determine if other problems may also be present (e.g., infection, immunological rejection of the tattoo). Patients are often also allergic to temporary henna tattoos, which usually involve topical application of such additional chemicals as essential oils, coffee, tea, indigo, or other allergens.21 This type of local reaction to topically applied chemicals may gradually subside and may benefit from short-term application of nonprescription products.

Incontinence: Some patients are incontinent or caring for an incontinent spouse/parent. They may ask the pharmacist about dermatitis that occurs in areas that come in contact with urine and feces.22 The etiology is virtually identical to diaper rash, being an irritant type of contact dermatitis. Changes in the skin pH under occlusive adult incontinence garments allow fecal enzymes in feces to damage skin. If the skin is broken, a physician should be consulted to assess possible bacterial/fungal infection. Prevention consists of removing urine and feces from the skin as quickly as possible and applying barrier ointments with protectant properties (i.e., petrolatum).

Insect-Induced: The pharmacist should ask the patient with a rash about recent outdoor activity and possible exposure to ticks, indicating potential Lyme disease or Rocky Mountain spotted fever. The rash may be the typical erythema migrans of Lyme disease caused by a tick bite; this lesion may be solid red or may present with a bulls-eye appearance, with one or more rings around a central point, about four inches in diameter.23 Rocky Mountain spotted fever usually begins two to 14 days after a tick bite, with a fever over 102F followed by a rash after three to five days. The rash is composed of pink/red macules beginning on the wrists and ankles, moving to the palms and soles, and eventually involving the proximal portions of the arms, legs, and trunk.24 A worsening rash with pruritus, urticaria, papules, vesicles, and excoriated spots may indicate scabies.25 These three rashes due to insects are not contact dermatitis, and must be immediately referred for physician care.

Medication-Induced: Patients should be asked whether they have recently applied any topical medication to the area. Neomycin is a major offender, mostly due to the fact that patients often choose "triple antibiotics" (e.g., Neosporin) rather than less allergenic bacitracin/polymyxin ointments (e.g., Polysporin).13 However, patients may be allergic to a wide variety of other topical medications. If the medication is a prescription product, the patient should be advised to consult the prescriber for advice on the best route to take. If an OTC product is a possible cause (e.g., a specific sunscreen), the pharmacist can suggest an alternate product with different ingredients.

Treatment Guidelines for Dermatitis
When dermatitis is self-treatable, the pharmacist can be guided in self-care recommendations by several general rules. Patients should be referred if dermatitis persists for more than seven days, appears to clear up and then worsens, covers a large portion of the body, causes severe pruritus, or is in a location difficult to care for (e.g., periorbital areas, conjunctiva, inner nostrils, otic canal, vagina). Nonprescription products should not be recommended if the patient is less than 2 years of age. Patients with hives should be referred if the hives are an unusual color, bruised, blistered, or do not itch.

These are a disparate group of products of varying degrees of safety and efficacy. Most are labeled for relief of pain and/or itching caused by minor skin irritations or rashes, such as those caused by insect bites, or poison ivy, oak, and sumac.26

Antihistamines: Topical antihistamines also produce a degree of local anesthesia, but diphenhydramine (e.g., Benadryl Cream, Gel, Spray) has been the focus of FDA concern due to the risk of toxic psychosis when it is used on chicken pox, poison ivy, and sunburn, especially in pediatric patients. For this reason, labels warn against use on chicken pox, measles, blisters, or extensive areas of skin without physician advice. The labels also warn against concurrent use with any other form of diphenhydramine, even oral dosage forms.26 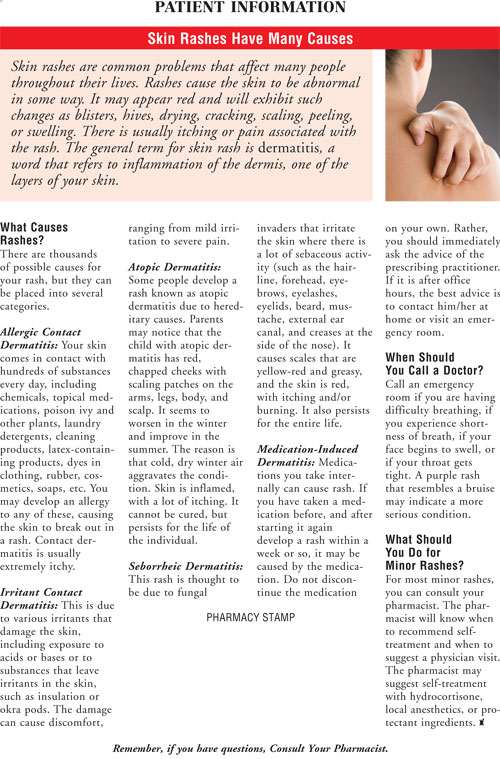