Scarlet fever is an infectious disease caused by invasion of the upper respiratory tract by the Gram-positive bacterium Streptococcus pyogenes.1 Ordinarily the resultant illness is self-limiting, but more invasive infection that goes untreated can be fatal. Scarlet fever was a serious, life-threatening disease for thousands of children during the 19th century; it resulted in pandemics with substantial mortality rates.2 One reason for this disproportionate loss of life may have been misdiagnosis (as measles) or underdiagnosis.1,2 Scarlet fever, which typically affects children aged 2 to 10 years, is rare due to exposure to S pyogenes by 10 years of age in most children. 3,4 The introduction of penicillin also contributed to the decreased incidence of scarlet fever and its subsequent complications, such as rheumatic fever; however, the decrease in incidence predates penicillin's introduction. 5 See TABLE 1 for a historical perspective on scarlet fever. 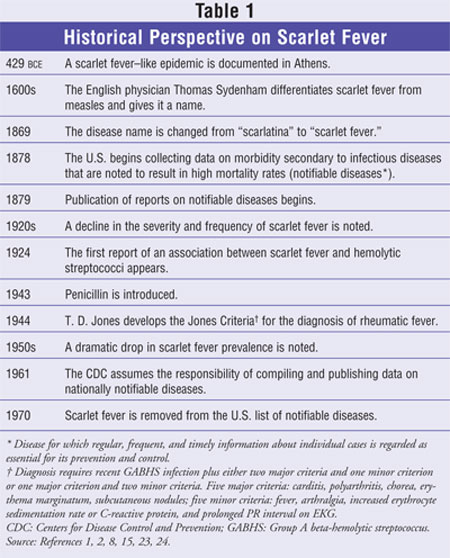 Since 1999, a total of 9,400 cases of scarlet fever have been reported in the United States by the Centers for Disease Control and Prevention; 300 cases of streptococcal toxic shock syndrome (STSS) and 600 cases of necrotizing fasciitis have been reported during this period. These cases may be an under- or overestimation of incidence because scarlet fever has not been a notifiable disease in the U.S. since 1970.6 Approximately three million cases of strep throat (acute pharyngitis and tonsillitis) and impetigo secondary to streptococcal infection are reported yearly, however.6 The number of cases of scarlet fever reported in 2004 in England and Wales, Scotland, and Northern Ireland, respectively, wasÜ 2,200, 190, and 228.2

The causative organism, S pyogenes, is classified as a Group A beta-hemolytic streptococcal (GABHS) infection. It is the common cause of sore throat and fever associated with strep throat and other skin infections (e.g., cellulitis, impetigo, necrotizing faciitis, and erysipelas).7 Most cases of scarlet fever are preceded by erythematous sore throat and fever; however, the disease can result from other infectious illnesses, such as those associated with wounds and burns.2

Transmission
GABHS is spread by infected individuals during subclinical and acute illness via coughing, sneezing, or aerosolizing respiratory droplets.2 With a brief incubation time of two to four days, the bacterium propagates into the bloodstream via the infected throat, wound, or burn.2,8 Without antibiotic treatment, patients can be considered contagious for several weeks; however, with treatment, communicability diminishes within 24 hours.9 Left untreated, the infectious period can last from 10 to 21 days.10

Signs and Symptoms
Clinical signs associated with scarlet fever include manifestations of both the skin and the soft tissue, such as a bright red (scarlet) rash, strawberry tongue (i.e., swollen red tongue with a white, fur-like coat and red, protruding papillae), and lymphadenopathy.3,8 The onset of sore throat and fever typically is sudden, with other symptoms, such as headache, chills, nausea, vomiting, abdominal pain, and malaise, occurring shortly thereafter. 7,11,12 Upon examination, the tonsils are swollen, with yellow or grayish-white exudate. The rash typically develops within one to two days of disease onset; within two to three days the white coating on the tongue resolves, leaving a raspberry tongue (i.e., bright red, swollen tongue with large papillae).2,8

The Rash
The skin manifestation of scarlet fever is theorized to be the result of erythrogenic toxins produced by the bacteria that result in a delayed hypersensitivity reaction.2,13 Most patients who develop this hypersensitivity reaction have had prior exposure to GABHS.14 The nonpruritic, painless rash is predominantly generalized along the skin folds of the trunk in a linear formation (Pastia's lines), on the extremities, and in the pharyngotonsillar area; 24 hours prior to this, its initial appearance is as small red bumps on the axillae, groin, and neck.13,14 The cheeks appear flushed, but the area around the mouth is pale.2 The rash whitens when pressure is applied. The rash resembles sunburn and feels like sandpaper; desquamation of the skin on the trunk, face, and fingertips occurs during convalescence. Seven to 10 days after initial presentation, when the fever abates, erythema decreases and desquamation of the trunk, face, and fingertips begins; this may last for days to weeks as sheets of skin peel off the face, torso, hands, and feet.8,11,15

Cultures of throat secretions are necessary to differentiate viral from bacterial etiology of pharyngitis. Both the tonsils and the posterior pharynx should be vigorously swabbed. If throat swabs are taken correctly, the culture propagates GABHS in 90% to 95% of patients with signs and symptoms.8 False-negative diagnosis occurs in less than 10% of patients.9 Cultures that are negative for GABHS for 24 hours should be incubated for a second day to ascertain that the cultures really are negative.9

RADTs using throat swabs are useful because results can be reported within hours of specimen collection. 8 The test detects nitrous acid extraction of group A carbohydrate antigen from organisms in throat swabs.9 The specificity (i.e., ability of a test to correctly identify patients without the disease) of the tests is high; however, the sensitivity (i.e., ability of a test to correctly identify patients with the disease) of the tests varies.8 Therefore, if the RADT is negative, a confirmatory throat swab should be ordered to make certain that the patient does not have group A streptococcal (GAS) infection; positive tests do not need to be confirmed.9 Although RADTs are recommended by the American Academy of Pediatrics, the Infectious Diseases Society of America, and the American Heart Association for pediatric patients, recommendations for adult patients by the American College of Physicians are controversial due to the test's lack of diagnostic precision. 8,16,17

Diagnosis of previous GABHS infection can also be made by testing for streptococcal antibodies. Tests for antistreptolysin O and anti-DNase B are used more frequently due to commercial availability. Although these tests are not useful for acute infections, previous exposure can be detected by determining the difference between current antibody titers for a given individual and mean titers for a given population. If the initial titer is 200 Units/mL, the majority of patients experience a two-fold or greater increase in titers between acute and convalescent phase values.8 This diagnostic test may be beneficial for patients who present with recurrent infections.

Treatment
The drug of choice for the treatment of scarlet fever is penicillin. The dose of orally administered penicillin is 250 mg (400,000 Units) two to three times daily for ten days for children weighing less than 27 kg (60 lb), and 500 mg (800,000 Units) two to three times daily for all other patients.2,3,9,11,18,19 A full course of 10 days is recommended to prevent the occurrence of acute rheumatic fever.9 If nonadherence limits therapy, intramuscular (IM) penicillin G benzathine is appropriate when given in a single dose of 600,000 Units for children who weigh less than 27 kg; all other patients should receive 1.2 million Units. The pain from administration of the IM formulation may be reduced by maintaining medications at room temperature prior to injection.9 A combination of penicillin G benzathine (900,000 Units) and penicillin G procaine (300,000 Units) is appropriate for children; however, efficacy has not been demonstrated in adolescents and adults.9

Patients who are allergic to penicillin may take oral erythromycin unless bacterial resistance to erythromycin is suspected. Erythromycin estolate (20-40 mg/kg/day orally in two to four divided doses) or erythromycin ethylsuccinate (40 mg/kg orally per day in two to four divided doses) should be administered over 10 days. Clarithromycin or azithromycin administered for 10 or five days, respectively, also may be considered.9 Oral cephalosporins may be considered for patients who may be allergic to penicillin; however, the potential for hypersensitivity to both penicillin and cephalosporin should be weighed in patients with severe allergy to penicillin.

A patient who experiences recurrence of symptoms shortly after completing a 10-day course of an appropriate antibiotic can be re-treated with the same antibiotic or given an alternative oral or IM antibiotic. Some alternatives are narrow-spectrum cephalosporin, amoxicillin clavulanate, clindamycin, erythromycin, and other macrolides; the order in which these antibiotics should be used has not been clarified, however.9 Refer to TABLE 2 for treatment options for scarlet fever. 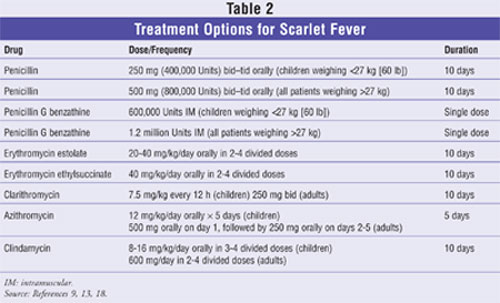 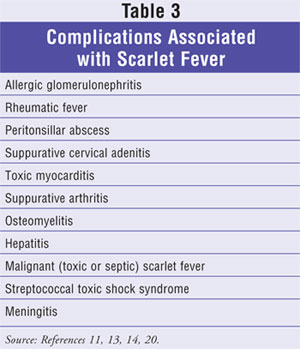 Severe forms of scarlet fever and complications resulting from inappropriate treatment are extremely rare in developed countries.10 These complications are not specific to scarlet fever, as they may develop in patients who have other infections caused by Streptococcus.11 Severe systemic reactions are thought to be mediated by GABHS pyrogenic exotoxins.15 Fatalities from scarlet fever are uncommon; only five deaths from streptococcal sore throat and scarlatina were reported in the U.S. in 1983.1 The most severe complications are discussed below.

Peritonsillar abscess is caused by a combination of GAS and the formation of a polymicrobial abscess that is predominated by anaerobic throat flora.8 The infection typically responds to prompt drainage and treatment with penicillin. A patient with an abscess experiences an abrupt increase in pain and dysphagia, neck swelling, and fever after the initial symptoms of pharyngitis. Prompt treatment is recommended to prevent fatal necrotizing fasciitis of the neck.

Several cases of hepatitis have been reported as a complication of scarlet fever.15,21 In the first case, a 9-year-old boy developed hepatitis that resolved after 20 days of rehydration and bed rest.15 In another case report, two children experienced hepatic complications of scarlet fever.21 The patient in the first case was also receiving erythromycin, which is known to cause hepatic dysfunction.18 However, hepatic complications have been reported in patients diagnosed with scarlet fever who did not receive erythromycin.

The incidence of STSS has increased over the past decade. Patients with this severe complication, which frequently results in death, present with hypotension, multiorgan failure, and bacteremia. Necrotizing fasciitis and severe pain and tenderness may also occur.14

Three types of malignant scarlet fever have been described, including anginose, hemorrhagic, and atactic.22 These manifestations typically occurred before the introduction of antibiotics, antipyrectics, and anticonvulsants. The anginose form is characterized by membranous exudation of the throat with necrosis of the soft tissues of the pharynx and soft palate. Exudation could extend into the trachea, bronchi, eustachian tube, and middle ear. The necrosis was reported to be so extensive in severe cases that necrosis of the carotid artery occurred, with fatal hemorrhaging; death usually resulted in six to 14 days. Skin hemorrhaging, hematuria, and epistaxis occurred in patients with the hemorrhagic form of scarlet fever. These symptoms typically occurred within the first two to three days of the illness. Patients with atactic scarlet fever presented with symptoms resembling acute intoxication. These patients typically had fever as high as 108F, extreme restlessness, headache, and delirium. Death usually occurred within 24 to 48 hours.20,22

Summary
Scarlet fever is a rarely occurring infectious disease triggered by a hypersensitivity reaction secondary to a GABHS pyrogenic toxin. Symptoms are usually mild. Patients with scarlet fever initially present with sore throat, fever, and a scarlet rash. The rash starts on the head and neck and then spreads to the trunk and extremities. The rash is typically more marked in the skin folds of the trunk. A distinctive feature of the rash is desquamation of the affected skin on the torso, face, and extremities during recuperation.

Diagnosis of scarlet fever is made based on patient symptoms and the presence of infection demonstrated by diagnostic tests. After the diagnosis is confirmed, the drug of choice for treating the infection is penicillin, although some other agents (i.e., erythromycin, cephalosporins, or clindamycin) can be used in patients who are allergic to penicillin. Untreated scarlet fever can result in several complications that can progress to death; therefore, prompt treatment is necessary. Although scarlet fever is generally thought of as a disease of the past, prompt and accurate diagnosis is necessary to prevent associated complications.