Dementia can devastate the lives of patients and their families. While it is not a specific disease, dementia is a chronic and usually irreversible deterioration of cognition. 1 It is often difficult for families and caregivers to grasp the global nature of this condition. With the loss of intellectual capacity, activities of daily living and social and occupational functions are no longer carried out with ease or reliability, if at all. A patient's impaired communicative ability poses misunderstandings, misinterpretations, frustration, and embarrassment for family members and caregivers. Affecting four to five million individuals in the United States, dementia strikes approximately 5% of individuals age 65 to 74 and 40% of those older than 85.2

Diagnosis and Differential Diagnosis
The diagnosis of dementia is clinical and based on the development of multiple cognitive deficits manifested by bothmemory impairment (an impaired ability to recall learned information or learn new information) and at least one of the following: aphasia (language disturbance), apraxia (impaired ability to perform motor activities despite intact motor function), agnosia (inability to recognize or identify objects despite intact sensory function), or a disturbance in executive functioning (planning, organizing, initiating, sequencing, or abstracting).3  The loss of executive ability renders the individual unable to think abstractly and function through volitional activities.3,4 Distinguishing the causes and type of dementia (TABLE 1) is difficult since a definitive diagnosis usually requires a pathological examination of brain tissue at autopsy. Other conditions have been identified as potential causes of dementia or dementia-like symptoms. These include metabolic problems (e.g., hypercalcemia), endocrine abnormalities (e.g., hypothyroidism), some structural brain disorders (e.g., normal pressure hydrocephalus, subdural hematoma), nutritional deficiencies (e.g., vitamin B12, folic acid), infections (e.g., HIV, Lyme disease, syphilis), poisoning (e.g., lead), brain tumors, anoxia or hypoxia, and cardiac and pulmonary problems.1-3,5 Adverse reactions to medications, such as anticholinergic agents, antihistamines, and sedative hypnotics, can cause confusion and cognitive impairment, mimicking dementia, and may even cause acute delirium, requiring immediate medical attention. The deterioration of cognition associated with these situations may resolve with appropriate treatment and/or the removal of the offending agent.1 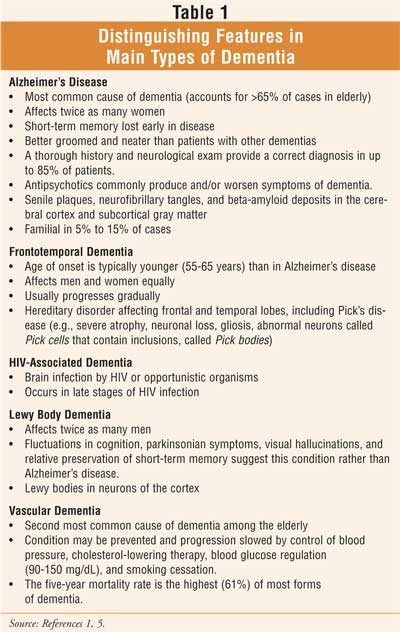 The most common differential diagnoses in the assessment of dementia are delirium and depression.2 Acute delirium may indicate a medication-induced condition or the development of an acute medical condition, such as those outlined above. Delirium is a common and usually reversible syndrome which may be precipitated by almost any organ system–related acute illness or may be an exacerbation of an existing chronic illness; drugs are the most common reversible cause of delirium. 6-8 Although difficult, it is crucial to distinguish between delirium and dementia since delirium is usually reversible when treatment is prompt. 1 Assessment of attention is recommended as inattention likely indicates delirium.1 A thorough history, physical examination, and testing (e.g., complete blood count, thyroid-stimulating hormone, vitamin B 12, CT, or MRI) would determine other features suggesting delirium. 1,2

Depression can present comorbidly with dementia but can also occur separately and precipitate significant cognitive changes. The depressed elderly may be irritable, have a decrease or loss of interest in activities, and experience weight gain or loss and daily insomnia or hypersomnia.2 When a major life change occurs in a senior female patient, such as a recent stroke or myocardial infarction, screening for depression should be considered.2 Women of advanced age are more likely to suffer from depression than their male counterparts, even though their risk of suicide is lower.9,10 This holds true regardless of economic status, ethnicity, or race.2 Furthermore, because complaints of pain are common in elderly patients with depression, and since depression is common in those with pain, pain can signal depression that might be otherwise overlooked in this population.11

Clearly, there are variations in aging, and while dementia is common in very elderly individuals, dementia is not part of the normal aging process. The cognitive effects of normal aging encompass both preserved and declining cognitive functions. For example, in normal aging, under the cognitive domain of memory, preserved functions would include remote memory, procedural memory, and semantic memory, while learning and recall of new information would show decline.12 Dementia would be distinguishable from age-associated memory impairment, which presents as deficient recall relative to a senior's previous youthful ability; this decline is not progressive, nor does it affect daily function.1 In fact, changes in memory may be the most common cognitive complaint self-reported by seniors.

Mild Cognitive Impairment
When there is cognitive impairment in an aging individual that does not meet the diagnostic criteria for dementia and is not attributable to a medical condition, it is often referred to as mild cognitive impairment(MCI).12 MCI involves a subjective memory complaint, and while there is memory impairment (as compared with that of age-matched controls) other cognitive domains (e.g., reasoning, judgment, writing) and daily function are not impaired.1 While knowledge about factors that predict the development of MCI is limited, it is often a precursor to Alzheimer's disease (AD).13 While longitudinal research has suggested that 80% of individuals with MCI will progress to develop AD within five to eight years, other authors note that up to 50% of patients with MCI develop dementia within three years.1,12

A recent study found that among community-dwelling older persons without manifest cognitive impairment, difficulty in identifying odors predicts subsequent development of MCI.13 A longitudinal cohort study examined motor function in persons with MCI and its relation to risk of AD.14 At baseline, persons with MCI had impaired motor function relative to those without cognitive impairment and superior motor function compared with the individuals with dementia. Among those with MCI, baseline levels of lower extremity motor performance, parkinsonian gait, and bradykinesia were inversely related to risk of AD, even after controlling for clinical stroke. Findings revealed that a person with impaired lower limb performance or parkinsonian gait was two to three times more likely to develop AD than a person with good lower limb function. The researchers concluded that individuals with MCI also have impaired motor function, and the degree of impairment in lower extremity function is related to the risk of AD.14

Screening for Dementia
The prevalence of dementia is high in advanced age, so screening for dementia is recommended particularly for women older than 75, since the life expectancy of women is greater than that of men at every age and older women are more likely than their male counterparts to reside without a spouse and live alone.15 In attempting to maximize independent functioning and avoid accidents and injuries, assessment of physical and cognitive function is recommended in the overall care of older females to establish current ability and determine areas where assistance may be necessary.

The Folstein Mini-Mental State Examination (MMSE) is considered the most widely used single test for evaluating mental status in the elderly.16-18 This neuropsychological instrument has been widely translated and can be reliably administered by any practitioner trained to do so (e.g., physician, psychologist, pharmacist, nurse, social worker) as a screening test for dementia.

The Aging, Demographics, and Memory Study, part of the Health and Retirement Study (HRS) and sponsored by the National Institute on Aging (NIA), is primarily conducting in-depth investigations related to the impact of dementia on formal health care utilization, informal caregiving, and the total societal costs of this care. 19 Secondarily, the study will examine the validity of the HRS cognitive functioning measures as a screening tool for cognitive impairment or dementia.

Medication Therapy
Through a medication regimen review, the avoidance or restriction of anticholinergic and sedating agents in seniors can minimize and avoid medication-induced cognitive impairment that may worsen dementia and cause delirium. Avoiding central nervous system–depressant medications eliminates drug-induced functional impairment. Medications approved for the treatment of AD do not halt the disease or reverse brain damage; however, they can improve symptoms and slow progression of the disease, which may improve quality of life, ease the burden on caregivers, or delay admission to a nursing home.5 Studies are looking at whether these cognition-enhancing agents may be useful in the treatment of other types of dementia. For AD, the cholinesterase inhibitors modestly improve cognitive function and memory in some individuals; donepezil, galantamine, and rivastigmine are generally equally effective, while tacrine is rarely chosen due to hepatotoxicity.1 The most recent agent approved for AD is the N-methyl-D-aspartate receptor antagonist memantine, which appears to slow the progression of the disease.1 Estrogen does not appear to be useful in the prevention or treatment of AD, and the efficacy of nonsteroidal anti-inflammatory drugs, high-dose vitamin E, selegiline, Ginkgo biloba extracts, and cholesterol-lowering statins is unclear.1

While the efficacy of cognition-enhancing agents in vascular dementia is unclear, prevention of this condition is recommended through a variety of measures (TABLE 1). The Journal of the American Geriatrics Society reported a recent study that looked at trends in blood pressure control and cognition across a spectrum of older ages focusing on blood pressure changes before onset of dementia.20 The researchers reported that high systolic blood pressure was associated with greater risk of dementia in the young elderly (<75 years) but not in older individuals. They suggested that adequate control of hypertension in early old age may reduce the risk for dementia.20

For Lewy body dementia, treatment is generally supportive, although cholinesterase inhibitors may improve cognition. Extrapyramidal symptoms, appearing in half of these patients, respond to antiparkinsonian agents, with the risk of worsening psychiatric symptoms.1,21 HIV-associated dementia is primarily treated with highly active antiretroviral therapy to increase CD4 + counts and improve cognitive function; even with immune restoration, there is no specific treatment for HIV-induced cognitive dysfunction.1 Similar supportive measures, as with the other dementias, would also apply. While antipsychotic agents can help to reduce paranoia, they may worsen confusion, cause extrapyramidal effects, and tardive dyskinesia or tardive dystonia (which may not resolve upon reduction of dose or discontinuation). Antipsychotic efficacy has been shown only in psychotic patients. Furthermore, a U.S. Black Box Warning states, "Elderly patients with dementia-related behavioral disorders treated with atypical antipsychotics are at an increased risk of cerebrovascular adverse effects and death compared to placebo." 21 Nonanticholinergic antidepressants, preferably SSRIs, are recommended for dementia patients with signs of depression.1

Nonpharmacologic Intervention
According to the National Institutes of Health, many people with dementia, especially during the early stages, may benefit from practicing tasks designed to improve performance in specific aspects of cognitive functioning.5 For example, seniors may be able to learn to use memory aids, such as mnemonics, computerized recall devices, or note taking.5 A prospective study found women with higher levels of baseline physical activity such as walking and stair climbing were less likely to develop cognitive decline.22 Although this association was not explained by differences in baseline function or health status, the finding supported the hypothesis that physical activity prevents cognitive decline in older community-dwelling women. 22

Role of the Pharmacist
Pharmacists may take an active role in the care of the dementia patient through medication regimen review for appropriate therapy and avoidance of potentially inappropriate medications. Screening for dementia and assisting in the prevention of vascular dementia through monitoring and educating in the areas of blood pressure control, cholesterol-lowering therapy, blood glucose regulation, and smoking cessation is recommended. Providing caregiver guidance with regard to education, patient referral, and recommendations for appropriate treatment of dementia, pain, and depression may maximize the cognitive and functional ability in these vulnerable individuals.