Delirium is an acute, confused state. It has a fluctuating course, characterized by disturbances in attention, cognition, and consciousness.1 A typical scenario may include a patient who is sluggish one moment and alert the next, or calm and focused one moment and agitated and distracted the next.2 These situations may vary from slight to severe within minutes to hours and last days to weeks.3,4 Patients with delirium exhibit a reduced capacity to sustain attention to things in the environment, and they may present with misinterpretations of events, illusions, and hallucinations (e.g., visual and tactile). While its onset is frequently fairly rapid, a slower onset may be seen if it is secondary to metabolic factors (Table 1). Patients may be fearful, paranoid, hyperactive, and hyperalert, or they may become quiet, withdrawn, and lethargic.5 Delirium requires immediate medical attention.5 In psychiatry, delirium is classified as an organic mental syndrome. 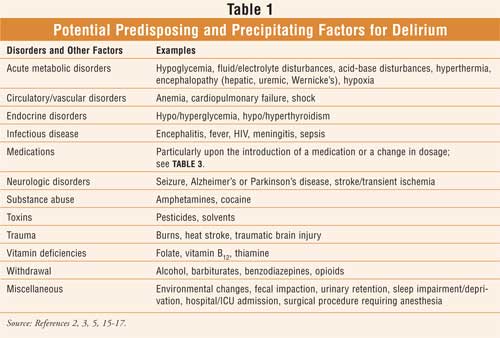 While clinically important and potentially fatal, delirium often goes undetected or misdiagnosed as dementiaor another psychiatric illness, despite potential strategies (e.g., risk-factor assessment) that can improve detection, diagnosis, and potential resolution.6 Unlike dementia, which is gradual in development, chronic in nature, and usually irreversible, delirium is a transient condition that is usually reversible (Table 2).5 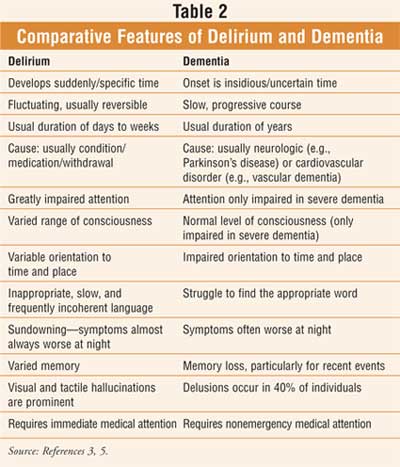 While a diagnosis of delirium is made clinically, imaging and laboratory testing assist with establishing cause and thereby identify necessary supportive measures and corrective treatment. A thorough history should include alcohol and prescription, OTC, and illicit drug use, as well as regimen modifications, such as new medications, discontinued medications, or changes in dose (including overdosing).5

Delirium is more common in the elderly (individuals over the age of 85 are especially susceptible) than other individuals and among nursing home residents as well. This condition accounts for at least 10% of elderly patients who are admitted to the hospital; approximately 15% to 50% of seniors experience delirium at some time during a hospitalization.5 Risk factors include advanced old age, brain disorders (e.g., underlying dementia, Parkinson's disease, and stroke) functional impairment, sensory impairment, and medical comorbidities along with their respective treatments (Table 1).3,5 Overall, delirium is a common and usually reversible syndrome that may be precipitated by almost any organ-system–related acute illness or an exacerbation of an existing chronic illness.3,7 Drugs are the most common reversible cause of delirium.8

The Hospitalized Senior
Delirium appears to be independently associated with significant increases in functional disability, length of hospital stay, rates of admission to long-term care institutions, mortality, and health care costs.9 Upon admission to a hospital, an elderly patient is at risk for confusion (delirium) when separated from familiar clothing, surroundings, and routines; sensory (e.g., vision) or cognitive (e.g., memory) impairment may not be as disabling in one's own environment, however, in the nonfamiliar hospital environment, isolation can increase risk.2,10 While there may be mild confusion in seniors during the fist week after surgery, there is an increased risk of delirium in an elderly postsurgical patient who has been exposed to anesthesia, particularly if prolonged and accompanied by an anticholinergic agent (e.g., for control of secretions); this is often the case with long and complicated procedures such as orthopedic and vascular surgery (e.g., coronary bypass surgery).2,5,10 The confusion may result in the self-removal of catheters, drains, and intravenous tubing or attempts to get out of bed, resulting in injury. When this occurs, postoperative delirium increases the difficulty and cost in patient management and causes severe discomfort to the patient.10 While delirium is associated with higher postoperative mortality and morbidity, and with delayed functional recovery, it is still unclear whether the prognosis is caused by delirium or a result of neurological damage with delirium as a symptom.10

Further, when a senior is hospitalized in the intensive care unit (ICU), the risk of delirium (ICU psychosis) is especially high.5 The isolation, lack of windows, frequent interruption of sleep for vital sign checks, and noisy electronic monitors contribute to the disorienting effect of the ICU experience.

Delirium at End of Life
Delirium (e.g., sudden confusion) is particularly common in the dying patient. Confusion may be attributed not only to medication intervention (e.g., for anxiety, pain, and shortness of breath) at this end-of-life stage, but also to conditions such as dehydration and sleep impairment.2 It is recommended that doses of potentially confusion-causing medications are decreased or discontinued; if necessary, haloperidol (e.g., to reduce fear or hallucinations) and a benzodiazepine (e.g., lorazepam for agitation and restlessness) are utilized for comfort; fever and dehydration are treated; and a calm and quiet environment is created.2

Delirium in Traumatic Brain Injury
Delirium may also present in the patient with traumatic brain injury. Haloperidol is recommended if treatment is required for a few days.5 While it is not clear whether other therapies are better for longer-lasting delirium, treatment with trazodone, gabapentin, valproate preparations, or quetiapine can be utilized.5

Medications
In high doses, anticholinergic medications, benzodiazepines, and narcotics are common causes of drug-induced delirium (Table 3).8 Even at recommended doses, these agents may cause confusion, cognitive impairment, and delirium in the elderly.11,12 Anticholinergic agents (i.e., muscarinic receptor antagonists) suppress the activity of the acetylcholine system in the brain; some of these agents also increase the concentration of dopamine in the synaptic cleft, which may result in psychotic symptoms.13 For example, oxybutynin, an antimuscarinic agent, may potentiate adverse effects on the central nervous system, including memory impairment, confusion, delirium, and hallucinations in elderly patients.13 Reconciling an individual's medication profile can assist in revealing medicinal causes for a patient's delirium; it is therefore recommended that a pharmacist be included early in the process of obtaining medication history.14 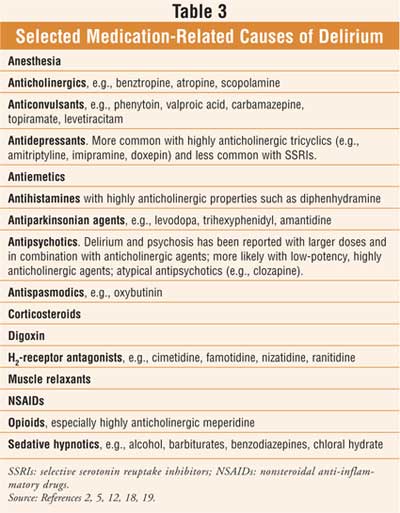 Delirium--The Behavioral Emergency
Haloperidol, with its negligible anticholinergic effects, is the medication most often used to treat the symptoms of delirium.1 In patients with delirium caused by alcohol withdrawal, short-acting benzodiazepines may be useful, although they may cause increased agitation in seniors and patients with hepatic dysfunction.1

Since few studies are available providing guidelines on how best to manage behavioral emergencies due to dangers and barriers to research in emergency settings, one group sought an expert panel for consensus.15

Allen et al. indicate that provisional diagnoses can be made with some confidence and that pharmacologic and nonpharmacologic interventions are selected differentially based on diagnosis, among other prominent demographic and medical features.15 The researchers note that benzodiazepines are recommended when no data are available, when there is no specific treatment (e.g., personality disorder), or when they may have specific benefits, as in the case of intoxication.15 No single second-generation antipsychotic agent emerged from the panel as a nonspecific replacement for haloperidol; rather, different second-generation antipsychotic agents were preferred in a variety of circumstances consistent with current evidence.15

Haloperidol is almost always recommended in combination with a benzodiazepine; haloperidol monotherapy is preferred only in those who are medically compromised.15 Conversely, the second-generation antipsychotic agents are more often recommended for use as monotherapy, and the panel advises to avoid combining benzodiazepines with some second-generation antipsychotic agents.15 When it comes to parenteral formulations, traditional agents (IM benzodiazepines, IM haloperidol) received more support from the experts than the new parenteral formulations when no data were available or the diagnosis was associated with medical comorbidity or intoxication.15

The panel recommended adding a benzodiazepine to the antipsychotic if an initial intervention with risperidone, ziprasidone, or haloperidol is unsuccessful; when initial treatment with olanzapine or quetiapine is unsuccessful, increasing the dosage is recommended.15 Perphenazine was consistently rated second line, while chlorpromazine and droperidol received third-line ratings.15 The authors concluded that the study guidelines suggest the second-generation antipsychotic agents are preferred for agitation in the setting of primary psychiatric illnesses, while benzodiazepines are preferred in other situations.15

Summary
Delirium is frequently observed in hospitalized, institutionalized, and postoperative patients, particularly in the elderly. Since causes of delirium can be multifactorial, a thorough medical and medication history can help determine the underlying cause of this disturbance. Successful treatment depends on identifying the reversible contributing factors; drugs are the most common reversible cause of delirium. Prevention of delirium is desirable for patients and providers in terms of morbidity, mortality, and health care expenditures.