Sexually transmitted diseases (STDs) (TABLE 1) can be contracted later in life--a fact too often overlooked by seniors and health care providers alike. Recent research has provided evidence that many older adults are sexually active; however, seniors know less about STDs and HIV/AIDS than younger individuals because the elderly have been neglected by those responsible for education and prevention messages.1,2 While it is estimated that 19% of all people with HIV/AIDS in this country are age 50 and older, the National Institute on Aging reports that there are more cases in seniors that go undocumented (TABLE 2).2 Clinicians are discovering HIV in seniors in growing numbers compared with previous years, and the number of older adults infected with HIV is expected to rise as baby boomers continue to age.2,3 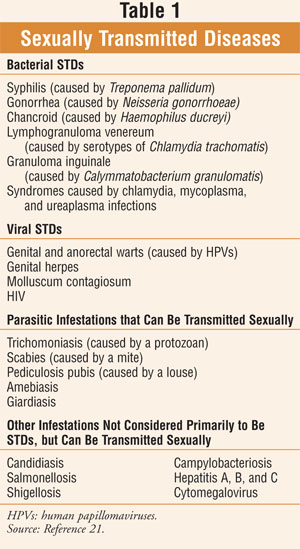 Sexual Activity and the Older Adult
Active sexuality continues in a rather high proportion of men and women in advanced age.4 A national representative study found the majority of older adults (ages 57–85) are engaged in spousal or other intimate relationships and regard sexuality as an important part of life.1 Reported sexual activity included vaginal intercourse, oral sex, and masturbation; activity did decline with age.1 The researchers noted that physical health is more strongly associated with many sexual problems than age alone.1 Among women studied, the most prevalent sexual difficulties included low desire (43%), difficulty with vaginal lubrication (39%), and inability to climax (34%); among men, erectile difficulties prevailed (37%).1 This particular study confirmed prior re­ search indicating that diabetes is positively associated with erectile dysfunction, as well as a lower prevalence of sexual activity with a partner and masturbation.1 Sexual problems among seniors are not frequently discussed with physicians, even though they may be a warning sign or consequence of a serious underlying illness (e.g., cancer, diabetes, infection, urogenital tract condition).1,5,6 When undiagnosed or left untreated, sexual problems can precipitate or co-exist with depression or social withdrawal.1,7-9 It should not be overlooked that patients may, and often do, discontinue required medicationssecondary to adverse effects that affect their sexual activity.1

Changes in social norms (e.g., dating, divorce, sex) and the huge market for medications and devices for the treatment of sexual problems targeting older adults facilitate more active sex lives.1,10 Early in the HIV epidemic, most HIV-acquired infections in seniors were secondary to blood transfusions.11 Since the introduction of donor screening, however, transmission by this route has decreased dramatically.11 Today, HIV infection in seniors is most commonly transmitted through sexual activity.11 Researchers studied the sexual behavior of self-identified gay men between the ages of 25 and 77.10,12 The study found that 44% of men older than 60 had multiple partners, virtually equal to the number in the 30 to 39 age group.10,12 Fewer older men were in long-term relationships with other men, and younger men were more likely to have engaged in a broader range of sexual activities, including receptive anal intercourse.10,12

Seniors are less likely than younger people to talk about their sex lives or drug use with their physicians, and physicians tend not to ask older patients about these activities.2 Older adults often mistake the symptoms of HIV/AIDS for the aches and pains of normal aging, so they are less likely to get tested.2 The clinician faces challenges such as distinguishing among those conditions that are age related, those that are HIV related, those that are not distinguishable, and those related to both.10,13 Symptoms like shortness of breath, fatigue, chronic pain, and weight loss are often associated with HIV disease.10 While physiologic differences among age groups contribute to STD susceptibility (i.e., two-thirds of STD cases occur in teens and those in their twenties), aging is associated with physiologic changes that increase the risk of any infec­ tion, including STDs.3,11 Compared with younger people, the aging adult may be at higher risk for progression to AIDS according to some research; this is certainly the case for seniors with low T-cell counts.10 Overall, there is an abundance of evidence supporting the need for transmission prevention in seniors.

Risk Factors
The single greatest risk factor for STDs is number of sexual partners: the greater the number of sexual partners, the greater the risk of being exposed to a STD.14 Factors placing seniors particularly at risk for STDs and HIV/AIDS are given in TABLE 3. The fact that seniors are one-sixth less likely to use condoms than people in their twenties underscores the risk factor of unprotected sex in this population.11 Sexual preference plays an important role in the transmission of STDs as well. Disproportionately greater rates of STDs occur in men having sex with men (MSM) with respect to multiple partners and unprotected anal-genital, oral-genital, and oral-anal intercourse.4,14 The literature has revealed senior women in particular seem to be uninformed about the transmission and risks of HIV.10 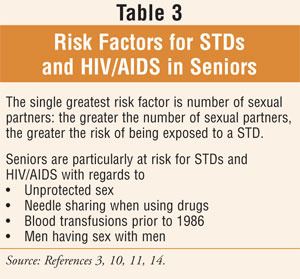 Screening
Screening for STDs is an essential part of health care for sexually active men and women.15,16 Furthermore, omitting seniors from the screening process increases the risk that by the time seniors are diagnosed with HIV/AIDS, the virus may be in the late stages.2 Recently, federal officials noted that many cases of STDs (e.g., syphilis, gonorrhea, chlamydia) are escaping detection because MSM are not being tested each year as advised.15,16 Evidence from CDC research shows that among MSM who showed no symptoms of gonorrhea, rectal infections (more than one-third) and throat infections (more than one-quarter) were missed since many individuals were not tested at all anatomical sites of recent exposure.15 Up-to-date screening guidelines that include recommendations for the screening of sexual partners are available online.16

Sexually active persons can reduce risk of transmitting and acquiring STDs and HIV/AIDS by: 1) adopting safer sexual behaviors; 2) using male/female condoms (latex or polyurethane); 3) having partners tested for HIV; and 4) avoiding sharing needles or any other equipment used to inject drugs.10,11,14 Testing should be done if a senior or partner had a blood transfusion between 1978 and 1985 and/or has had an operation or blood transfusion in a developing country at any time.10 An overview of measures for the prevention and control of STDs and HIV/AIDS can be found in TABLE 4.

Treatment Update
Most STDs are easily cured with antibiotics, except for viral STDs (e.g., genital herpes, HPV, HIV), which are symptomatically treated by palliative and suppressive therapy.4,16 Current recommendations for HIV treatment advocate a minimum of three antiretroviral agents (e.g., two nucleoside analogues with either a protease inhibitor [usually enhanced with ritonavir] or a nonnucleoside) referred to as highly active antiretroviral therapy (HAART).16,17 The goal is to use potent combinations of antiretroviral agents to maximally inhibit viral replication and restore immune function.3,17 Drug–drug interactions with HIV antiretroviral therapy may be found in Reference 18.

The CDC no longer recommends the use of fluoroquinolones for the treatment of gonococcal infections and associated conditions such as pelvic inflammatory disease.3,16,18 Consequently, only one class of drugs, the cephalosporins, is still recommended for the treatment of gonorrhea.3,16,19 The third-generation cephalosporin, ceftriaxone 125 mg IM in a single dose, is the preferred regimen according to the CDC for all types of uncomplicated gonococcal infection (i.e., genital, anal, pharyngeal).16 In geriatric patients, no dosage adjustment is required for renal impairment.20 Nonadherence to multiple-dose regimens results in treatment failures for most STDs; single-dose therapies when appropriate may improve patient adherence.3 Although it is beyond the scope of this article to discuss the pharmacologic treatment of STDs and HIV/AIDS in detail, the reader is encouraged to refer to Reference 16 for CDC's online STD Treatment Guidelines, which includes alternative regimens and recommendations for the treatment of sexual partners. Pharmacists should make recommendations for renal and hepatic dosing when appropriate for safe and effective treatment and optimal therapeutic outcomes.

Sexual activity and the potential for STDs continue into late life. Sexual dysfunction is associated with poor health and may adversely affect adherence to necessary medication. A confluence of factors, including changes in demographics and social norms, and HAART extending lives, requires increased attention to the impact of STDs and HIV/AIDS among seniors.2,10 Pharmacists should raise awareness and promote the appropriate screening, treatment, and prevention of STDs in this vulnerable population. There is a current and future role for pharmacists in recognizing and preventing drug interactions in seniors with HIV/AIDS and providing recommendations to health care providers regarding the most current guidelines for the treatment and management of STDs.