Sickle cell disease (SCD) is an all-encompassing term used to describe multiple hemoglobinopathy genotypes, including sickle cell anemia (SCA), sickle-hemoglobin C disease, and beta-thalassemia. The sickle cell trait is passed between generations in an autosomal recessive process. Those individuals who are heterozygous for this trait are considered carriers and normally will not show any clinical manifestations of the disease, while those that are homozygous for the trait have SCA.

Etiology
Sickle cell disease was first described by a Chicago physician named James Herrick in 1910. 4,5 It was not until 1945 that the disease process was hypothesized as a consequence of a hemoglobin abnormality.5 Normal hemoglobin (Hb-A) is composed of two alpha and two beta globin chains.6 Sickle hemoglobin (Hb-S) varies from Hb-A by a single amino acid mutation substitution between valine and glutamic acid in the sixth position on the beta globin chains.4

Pathophysiology
When deoxygenation (decreased O2 tension) occurs, the hemoglobin molecule undergoes rearrangement secondary to the amino acid substitution. The red blood cell becomes elongated, rigid, and curved on the ends, resembling a sickle shape. 7 Abnormalities within the red blood cells are not limited to the hemoglobin; intracellular potassium is rapidly decreased, and abnormalities exist in cellular membrane phosphorylation as well as in the calcium pump. 4 These abnormalities can lead to dehydration within the cell and increased membrane calcium levels, leaving the cell in an irreversible sickle shape.8

Diagnosis
Although the disease does not present clinically until four or five months after birth, the Hb-S is present in the blood stream at birth. Umbilical cord blood samples can undergo electrophoresis; for diagnosis of SCA the sample must be homozygous for Hb-S. All babies from ethnic groups at high risk for SCA should be screened for the disease at birth, because this has shown to decrease mortality of very young children when the diagnosis is confirmed.4 Other tests can be performed for diagnosis; however, these do not differentiate between the genotypes mentioned earlier.

Clinical Presentation
Infants have a large percentage of fetal hemoglobin (Hb-F). Hb-F has a higher affinity for oxygen compared to Hb-A and sickles less than Hb-S.8 With a low propensity to sickle, increased levels of Hb-F have been shown to improve the clinical course of the disease. As the infant's red blood cells begin to turn over, Hb-S replace the Hb-F. The classic signs of SCA are red blood cell destruction (hemolysis) and episodic vaso-occlusive crises. Hemolysis causes the sickle red blood cell to have a decreased lifespan of four to 20 days, while that of a normal red blood cell is 120 days.1 Sickle cells can occlude the vasculature, ultimately leading to chronic organ damage ( TABLE 1). 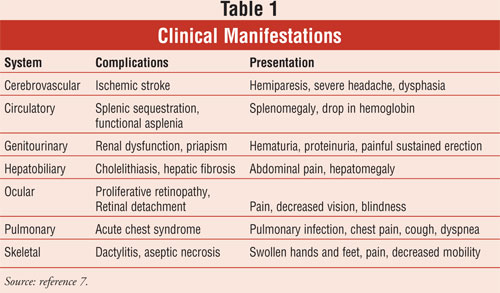 Clinical Manifestations
Vaso-occlusive crises are complex in nature, resulting from interactions between endothelium, plasma factors, leukocytes, and sickle cells.4 These complex interactions result in tissue hypoxia, tissue death, and pain. Vaso-occlusive episodes are the hallmark of SCA and occurrences range from daily to yearly. The most common sites for vaso-occlusive crises are the skeletal, pulmonary, and digestive systems, and a primary concern is resulting chronic organ damage. By age 50 nearly half of patients with SCA are diagnosed, with at least one chronic organ failure syndrome.9 Close monitoring and follow-up of pulmonary, renal, and cardiovascular systems by a multidisciplinary health care team are necessary to help slow the progression of chronic organ damage. The following sections will discuss the common clinical manifestations of SCA in the general population.

Cerebrovascular: Stroke is one of the most devastating consequences of SCA, particularly in childhood. By age 20, 11% of individuals with SCA will have suffered a stroke. 10 The Stroke Prevention Trial in Sickle Cell Anemia (STOP) was a randomized study to determine the benefit of chronic red blood cell transfusions in prevention of first stroke in high-risk children identified as those with abnormal transcranial Doppler (TCD) velocities, the gold standard for determining risk.10,11 First stroke was reduced by 92% in the chronic transfusion group, and the study was terminated prematurely secondary to the significant benefit. In response to this study, a clinical alert was sent out recommending that all children with abnormal TCD velocities receive chronic transfusion therapy for primary prophylaxis of stroke. It is now recommended that children 2 years and older undergo annual TCD screening in addition to close monitoring by health care providers for any changes noted in neurocognitive function.3

Circulatory: Tissue hypoxia in the spleen presents as abdominal pain and is so common that by age 8 the spleen shrinks in size secondary to scarring (autosplenectomy). 4 The primary concern with this condition is the resulting immune dysfunction and increased risk of infection, particularly from encapsulated organisms, such as Streptococcus pneumoniae, Haemophilus influenza .3 Decreased mortality in young children resulted from the use of prophylactic penicillin to the age of 59 months (TABLE 2).3,4 Immunizations are also an important component to preventing infections. In addition to the other required vaccines, children with SCA should also receive the pneumococcal vaccine.6 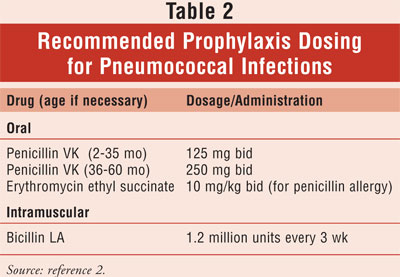 Treatment
Pain Management:Pain in patients with SCA has been difficult to manage because there is no objective measurement parameter. Through the years, management has improved with the advances of day centers for pain crises and a better understanding of the disease process. Pain management is unique to each patient and requires specific tailoring to previous successes and failures. A list of commonly used oral analgesics is shown in TABLE 3. The biggest barrier to properly controlling pain is the fear of addiction. Discussing the difference between physical dependence, opioid tolerance, and addiction is therefore paramount. Implementing a self-reporting pain log is one way to assess a patient's pain and the efficacy of their current management. 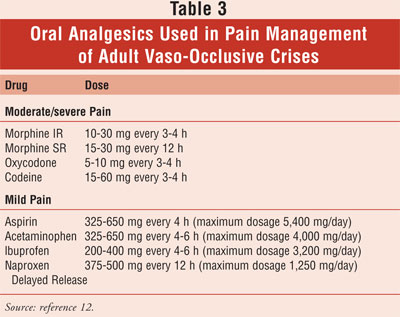 Transfusions do not come without risks, most commonly iron overload, infection, and alloimmunization. Alloimmunization occurs when the recipient produces alloantibodies, making future donor matching and transfusions more difficult.2 Therefore, benefits of therapy must outweigh the risks. Prior to transfusing, sickle-negative donor blood is phenotypically matched and leukocyte reduced (to avoid febrile reactions).2 Two different types of transfusions exist, simple and exchange. Simple transfusions deliver additional units of blood without removal of sickle cells. This can increase blood viscosity and is best reserved for when the hemoglobin level is less than 8 g/dL. Exchange transfusions are more complicated and involve removing sickle cells and replacing them with normal cells. This can be done manually or via automated red cell exchange and is associated with decreased incidence of iron overload and number of sickle cells.2,3 Exchange transfusions are warranted if the hemoglobin level is high because it is not associated with an increase in blood viscosity.

Iron overload (hemosiderosis) is the major concern with chronic transfusion therapy and can lead to endocrine failure, cirrhosis, and cardiomyopathy. Although serum ferritin levels are an accurate source of iron stores, they are not accurate for assessing iron overload. Iron overload is caused from an increased absorption of iron over an extended period of time and leads to insoluble iron depositing in the visceral tissues. Iron overload symptoms do not present until endocrinopathies and/or cardiac failure exists.13 To properly assess iron overload, the iron dry weight from liver biopsy should be used, with 7 mg/g dry weight as a determinant for chelation therapy.2

Chelation therapy has been a leading cause in decrease in quality of life for SCA patients. Until the recent approval of an oral chelating agent, patients suffered from multiple injections, lost days from work, pain, and sleep disturbances from administration pumps.13 Available chelating agents are summarized in TABLE 4. Monitoring of CBC counts and renal function are recommended at baseline and throughout treatment with deferasirox, whereas with deferoxamine therapy, auditory and ophthalmologic exams should be monitored regularly.14

Hydroxyurea: Hydroxyurea is a ribonuclease reductase inhibitor used in patients with SCA to decrease vaso-occlusive episodes. Although its exact mechanism of action is not known, it has shown to decrease the risk of sickling by increasing Hb-F and red cell deformability, decreasing white blood cell counts, and altering adhesive receptors on sickle reticulocytes and endothelium.1,5,15 The Multicenter Study of Hydroxyurea in Sickle Cell Anemia (MSH) demonstrated that over 2.5 years, hydroxyurea reduced the morbidity of adult patients with SCA by reducing the incidence of painful crises and ACS episodes by almost half.15

Hydroxyurea is useful in its ability to increase patients' quality of life and decrease morbidity. Many factors need to be considered and evaluated prior to and during therapy ( TABLE 5). However, without the ability to retard the progression of chronic organ damage, it is not the answer to sickle cell anemia. 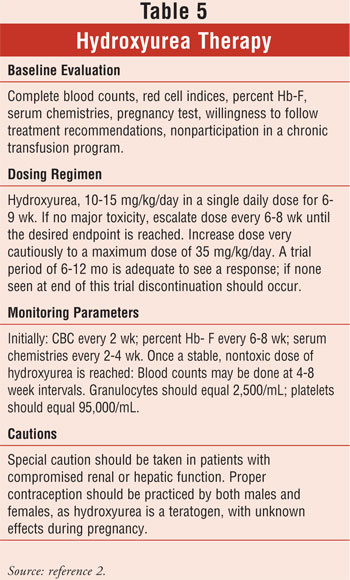 Future Therapy Options
Butyrate is a short-chain fatty acid that inhibits histone deactylase (HDAC) and increased Hb-F production in animal models. Arginine butyrate, when administered to patients (four days every four weeks), resulted in an induction of Hb-F in a majority of patients. However, the large volume of drug needed and the need for central catheters makes this drug difficult to administer. An oral dosage form alternative is needed.5

Decitabine is an analog of 5-azacytidine (initial Hb-F inducer) that does not incorporate into RNA, diminishing fears of carcinogenicity seen with 5-azacytidine. Small studies have been performed with encouraging results. All patients who received decitabine experienced Hb-F induction, regardless of previous hydroxyurea use. Larger scale studies are needed to examine the full potential and safety of this agent.5

Bone marrow transplantation is the only curative therapy for SCA. It replaces the source of sickle cell production and replaces it with bone marrow that produces normal cells. The procedure is not without its risks; there is a 20% mortality associated with the procedure. The inability to find a matched sibling donor has also limited its use in treating SCA. Current research is evaluating the use of cord blood transplantation as a means of increasing the amount of available stem cells for transplantation.5

Sickle cell anemia is a disease that currently is treated with supportive care, as no readily available cure exists. The care of patients with SCA needs to be handled by a multidisciplinary health care team, including pharmacists. Patients and their caretakers have access to pharmacists on at least a monthly basis and often need support in their challenging care plans. Pharmacists often serve as a conduit for continuity of care between patients and their health care providers. As drug experts, pharmacists can also lend their knowledge to the complicated pain management and antibiotic regimens.