Iron deficiency, the most common nutritional deficiency worldwide, varies in prevalence according to age, race, and sex (Table 1).1,2 According to data from the National Health and Nutrition Examination Survey (NHANES 1999–2000), iron deficiency is most prevalent among young children ages 1 to 2 years and adolescents and adult females ages 12 to 49 years.1 Iron deficiency may have potentially harmful effects in children, such as developmental delays and behavioral disturbances. In pregnant women, it increases the risk of preterm labor and low-birth-weight babies. 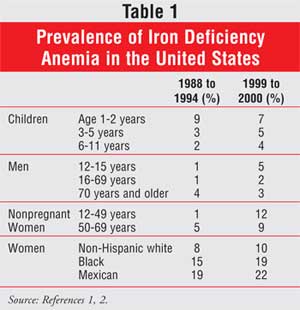 Anemia is a condition characterized by abnormally low levels of healthy red blood cells or hemoglobin (the component of red blood cells that delivers oxygen to tissues throughout the body).3 A reduction in the amount of circulating hemoglobin decreases the oxygen-carrying capacity of the blood. However, few clinical symptoms may be present before hemoglobin levels fall below 7 to 8 g/dL.4 Patients with anemia may experience symptoms such as tiredness, shortness of breath on exertion, cold intolerance, pallor of the skin, ringing in the ears, dizziness, and confusion. To prevent iron deficiency, at risk adults should consume iron-rich foods, and infants should be administered iron-fortified formula.

Screening Methods
Anemia is not a diagnosis but a symptom of underlying pathological conditions that requires further investigation to determine its etiology. It can not be appropriately diagnosed by clinical presentation alone. In clinical practice, anemia is most often recognized by measurement of the red blood cell count, hemoglobin concentration, and hematocrit. Until recently, laboratory tests for hemoglobin were available exclusively through physician visits.

The BIOSAFE Anemia Meter
The BIOSAFEAnemia Meter is the first FDA-approved, hand-held device that can be conveniently used at home to test hemoglobin levels (Figure 1). Low levels of hemoglobin may indicate anemia.5 Thus, the Anemia Meter may be used as an additional screening method. It is not recommended for use in patients younger than 18. 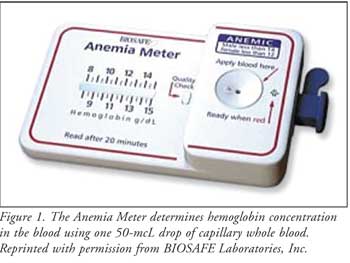 The device requires one 50-mcL drop of capillary whole blood, of which 15 mcL is used to determine hemoglobin concentration.6 After blood is collected, end point results are rapidly seen within 20 minutes. Results are stored for one month, affording patients an opportunity to talk with a health care professional about their results. It is important to note that this device is not intended to replace physician visits. Confirmation by professional laboratory methods is required for results that are less than 8 g/dL or greater than 15 g/dL. Additionally, if the test results do not indicate the possibility of anemia, patients should follow-up with their doctor. Patient instructions are provided in Table 2 . 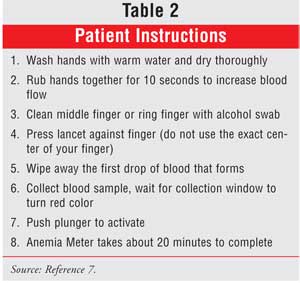 Clinical Efficacy
In a double-blind clinical trial, 224 volunteer participants self-collected capillary whole blood samples and tested for hemoglobin using the Anemia Meter. Paired venous samples were obtained and analyzed for hemoglobin using the Abbott Cell Dyn Hematology Analyzer.6 The range of hemoglobin values used was 5.9 to 18.2 g/dL. For females, the analytical specificity and accuracy was 98.9% and 97.1%, respectively. For males, the analytical specificity and accuracy was shown to be 96.3% and 95.9%, respectively. It was concluded that the Anemia Meter is more than 95% accurate and 96% specific when used correctly by patients.

A side-by-side testing between volunteers and medical professionals concluded that by following the instructions in the package insert, untrained users could obtain hemoglobin levels as accurate as those taken by professionals.6 Reliability was tested by measuring the same blood sample multiple times under the same conditions on five different devices. The aforementioned blood sample was then tested on four different days. Variations were shown to be less than 6% for both precision studies.

Conclusion
Although the prevalence of iron deficiency anemia appears to be less common in the United States than in developing countries, it remains above the Healthy People 2010 objectives of 5%, 1%, and 7% for toddlers, preschool children, and females ages 12 to 49 years, respectively.2 For this reason, continued monitoring of the iron status of the U.S. population is necessary in vulnerable patients. The Anemia Meter offers an accurate, simple and convenient method of monitoring hemoglobin levels, a key indicator of anemia. For more information, visit the BIOSAFE Web site at www.ebiosafe.com or call (800) 200-TEST (8378).