Pregnancy has been identified as a condition prone to thrombosis and embolism, although there is limited published information regarding treatment options for thrombosis in pregnant women.1 Pregnancy could be considered as the initiation of a hypercoagulable state that lasts for a period of 11 months--10 months of pregnancy and one month postpartum.2 Due to the physiologic changes that occur in pregnancy, the coagulation cascade's response is altered in order to minimize blood loss during gestation and delivery. While hemorrhage and embolism are common causes of death in pregnancy, venous thromboembolism is a leading cause of maternal deaths. 3,4 Compared to nonpregnant women, the risk of venous thromboembolism during pregnancy and after delivery is increased about fivefold.5 Thromboembolic complications in the United States occur in about 1 in 1,000 pregnancies and in approximately 1 in 5,000 deliveries.4-6

Etiology of Thrombosis in Pregnancy
Increased levels of estrogen and certain coagulation factors are key components in the development of a hypercoaguable state during pregnancy.4 These elements can lead to venous distension, potentially resulting in venous stasis, and increased levels of coagulation factors with a subsequent increased rate of activity.7 These mechanisms are thought to be the cause of the higher rates of deep vein thrombosis (DVT), pulmonary embolism (PE), stroke, and thrombosis of cardiac valvular prosthesis in pregnancy.8-10 Untreated DVT may result in PE in up to 24% of pregnant patients, with an associated mortality rate of approximately 15%.4 In addition, pregnancy has been shown to cause a significant decrease in the production of natural anticoagulant protein S and an increase in the development of acquired activated protein C resistance.7,11

There are three components, known as Virchow's triad (VT), that can lead to the formation of a thrombus: blood vessels, circulating elements in the blood, and the speed of blood flow.12 An irregularity of any component of the VT may cause thrombosis and embolism, which can reduce blood flow to critical organs.1

Mechanisms and Adverse Effects of Thrombolytic Therapy
Contraindications to the use of thrombolytic agents in pregnancy is relative to the patient, and consideration of the benefits versus the risks of treatment is an important step prior to administration. All thrombolytic agents work by activating plasminogen, which ultimately results in the degradation of fibrin clots. The human fibrinolytic system stimulates the release of tissue plasminogen activator from endothelial cells in response to various signals or injuries. Tissue plasminogen activator binds to plasminogen within the clot and converts to plasmin. The enzyme plasmin (a nonspecific protease) digests fibrin (protein that forms a "mesh") clots and several coagulation factors. The human fibrinolytic system is regulated in such a way that unwanted fibrin clots are removed from circulation while simultaneously leaving desired fibrin in wounds intact to maintain hemostasis.1,12,13 Therefore, clot dissolution is known as a product of fibrin degradation. Plasminogen and plasmin bind to fibrin at binding sites located near the amino termini that are located in the lysine residues. The lysine residues are also a site for alpha-2-antiplasmin, which covalently binds to fibrin, thereby protecting it from premature lysis. When plasminogen activators are administered for thrombolytic therapy, massive fibrinolysis is initiated and the inhibitory controls are overwhelmed.13 Exogenously administered thrombolytic agents not only dissolve the pathological thrombi but also dissolve the surrounding fibrin deposits at the site of injury.

Thus, the major side effect of thrombolytic administration is hemorrhage.12 The use of thrombolytics may cause several complications. Major adverse events include life-threatening hemorrhage (i.e., uterine and postpartum), intracranial hemorrhage, and incomplete clot dissolution that may lead to embolization. 12,13

The ideal thrombolytic agent would induce local pathological clot dissolution without producing systemic fibrinolysis or disrupting physiologic thrombi necessary for normal hemostatic balance.14 Since there is no ideal thrombolytic agent, a variety of adjunctive therapies (e.g., aspirin, clopidogrel, and heparin) are required to achieve all of the hemostatic goals.14 Because aspirin and clopidogrel are not indicated for use in pregnant patients, heparin or low-molecular-weight heparin are the only options for thrombus prophylaxis. 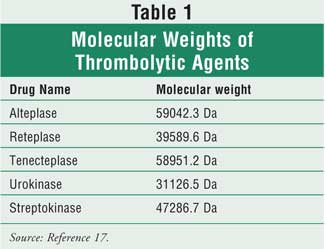 Diagnosis of Clotting Disorders During Pregnancy
Early diagnosis of clotting disorders is important to prevent complications. Most diagnostic procedures have excluded pregnant women; therefore, it is difficult to formulate an evidence-based recommendation.

DVT begins in the calf or in the ileofemoral segment, with a tendency to occur in the left leg due to compression of the iliac vein by the gravid uterus (uterus containing a developing fetus). Noninvasive studies, such as impedance plethysmography (the measurement of blood volume changes) and ultrasonography, are recommended as initial diagnostic tools for clots in pregnancy. However, if isolated iliac vein thrombosis is suspected and if the veins cannot be identified by ultrasonography or venography, a more complex and invasive procedure could be considered.18

PE can be difficult to diagnose, especially in pregnant women. Symptoms of PE should be interpreted with caution during pregnancy because dyspnea, tachypnea, and chest discomfort are already common. Electrocardiogram, chest radiographs, and arterial blood gas may support a PE diagnosis. In addition, a lung scan, also known as a ventilation perfusion scan, is the primary screening tool for the diagnosis in pregnant patients but exposes the fetus to radiation (although the amount has not been associated with significant risk of fetal injury). 18

Stroke, the loss of brain function due to interruption of blood supply, is a risk factor in pregnant patients. A pregnant woman experiences natural changes from an elevation in blood pressure and stress on the heart, which increases the risk of stroke. Common clinical presentations of stroke symptoms include headache, focal neurologic deficit, seizures, and visual changes. Clinicians should perform a neurologic examination, a funduscopic examination to assess intracranial pressure, as well as cardiovascular and skin examinations. In addition, tests such as CT and MRI may be performed.10 However, the use of MRI during the first trimester should be avoided.18 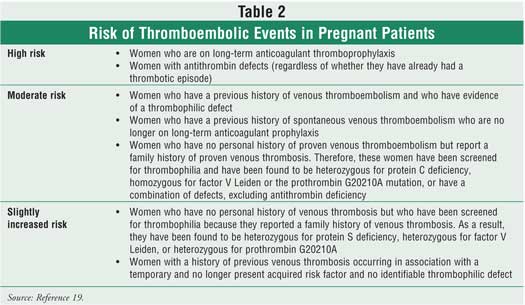 Case Reports
Since there are no existing randomized, controlled trials to evaluate the use of thrombolytics agents during pregnancy, cases reported in the literature will be reviewed.

In a case report by Yap et al., a 28-year-old woman in week 30 of her pregnancy who presented with PE received rt-PA 10 mg IV bolus, followed by 90 mg over two hours. The patient's hemodynamic status improved. A healthy baby boy was born by vaginal delivery at 36 weeks' gestation.20

In a report by Patel et al., a 36-year-old woman presented at 20 weeks' gestation with a five-day history of worsening breathlessness, chest pain, and palpitations. The diagnosis of massive PE was made, and rt-PA was administered at 10 mg bolus, followed by a 90 mg infusion over two hours. There was an improvement of blood pressure from 67/40 to 120/80 mmHg. After discontinuing thrombolytic therapy, she received unfractionated heparin for 48 hours, followed by low-molecular-weight heparin. The fetal outcome was not reported.21

In a case reported by Flobdorf et al., a 27-year-old pregnant woman at 31 weeks' gestation was admitted to the hospital with respiratory distress and tachypnea. She was diagnosed with massive PE. Initial treatment was urokinase, but this medication was switched to rt-PA 10 mg over four hours, followed by 2 mg over 1.5 hours. Forty-eight hours after thrombolysis, the patient delivered a healthy infant. Maternal outcomes were reported as stable.22

In another report by Ahearn et al., a 12-week pregnant, 36-year-old African-American woman presented with acute dyspnea and substernal chest pain in the emergency department. The patient was lethargic with a blood pressure of 82/50 mmHg and a pulse of 135 beats per minute. She was diagnosed with massive PE. The patient received 100 mg of rt-PA over two hours. Maternal outcomes were reported to be stable, and the patient delivered a full-term infant without complications.23

A case reported by Elford et al. describes a 28-year-old, newly gravid woman with a seven-year history of primary infertility and four unsuccessful cycles of ovulation induction. The patient presented with dysarthria, left facial paralysis, and drowsiness; she was diagnosed with a stroke that was confirmed by CT. The patient was administered 15.5 mg of intra-arterial rt-PA. Over a three-week period, the patient regained hematologic and neurologic stability. She delivered a healthy male infant at term by vaginal delivery.24

Murugappan et al. reported on eight pregnant women diagnosed with acute ischemic stroke who were treated with either rt-PA or urokinase. The average maternal age was 32 years and the mean gestational age was 11 weeks (range, 4-37 weeks). Etiologies of stroke were varied (e.g., discontinuation of anticoagulants in patients with mechanical heart valves, hypercoaguable states). Four women were treated with rt-PA, and the other four were treated with urokinase. One of the mothers died secondary to complications of angioplasty. This death was determined by the authors to not be caused solely by thrombolytic therapy. Of the mothers who survived, three elected to have therapeutic abortions, two miscarried within two to three days of urokinase administration, and two mothers delivered at term without any complications (one received rt-PA and the other received urokinase).25

A 27-year-old pregnant woman in her first trimester was hospitalized due to pregnancy complications for three weeks. Her clinical condition deteriorated and she developed shock, followed by cardiac arrest. The diagnosis was consistent with acute PE, and the patient received streptokinase. This treatment was complicated by massive bleeding due to the rupture of the uterus. She underwent hysterectomy and recovered thereafter. No further information was provided on the patient's condition.26

Role of the Pharmacist
As the pathophysiology of thrombus formation becomes increasingly understood, new therapeutic options have emerged and the role of existing pharmacotherapeutic agents has expanded. Each thrombolytic agent has its own specific dosing regimen, typically based on the clotting disorder being treated. Pharmacists can have an integral role in drug selection based on patient-specific parameters. In addition, therapeutic monitoring is essential for adequate and sustained patient care in order to avoid adverse effects. This includes monitoring for any sign of bleeding, allergic reactions, and in some instances, improvement for clinical outcomes. Through close patient interaction and attention to specific symptoms, pharmacists can help patients avoid potential complications and achieve appropriate goals.

Conclusion
The majority of cases presented in this article resulted in encouraging outcomes. In one case, the use of hormones for fertility was thought to be the cause of thrombus formation. This substantiates the documented risk of hormone use in the development of thromboembolic events and illustrates the need for pharmacists to be aware of the increased risk of thrombosis in women who use fertility agents.7,13 In terms of maternal mortality, all cases presented positive outcomes. Regarding fetal outcomes, one case did not report the outcome, while most of the remaining cases reported positive fetal outcomes. It is interesting to note that rt-PA was the drug of choice to treat a pregnant patient in the cases reported. The reason for this decision could be that rt-PA has the least potential to cause antigenicity and has the largest molecular weight in comparison to all the other thrombolytic agents.14

Generally, the use of thrombolytic therapy during pregnancy cannot be recommended until further safety and efficacy data are available. However, based on the cases assessed in this article, it appears that the use of a thrombolytic agent, particularly rt-PA, may be an effective therapeutic option for pregnant women who present with life-threatening blood clots.