In 1998, the FDA issued regulations requiring the addition of folic acid to cereals, enriched breads, flour, cornmeal, rice, pasta, and other cereal-grain products. Such fortification allows most people to achieve the recommended daily allowance (RDA) of folate equivalents that satisfies the nutritional requirements of 97% of healthy individuals.

Folate deficiency is clinically evidenced when the need for additional folate inherent in certain health conditions is not met. Such conditions include pregnancy, lactation, malabsorption, alcohol abuse, kidney dialysis, liver disease, and some types of anemia. Deficiency can also occur due to failure to consume the RDA, increased excretion of folate, or interference with folate metabolism by certain medications. Folate deficiency during pregnancy increases the risk of premature delivery, low birthweight, and neural-tube birth defects.

Women of childbearing age can get 100% of the RDA for folate by consuming foods like ready-to-eat cereals. Because of the availability of a large array of fortified foods and the possibility of increased risk of adverse events due to excessive folate consumption, the Institute of Medicine has established the upper intake level of supplemental folic acid for adults to be a maximum of 1,000 mcg per day. 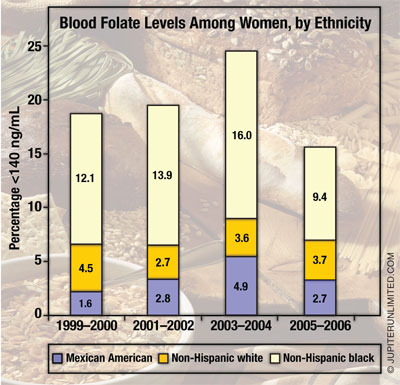