Along with the elderly population's growth in numbers, there has been an increase in the number of tuberculosis (TB) cases among seniors.1 While TB is preventable and curable, approximately 1.5 million people died from it in 2006 according to the World Health Organization (WHO).2 In addition, another 200,000 people died from HIV-associated TB.2 In the United States alone, a total of 13,293 TB cases were reported in 2007.3 As a result of the growth of TB-control programs nationwide, there has been a decline in the overall number of reported TB cases in the U.S. within the last 10 years.4 In fact, the TB incidence rate in 2007 was the lowest recorded since national reporting began in 1953.3 Despite these declines, however, the elderly continue to account for a disproportionate share of the cases.4

If TB--an airborne infectious disease--is diagnosed early and completely treated, patients with the disease quickly become noninfectious and eventually cured.2 In elderly patients, many clinical features of TB are subtle or absent, making diagnosis difficult; the high number of cases diagnosed at autopsy among the elderly suggests that TB frequently remains unrecognized.1,4 Compared with younger individuals, the mortality rate of TB in seniors is six times higher.5  Pharmacists should take note that TB is a preventable cause of death in seniors and should not be overlooked.5 The authors of one recent study suggested that an "increased awareness in disease recognition and better medical and social support are needed in addressing the problem of tuberculosis in older people." 1

Approximately three-quarters of all TB cases in seniors occur in the respiratory tract.6 Extrapulmonary sites (TABLE 1) are common and include the bones and joints (particularly the spine), and the genitourinary tract. A form of disseminated TB, called miliary TB, is also relatively common in seniors.6 According to WHO, major challenges associated with this condition are multidrug-resistant TB (MDR-TB) and extensively drug-resistant TB (XDR-TB), HIV-associated TB, and weak health systems.2 Further challenges in the struggle against TB are faced by the WHO European Region: 1) the high rate of multidrug–resistant TB (MDR-TB), mostly in the countries of the former Soviet Union; 2) the rapid growth of the HIV epidemic in eastern Europe and central Asia and, as a consequence, the sharp increase in HIV-related TB; 3) the need to reform the health sector, to include closer involvement of primary health care in TB control; 4) the still-limited political and financial commitment to TB control; and 5) lack of advocacy, communication, and social mobilization.7 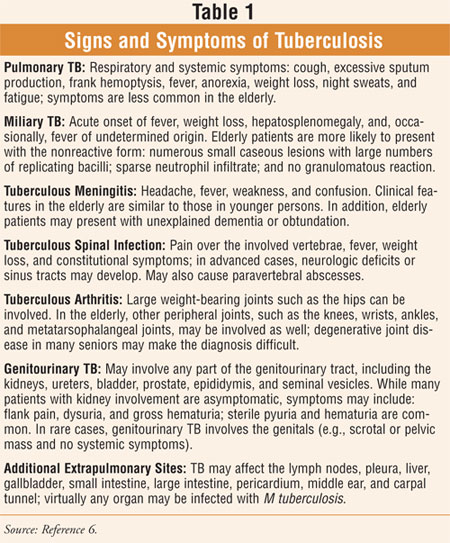 TB Infection Versus TB Disease
TB infection is the term used to describe individuals who have contained the primary infection and who remain asymptomatic with a positive tuberculin skin test. 6 Persons who have symptoms of infection are noted to have TB disease. 6 In 30% to 50% of cases, persistent TB infection is present without disease.6 A loss of cellular immune reactivity (i.e., negative tuberculin skin test) to Mycobacterium tuberculosis occurs in some seniors who were previously infected with this organism, thereby rendering them vulnerable to reinfection.6

In an attempt to adhere to the national objective of elimination of this potentially curable disease, experts recommend an aggressive approach to diagnosis, treatment, and prevention of TB in the elderly.8 It has been reported that TB prophylaxis is frequently withheld even when indicated, due to concern that elderly persons are at greater risk for hepatic toxicity from TB treatment.4,8 Pharmacists can be assured, however, that the poor outcome of untreated TB in this age-group warrants more aggressive treatment of the condition and that through careful monitoring of seniors for adverse drug effects, successful treatment may be achieved.4

Those individuals at risk for TB disease are outlined in TABLE 2. The most important known risk factor for progression from latent TB infection (LTBI) to TB disease is HIV. 3 The CDC recommends routine screening for HIV for all persons with TB or LTBI at the initiation of TB or LTBI treatment.3 The CDC continues to work to increase national and international awareness of TB-HIV coinfection and to improve the integration of TB-HIV health care services. 3 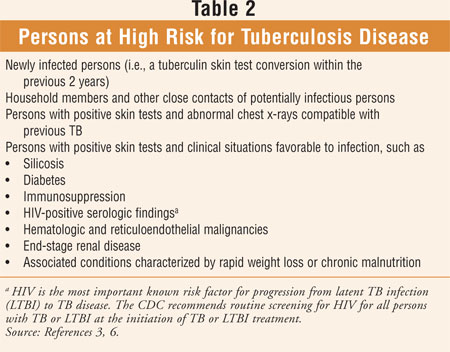 Signs and Symptoms
There is a major concern surrounding TB in seniors regarding failure to recognize or diagnose the disease.8 Classic features of TB, including cough, sputum production, frank hemoptysis, fever, night sweats, and weight loss, may not be exhibited in TB disease in the elderly (TABLE 1).5,6,8 Weight loss can occur; however, it is nonspecific.5 Clinical features in the elderly may include anorexia, chronic fatigue, low-grade fever (prolonged and unexplained), cognitive impairment, and changes in functional ability (e.g., activities of daily living).8 Compared to younger individuals, mental status changes are twice as common in seniors.5

Chest X-ray: Any lung segment can be involved by primary TB; lung involvement for reactivated TB usually includes the apical and posterior segments of the upper lobes and the superior segments of the lower lobes.6 In the elderly, infiltrates may be interstitial, lobar, patchy or cavitary, and bilateral.6

Laboratory Findings: Clinical specimens (e.g., sputum, urine) from suspected sites of TB are first examined by smear to detect acid-fast bacilli and are subsequently cultured for M tuberculosis .6 Serologic tests for antibody detection (i.e., against mycobacterial antigens) have not been adequately refined for routine clinical use.6

Treatment
An overview of the treatment of TB in the elderly is provided in TABLE 3. Since recommendations change due to resistant strains and newly developed information, consulting MMWR (www.cdc.gov/mmwr) for current CDC recommendations is advised.9 While the recommended treatment duration is often the same for HIV-negative and HIV-positive patients, some clinicians believe that the course of therapy should be extended for immunocompromised patients.5 Treatment is extended by these clinicians to nine months, rather than six months, to treat HIV-positive patients with drug-susceptible TB.5 All TB patients should remain under observation until adherence with their treatment regimen is established. 6 Although it is beyond the scope of this article to discuss the pharmacologic management of TB in detail, the interested reader is referred to Reference 6. 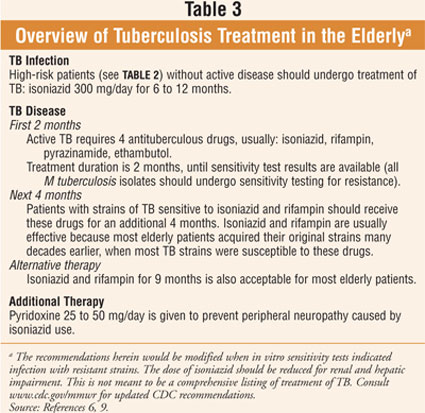 Monitoring
Monitoring with laboratory parameters includes baseline liver enzyme, bilirubin, and serum creatinine levels; a CBC; and a platelet count (or estimate).6 Monitoring of serum uric acid concentration is recommended when pyrazinamide is part of the regimen.6 Patients should be monitored monthly for symptoms of hepatitis (e.g., jaundice, fever, anorexia, dark urine, fatigue, weakness, nausea, vomiting), a common adverse effect of isoniazid more frequently seen in the elderly.6,9 During the first six months of treatment, especially when hepatitis is most likely to occur, testing liver function with aspartate transaminase is recommended.6 Isoniazid should be discontinued if transaminase levels increase five or more times higher than the upper limit of normal values.6 A U.S. Boxed Warning for isoniazid states: "Severe and sometimes fatal hepatitis may occur or develop even after many months of treatment."9 For patients with active disease, sputum should be examined at least monthly until cultures convert to negative; in approximately 90% of patients, cultures will convert within three months of commencement of the recommended regimen.6,9

Evidence suggests that institutionalized seniors are at a greater risk for reactivation of latent TB and for the acquisition of new TB infection compared with their community-dwelling counterparts.4 Patients in long-term care facilities and acute-care institutions should be under surveillance, control, and reporting for TB, according to CDC recommendations.6 Initial skin testing and subsequent annual testing should be performed on all new employees and new residents in long-term care facilities.6 The initial comprehensive assessment of all elderly patients should include the two-step purified protein derivative (PPD) screening.6 All persons who test tuberculin positive on admission to a long-term care facility should have a chest x-ray to ensure the absence of pulmonary infiltrates consistent with TB.6 Furthermore, a chest x-ray should be performed on anyone suspected of having TB.6