According to surveys by the Pharmaceutical Research and Manufacturers of America, older Americans have high hopes of more drugs being available in the near future. Challenged by the 70 million baby boomers reaching age 65, researchers are testing out more than 900 drugs for their ability to mitigate, treat, and/or cure ailments disproportionately affecting the aging population. 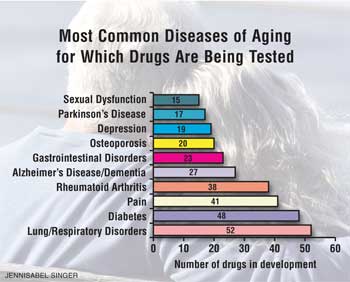 Chronic Obstructive Pulmonary Disease: COPD has the highest prevalence rate in people older than 65, with 59.3 per 1,000 whites and 49 per 1,000 African-Americans. COPD is an important cause of hospitalizations in older Americans; people older than 65 are four times as likely to be hospitalized for COPD than those 45 to 64 years old.

Diabetes: Although diabetes affects people of all ages, more than 8.6 million Americans 60 and older have diabetes. Nursing home care for people with diabetes has been estimated to cost in excess of $13.8 billion.

Pain: The leading complaint of older Americans is pain, with 20% taking painkillers regularly. Older Americans who take pain medication are likely to suffer from arthritis, bone and joint pain, and low back pain. Pain is also common among nursing home residents, with 45% to 80% suffering from substantial pain that is undertreated.

Parkinson's Disease: PD affects both men and women equally and usually develops after age 65. PD is estimated to cost up to $25 billion per year. As the disease progresses, substantial disability requires assisted living and nursing home care.