More Americans Seeking Medical Care
Data released by the Centers for Disease Control and Prevention (CDC) show that on average, each American seeks medical care at a doctor's office or a hospital emergency department about four times a year, an increase of 26% over the decade from 1996 to 2006. This translates to an estimated 1.1 billion visits to physicians' offices and hospital outpatient emergency departments in 2006. According to the CDC/National Center for Health Statistics National Health Care Survey, the increase outpaced the 11% growth in population during the same time period.

The data also uncovered that regardless of where the patient went for medical care, whether it was a physician's office, outpatient clinic, or emergency department, seven out of 10 left the medical visit with at least one prescription; analgesics were the most commonly prescribed drug category. Other facts showed that half of all physician office visits were made by patients with one or more chronic medical conditions, with hypertension heading the list, followed by arthritis, hyperlipidemia, and depression. At hospital emergency departments, the number of visits for treatment of chronic diabetes increased by 43% and visits for chronic hypertension increased by 51%. 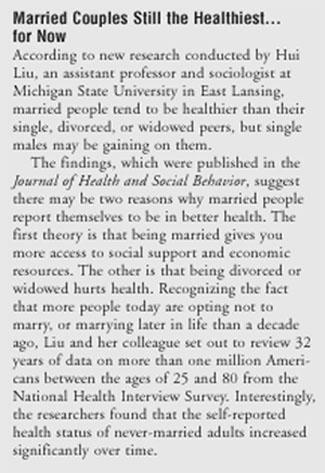 You May Not Be What You Eat
Contrary to popular belief that eating necessarily leads to increased body fat, a paper published by Kaveh Ashrafi, PhD, assistant professor of physiology at the University of California at San Francisco, suggests that the neurotransmitter serotonin, already known to control appetite and fat build-up, goes through two separate signaling channels. The one set of signals regulates feeding, and a separate set of signals regulates fat metabolism. The findings were uncovered by studying the roundworm, also known as Caenorhabditis elegans, which shares half of its genes with humans and is often studied as a predictor of human traits.

The researchers reported that the signaling pathways are actually composed of a series of molecular events triggered by neurons in the brain that "instruct" the body to burn or store fat. If investigators can find the "separate-channel" mechanism in humans, weight-loss drugs could be developed to attack just the fat-deposition channel rather than the hunger-dampening pathway, which has already been shown to limit success in diet adherence. According to Dr. Ashrafi's hypothesis, "serotonin's control of fat is distinct from feeding. A weight-loss strategy that focuses only on eating can only go so far. It may be one reason why diets fail."

Excuse Me, What Did You Say?
Data from the National Health and Nutrition Examination Survey found that an estimated 16% of adults (29 million) had speech-frequency hearing loss in 2003–2004. The findings were reported by Yuri Agrawal, MD, of Johns Hopkins and colleagues in Archives of Internal Medicine.

The study also uncovered that there were large demographic disparities among the patients studied. Whites, men, older participants, and the less educated all had substantially higher rates of hearing loss than other subgroups. The researchers concluded that prevention and screening should  begin in young adulthood and that "efforts should be intensified among white and Mexican-American men."