Diabetes is a major public health problem that affects 7% of the United States population, or 20.8 million people.1 Type 2 diabetes accounts for 90% to 95% of the diabetes population and is diagnosed with increasing frequency, especially in adolescents and children. Nearly one third of individuals with diabetes are unaware of their illness, which delays the time to treatment and increases the risk of complications. Also, the cost of diabetes is staggering, with over $100 billion per year spent on the treatment of people with this disease. Diabetes is the leading cause of adult blindness, nontraumatic amputations, and end-stage renal disease. In addition, the death rates associated with heart disease and the risk of stroke are about two- to fourfold higher in adults with diabetes. These macrovascular complications account for 65% of deaths in people with the disease.1 Studies have documented that maintaining glycemic levels as close to normal as possible helps to reduce diabetes-specific complication risks.2-4 Each percentage point reduction in hemoglobin A1C (HbA1c)--equal to a drop in average plasma glucose of about 40 mg/dL--reduces the risk of microvascular disease by 37%.4 These observations have led to intensification of glycemic targets. The American Diabetes Association currently recommends that each patient maintains glycemic levels as close to normal as possible (HbA1c <6%) and minimally below 7%.5
Pathophysiology
Normal physiological insulin secretion consists of a continuous basal secretion to control fasting and between-meal glucose and postprandial spikes in insulin to control meal-related hyperglycemia. Type 2 diabetes is characterized by insulin resistance and dysfunction in pancreatic beta- and alpha-cell function, resulting in increasing insulin deficiency and increased glucose levels.6 By diagnosis, pancreatic beta-cell function is only 50% that of a healthy, nondiabetic individual. Pancreatic beta-cell dysfunction in type 2 diabetes is progressive, which often necessitates insulin therapy as insulin levels wane. Several diabetes medications, including thiazolidinediones (TZDs) and incretin therapy, may slow the deterioration of pancreatic beta-cell function, but confirmatory data in humans is needed. Pathophysiologically, high fasting plasma glucose (FPG) levels result from excessive hepatic glucose production while postprandial glucose (PPG) levels are dependent upon multiple factors, including muscle insulin resistance, relative insulin deficiency, meal carbohydrate intake, and incretin deficiency.7 The contribution of the FPG to an HbA1c is greater when HbA1c levels are higher; however, as HbA1c values approach normal, PPG plays a greater role in determining HbA1c levels. 8

Many treatment options are now available to treat type 2 diabetes. Importantly, in the new treatment paradigm, insulin is no longer the "treatment of last resort" to be used after multiple oral antidiabetic agents (OADs), but rather, whenever insulin is needed to achieve target glycemic levels (goal-oriented therapy). This article provides pharmacists with an overview of recent developments and currently available insulin therapies in the management of type 2 diabetes.
Misconceptions About Insulin Therapy Insulin has greater glucose-lowering potential than any other current diabetes therapy, and the maximal dose is limited only by the potential for hypoglycemia. Insulin alleviates the glucotoxicity and lipotoxicity that occur with poorly controlled diabetes and may improve pancreatic beta-cell function in recently diagnosed patients with type 2 diabetes.6,9,10 Still, patients and their physicians are often reluctant to initiate insulin therapy because of concerns about hypoglycemia, weight gain, and injections. Both may view the start of insulin therapy as a failure to adhere to recommendations for lifestyle modifications and medications. This delays advancement to insulin therapy and can increase the risk of long-term complications. These barriers can be overcome with provider  and patient education--beginning at the time of diagnosis and reinforced when needed5,11-13 (TABLE 1). 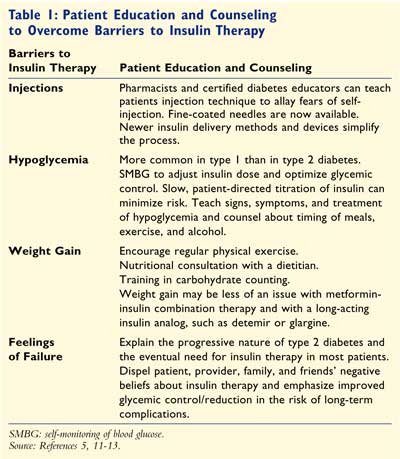 Patient Selection for Insulin Therapy Insulin therapy is indicated in patients with type 2 diabetes when they have symptomatic hyperglycemia (such as weight loss, dehydration, or extreme thirst), when they are pregnant, or when their glycemic control is poor despite current therapy.14,15 In newly diagnosed individuals, insulin may be initiated on a short-term basis to overcome high glucose levels (glucose toxicity), which severely reduces the amount of insulin the beta-cells can produce.14 Patients already taking OADs and with an HbA1c higher than 8.5% are candidates for insulin, as addition of another OAD or incretin-based therapy will likely reduce HbA1c by only 1% to 1.5%, failing to reach glycemic goals.16 Concurrent inpatient medical conditions such as myocardial infarction, stroke, infections, trauma, or surgery may necessitate short-term use of insulin in type 2 diabetes.17

Types of Insulin
The two main types of injectable insulins available are human insulins and insulin analogs. These are further divided based on their formulation, onset, and peak of action into rapid-acting, short-acting, intermediate-acting, long-acting, and premixed ( TABLE 2).18,19 The recently introduced inhaled human insulin (Exubera) has onset and peak characteristics similar to rapid-acting insulins and a duration of action similar to regular human insulin.20 It is recommended that pulmonary function tests be used to monitor patients on inhaled insulin at baseline, six months, and yearly thereafter.21 Smokers, individuals with pulmonary diseases, and patients with asthma are not candidates for this therapy.20 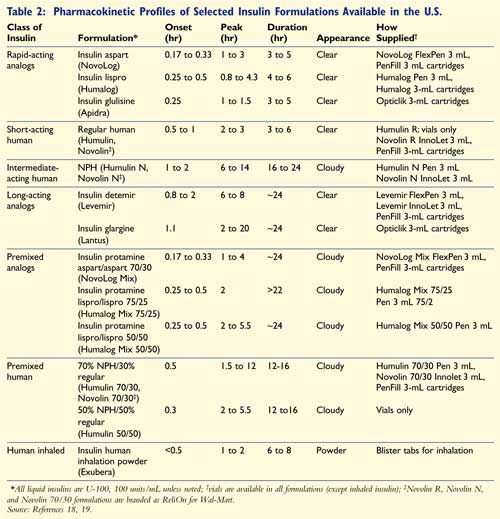 Insulin Analogs: Insulin analogs have been formulated to have advantages over human insulin formulations in pharmacokinetics, efficacy, safety, and/or convenience of dosing (FIGURE 1).22-26 Peak insulin action occurs more rapidly with rapid-acting insulin analogs and premixed insulin analogs when compared to regular insulin or premixed human insulin, respectively.9 The quicker onset of action allows more convenient dosing (i.e., within 15 minutes of a meal for analogs versus at least 30 minutes prior for regular insulin) and potentially offers better mealtime hyperglycemia control.9 The increased duration of effect (up to 24 hours) with the long-acting insulin analogs allows once-daily dosing in type 2 diabetes, and their time-action profiles are relatively flat when compared with neutral protamine Hagedorn (NPH) insulin, which has a definite peak and approximate 12-hour duration of action.24 Less within-patient variability ("wobble" of insulin levels between multiple injections) is reported with the insulin analogs than with human insulin.24 This may explain why long-acting analogs appear to cause less severe or nocturnal hypoglycemia.23,27 The full magnitude of the benefits of insulin analogs may become clearer as long-term safety and efficacy data become available.28 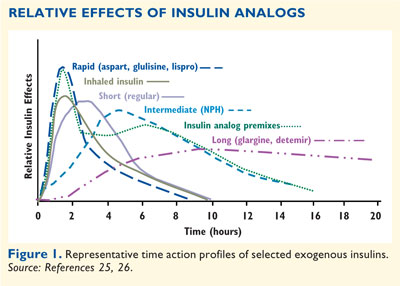 Algorithms for Insulin Therapy
Various professional associations have developed different algorithms for treating type 2 diabetes. The American College of Endocrinology and the American Association of Clinical Endocrinologists list insulin as the preferred treatment when the HbA1c is 10% or higher.5,29 In patients previously treated with OADs, insulin may be added whenever indicated, but especially if the HbA1c is greater than 8.5%. The Texas Diabetes Council Algorithm recommends insulin for treatment-naïve patients with a FPG of at least 260 mg/dL or an HbA1c of at least 10%. For patients on OADs and with an HbA1c of 8.5% or less, once-daily insulin is the treatment of choice, although if their HbA1c levels are above 8.5% a multidose insulin regimen is recommended.30

Insulin Regimens
The optimal insulin regimen for a patient allows them to reach glycemic goals, limits hypoglycemia, and fits their lifestyle. Factors to consider in tailoring an individual insulin regimen include current glycemic control, need for fasting and/or postprandial coverage, lifestyle requirements, concomitant disease states such as renal or liver disease, and the OADs that will be continued in their treatment regimen.9 Metformin and TZDs improve hepatic and peripheral insulin sensitivity and often result in a substantial reduction in the insulin dose necessary for glycemic control.22,31,32 Patients receiving both insulin and metformin gain less weight than patients on insulin alone or TZD plus insulin combination therapy.32 Patients who continue TZDs with insulin should be monitored for weight gain, peripheral edema, and increasing shortness of breath, all potentially limiting factors that may necessitate discontinuation of TZD use.22 Sulfonylureas or meglitinides may be continued at the time of initiation of once-daily basal regimens but should be discontinued with intensification of insulin therapy. 16 Many clinicians are successfully using exenatide or dipeptidyl peptidase-4 (DPP-4) inhibitors in combination with insulin, but neither is currently FDA approved for combination with insulin.

Initiating Insulin Therapy
Adding a basal or premixed insulin to OADs is the simplest way to start insulin therapy.9 In a 24-week trial, the once-daily insulin analog glargine had a similar efficacy to NPH insulin (both were in combination with OADs) in achieving targeted HbA1c levels. Nearly 60% of patients achieved target HbA1c levels of less than 7%, but 25% more patients treated with insulin glargine achieved the HbA1c goals without nocturnal hypoglycemia.27 A similar 26-week trial comparing insulin detemir with NPH as add-on therapy to OADs noted HbA1c levels of 7% or lower in 70% of all patients, although this was achieved without incidence of hypoglycemia in significantly more patients treated with insulin detemir compared to those treated with NPH (26% vs. 16%, respectively; P = .008).23 Additionally, patients using insulin detemir and OADs experienced significantly less weight gain, a 47% decrease in all hypoglycemia, and a 55% decrease in nocturnal hypoglycemia compared with patients using NPH insulin and OADs.23 A 52-week open-label trial in   diabetes  with type 2 diabetes who were poorly controlled on OADs compared the addition of insulin glargine daily or insulin detemir once or twice daily. Insulin detemir and insulin glargine resulted in similar A1C control and risk of overall and nocturnal hypoglycemia.33

Role of the Pharmacist Pharmacists are uniquely placed to provide education and diabetes management services, and many have implemented education- or diabetes-related sections in the pharmacy. Training to become a certified diabetes educator can further solidify and expand the pharmacist's role in diabetes care, especially through collaboration with other health care professionals. Diabetes medication management, sick-day guidelines, SMBG, American Diabetes Association–recommended treatment goals, and basic information in all aspects of diabetes self-management care can potentially be taught by pharmacists. Conclusion In order to prevent or delay the onset of diabetes-specific complications, the glycemic goal in the management of type 2 diabetes is to achieve near-normal HbA1c levels without hypoglycemia. Because type 2 diabetes is a progressive disease, multiple agents, including insulin, may be required to achieve targeted glycemic goals. Proper choice of the insulin regimen, based on patient factors, can increase the chances of successful implementation. Insulin analogs may help to achieve these goals by easily allowing patients to fit the insulin regimen into their lifestyles. Newer delivery devices and novel routes of administration may offer greater ease of use and precision in the dosing of insulin. The pharmacist, as a trusted source of drug information, should play a vital role in the care of patients with type 2 diabetes using insulin. References

16. Nathan DM, Buse JB, et al. Management of hyperglycemia in type 2 diabetes: a consensus algorithm for the initiation and adjustment of therapy. A consensus statement from the American Diabetes Association and the European Association for the Study of Diabetes. Diabetes Care. 2006;29:1963-1972.

31. Raskin P. Can glycemic targets be achieved--in particular with two daily injections of a mix of intermediate- and short-acting insulin? Endocr Pract. 2006;12(suppl 1):52-54.