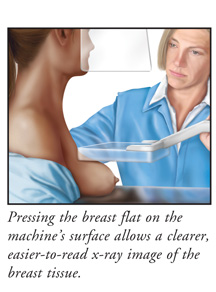 A mammogram is an x-ray that is used to detect abnormalities in breast tissue. Screening mammography is performed in healthy women to detect early signs of cancer, such as masses or calcium deposits in the breast tissue. Masses can be either benign or cancerous; calcium deposits could be an early indication that cancer cells are present. A screening mammogram involves two x-rays of each breast, usually performed every one or two years in women aged 40 or older, or even earlier in women with risk factors for breast cancer.

A diagnostic mammogram is performed in women who have abnormal symptoms such as breast pain, discharge from the nipple, lumps, or dimpled skin on the breast or nipple. Diagnostic mammography involves several x-rays from various views, with close-ups of the symptomatic area. This allows the radiologist to examine the area under suspicion more closely and determine whether a biopsy should be done to look for abnormal cells.

Mammography is a simple procedure that should be performed regularly as an important part of early cancer detection. Approximately one of every eight women in the United States will develop breast cancer during her lifetime, and the risk of breast cancer increases dramatically with age. Regular screening mammograms in women over age 40 have been proven to lower the number of deaths due to breast cancer. Although the mammogram is a relatively inexpensive test, some women may have difficulty paying for it if they are not covered by an insurance plan. There are many state- and employer-based programs that provide free or reduced-cost mammograms to low-income women in an effort to make this testing available to everyone.

A mammogram is an x-ray of the breast tissue. Film x-rays have been the standard mammogram medium for years, but some mammography centers are now using digital x-rays. Digital x-rays still use radiation, but the image is stored on a computer instead of on film. The digital image can be magnified for reading by the radiologist. Although there is no difference between the two methods other than storage, digital mammography may be more effective in women with dense breast tissue.

Your Doctor Should Perform A Breast Exam As Well

A mammogram is an x-ray of the breast tissue. Film x-rays have been the standard mammogram medium for years, but some mammography centers are now using digital x-rays. Digital x-rays still use radiation, but the image is stored on a computer instead of on film. The digital image can be magnified for reading by the radiologist. Although there is no difference between the two methods other than storage, digital mammography may be more effective in women with dense breast tissue.

On the day of the mammogram, refrain from using creams, deodorants, powders, and perfumes under the arms or near the breasts. The breast is positioned on the flat surface of a special x-ray machine and pressed flat by another flat surface before the x-ray is taken. Flattening the breast gives the radiologist a clearer image of the tissue. The pressure used to flatten the breast causes some women temporary discomfort, but most women do not find mammograms painful.

Since screening mammograms in women over age 40 have been proven to decrease breast cancer deaths, guidelines for mammogram testing usually include regular screening mammograms everyone or two years for healthy women aged 40 and older.Women who have a higher risk of breast cancer should ask their doctor when and how often they should be tested and whether a breast MRI is recommended to allow the radiologist to visualize the breast tissue even more clearly. Breast self-exams are recommended by most doctors, but they must be combined with regular mammograms and clinical exams since self-exams alone cannot be relied on to find the majority of breast cancers.

It is important for women who are pregnant or breast-feeding or who have breast implants to inform the technician performing the mammogram. Women who must have a mammogram while pregnant should wear a lead apron to protect the fetus from radiation. Women with breast implants should use a facility that has technicians experienced in performing mammograms on women with implants, since implants can hide some breast tissue on the x-ray.

Some abnormalities that may be found on a mammogram are masses (abnormal tissue growths that may or may not be cancerous); small areas of calcium deposits in the tissue (which may signal cancer cells nearby); atypical hyperplasia (a group of abnormal but noncancerous cells); and noninvasive cancers such as ductal carcinoma in situ (DCIS), or abnormal cells in the milk ducts, and lobular carcinoma in situ (LCIS), or abnormal cells in the lobules where milk is produced. In the case of DCIS and LCIS, these abnormal cells have not spread to the surrounding breast tissue. Abnormalities on a mammogram are followed up with a repeat mammogram, ultrasound testing, and/or a tissue sample (biopsy) to inspect the cells and determine treatment, if necessary.

Mammography is not perfect. X-rays of breast tissue may not show all cancers, or they may falsely show an abnormality that is not present. It is also important to have regular clinical breast exams. A breast self-exam does not take the place of regular mammograms and clinical exams by a health care practitioner. Radiation exposure from a mammogram is very low and not considered a risk.