Attention-deficit/hyperactivity disorder (ADHD) and learning disability (LD) are two of the most prevalent disorders occurring in children aged 6 to 17 years. In 2006, the National Centers for Health Statistics (NCHS) estimated that 4.5 million and 4.6 million children, respectively, have been diagnosed with ADHD or LD. Prescriptions for ADHD medications have increased dramatically in the past decade, with utilization in many states more than quadrupling, but the reason for the increase is not clear. The reason for the recent decline in the use of drugs that contain methylphenidate also is not known. The annual societal cost of illness for ADHD has been estimated to be between $36 and $52 billion (in 2005 dollars). Studies have demonstrated increases in substance abuse, risk-taking, and criminal behaviors among adolescents who have ADHD and other related disorders. 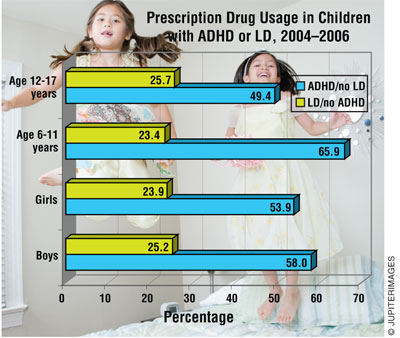 An increase in the percentage of children with ADHD occurred among both boys (2%) and girls (4%). The causes and risk factors contributing to ADHD are unknown, although the disorder appears to be more prevalent among boys.

Hispanic children (5.3%) were less likely than non-Hispanic black children (8.6%) and non-Hispanic white children (9.8%) to have ADHD. No significant racial or ethnic differences were found in the percentage of children having LD without ADHD.

Children with Medicaid coverage (5.9%) were more likely than uninsured (2.6%) and privately insured children (3.1%) to have ADHD, LD, or both disorders. These children also were more likely to utilize health care and special-education services.