Attention-deficit hyperactivity disorder (ADHD) is characterized by inattentiveness, impulsivity, and/or hyperactivity and represents a common behavioral disorder of childhood. ADHD is defined by the Diagnostic and Statistical Manual of Mental Disorders, Fourth Edition (DSM-IV) as consisting of at least six of nine symptoms of inattention or hyperactivity/impulsivity for six or more months that starts before the age of 7, with impairment in two†or more settings, and is not caused by another mental disorder. Additionally, there must be clear evidence of clinically significant impairment in social, academic, or occupational functioning.1

A recent study found that 8.7% of U.S. children aged 8 to 15, an estimated 2.4 million, met DSM-IV criteria for ADHD.2 Previous studies have found persistence of ADHD into adolescence to be 60% to 80%.3,4 Without effective treatment, the short- and long-term consequences of ADHD include poor performance at school and later at work, poor self-esteem, relationship problems, and substance abuse.3

Stimulants
Stimulant medications are first line in the pharmacologic treatment of ADHD and are effective in 70% to 80% of children.8,9 They have been used for many years; however, in the past they were only available as immediate-release oral formulations, which required multiple daily doses. This did not allow for a steady serum drug concentration throughout the day and was inconvenient. New formulations allowing for once-daily dosing were developed; however, the initial extended-release products (i.e., Ritalin SR, Metadate ER, and Methylin ER) lasted for only six to eight hours. They would cover the school day, but some children would still require a midday dose to cover the late afternoon and early evening.

Since 2000, additional products have been developed to provide a longer duration of action. The longer-acting preparations and delivery systems allow for once-daily dosing and eliminate the need for medication at school. These advances include an osmotically controlled-release drug-delivery system; beaded delivery systems that allow for biphasic drug release; a longer-acting molecule (atomoxetine); transdermal patch (methylphenidate transdermal system); and a conjugated d -amphetamine molecule (lisdexamfetamine). The two most recently approved stimulants for ADHD are the methylphenidate transdermal system and lisdexamfetamine. A comparison of currently available intermediate and long-acting stimulant medications is summarized in TABLE 1. 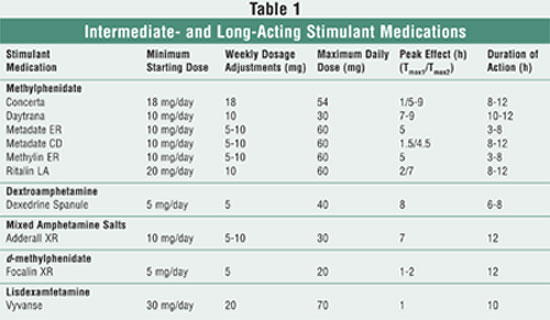 Methylphenidate Transdermal System
The mechanism of action for methylphenidate is believed to be the inhibition of dopamine and norepinephrine reuptake in the presynaptic neuron.10 Daytrana is a transdermal system that contains methylphenidate in a multipolymeric adhesive matrix. This delivery system allows for identical composition per unit area of all dosage strengths. After the patch is applied, it takes an average of 3.1 hours (range 1-6 h) before methylphenidate is detected in the plasma. When applied to inflamed skin or if heat is applied to the patch, the rate and extent of absorption are increased. Plasma concentrations peak after about seven to nine hours. The mean elimination half-life of d- methylphenidate (the more active enantiomer) after removal of the transdermal system is approximately three to four hours.11

Daytrana is approved for children 6 to 12 years of age, and four dosage strengths, listed in TABLE 2 , are available.11 Unlike oral extended-release products that have an immediate-release phase followed by an extended-release phase, the dose for the methylphenidate transdermal system is consistent throughout the dosing period. When transitioning from oral methylphenidate to the transdermal system, the lowest dosage strength should be used (10 mg q 9 h) and then titrated upward. Since the transdermal system avoids first-pass metabolism, there is a difference in bioavailability compared to the oral products. The transdermal system should be worn on the hip, alternating hips and application sites. If possible, care should be given to avoid the waistline since clothes can cause the patch to rub off. The patch should be used immediately after removal from the pouch and should be held in place for 30 seconds.11

In a long-term, open-label study treating patients with the methylphenidate transdermal system for 12 hours, the most frequent adverse events were anorexia (46%), insomnia (30%), viral infection (28%), and headache (28%). Twenty-four percent of subjects were withdrawn from the study because of treatment-related adverse events. These included application-site reaction (6%), anorexia (4%), and insomnia (4%).11

Like other methylphenidate products, the transdermal system should not be used in patients with marked anxiety, tension and agitation, glaucoma, motor tics, or a family history or diagnosis of Tourette's syndrome. Additionally, it should be avoided in patients receiving monoamine oxidase (MAO) inhibitors or in anyone with a hypersensitivity to methylphenidate or components of the transdermal system. 11

Sudden death has been reported in patients with structural cardiac abnormalities or other heart problems receiving CNS stimulant treatment at usual doses. Therefore, stimulant medications should generally not be used in these patients. Since stimulant medications can cause an increase in blood pressure and heart rate, caution should be used in treating patients whose underlying condition may be compromised by increases in those variables. In patients with a pre-existing psychotic disorder, administration of stimulants may worsen symptoms of behavior disturbance and thought disorder. Treatment has been reported to infrequently cause an emergence of new psychotic or manic symptoms. Additionally, caution should be taken in using stimulants in patients with bipolar disorder. Weight and height should be monitored periodically since stimulants can cause long-term suppression of growth. Stimulants may also lower the seizure threshold. 11

The methylphenidate transdermal system offers several advantages over oral methylphenidate. The most obvious advantage is for patients who have trouble swallowing pills or capsules. Since this new method of administration does not undergo first-pass metabolism, parents will no longer need to worry about the effect of food on the rate and the extent of absorption of the medication.11 Additionally, the transdermal system will eliminate any fear of children accidentally chewing up the extended-release beads.

Unlike previous oral methylphenidate formulations that included only dosage titration, the methylphenidate transdermal system offers both a dosage titration by increasing the patch size (increase in mg/h) in addition to duration of patch wear. If patients experience adverse effects before the end of the nine-hour wear period, the patch can be discontinued early. A further advantage includes the possible application of the transdermal system before a child awakens to allow for early-morning coverage.13

In a recent study, Arnold et al discussed not only wearing the patch for fewer than nine hours, but also wearing it for up to 16 hours if additional coverage is needed.13 Although this may be a potential future option, caution should be used in wearing it beyond the nine-hour time period. The original manufacture studies for the transdermal system were for a total wear time of 12 hours; however, due to an increase in adverse effects (anorexia, insomnia, and weight loss) the recommended wear time was reduced to nine hours.12

It has been hypothesized that the patch will deter adolescents from trying to abuse it. Once the patch has been worn and then taken off, it is difficult to reapply. Additionally, the only way to extract the methylphenidate from the transdermal system is by a chemical process.12

Vyvanse is approved for the treatment of ADHD in patients 6 to 12 years. The starting dose is 30 mg/day given in the morning for all patients, regardless of previous stimulant medication regimen. The recommended dosage increase is 20 mg/day at weekly intervals, with a maximum daily dose of 70 mg/day. Lisdexamfetamine may be taken without regard to food and should not be taken in the afternoon due to the possibility of insomnia. The capsule may be taken whole or dissolved in a glass of water and taken immediately.14

A multicenter, randomized, double-blind, forced-dose, parallel-group study was conducted in 290 patients. Patients received either lisdexamfetamine 30, 50, or 70 mg or placebo for four weeks. The primary efficacy outcome was the change from baseline in the ADHD-RS-IV score. Secondary efficacy outcomes included additional scales that assessed improvement in ADHD. The study found that each of the doses studied produced statistically significant improvements in all of the outcomes when compared to placebo.15 A second study also found significantly improved scores on multiple scales (including a scale to measure classroom manifestations of ADHD, a math scale, and a global improvement scale).16

The warnings and precautions are the same as those for the methylphenidate transdermal system and are listed above.

Several drug interactions exist with lisdexamfetamine. Amphetamines may enhance the activity of tricyclic antidepressants (TCAs), and desipramine, protriptyline, and possibly other TCAs can cause increased d-amphetamine in the brain, leading to cardiovascular effects. MAO inhibitors slow amphetamine metabolism, which can cause headaches, other signs of hypertensive crisis, or malignant hyperpyrexia. Amphetamines may antagonize the hypotensive effects of antihypertensives and inhibit adrenergic blockers. Haloperidol and lithium carbonate inhibit the central stimulant effects of amphetamines. Amphetamines may delay intestinal absorption of phenobarbital and phenytoin.14

One advantage of lisdexamfetamine is that the L-lysine has to be cleaved off once it reaches the gastrointestinal tract, so the risk for abuse is thought to be much lower than that of immediate-release formulations and formulations that have a quicker onset. A study was conducted in patients with a history of drug abuse to try to determine the abuse potential of lisdexamfetamine. The subjects received lisdexamfetamine 100 mg or IR d-amphetamine 40 mg, and subjective effects were measured on a scale of "Drug Liking Effects," "Amphetamine Effects," and "Stimulant Effects." These effects were seen in significantly fewer patients receiving lisdexamfetamine than with IR d -amphetamine. However, lisdexamfetamine 150 mg produced increases in positive subjective responses that were similar to that of d-amphetamine 40 mg and diethylpropion 200 mg. Based on these results, the abuse potential may increase as dosage increases.14

Conclusion
The development of new stimulant formulations continue to help patients with ADHD find a treatment regimen that works for them. The methylphenidate transdermal patch has changed the management of ADHD by allowing both a titration in dose and a variation in the duration of action. This new route of administration also offers many additional advantages. Lisdexamfetamine is the first stimulant prodrug to be developed and will hopefully have limited abuse potential.