Type 2 diabetes mellitus is a chronic and progressive syndrome characterized by several metabolic factors that eventually lead to hyperglycemia. The development and progression to type 2 diabetes significantly increases morbidity and mortality, most often due to chronic complications.1 In the United States, type 2 diabetes has reached epidemic proportions. In 2005, approximately 21 million adult Americans had diabetes, and it was estimated that an additional 1.5 million new cases would be diagnosed that same year.2 The prevalence of diabetes is only expected to rise. The financial impact of this disease state is staggering, with an estimated $132 billion directed toward the total cost of care in 2002.3 This article highlights major risk factors that are commonly associated with type 2 diabetes.

The development of diabetes tends to be insidious. The presence of risk factors may precede the actual onset of the disease by several years. Many times, patients may have diabetes for several years before symptoms are apparent or a diagnosis is made. In some cases, patients have identifiable risk factors for the disease that are not addressed in a medical setting, or risk factors are addressed but not aggressively enough. Decreasing the risk of progression to diabetes may greatly lower the development of complications such as cardiovascular disease, retinopathy, nephropathy, and neuropathy. Pharmacists have the ability and obligation to educate patients and be further involved in their care when appropriate. Identifying risk factors to aid primary prevention is an important intervention needed to decrease the associated morbidity and mortality.

Prediabetes
Prediabetes refers to blood glucose impairment that is not yet classified as type 2 diabetes. Without intervention, the risk of progression to overt diabetes is high. The American Diabetes Association (ADA) defines prediabetes as either an impaired fasting plasma glucose of 100 to 125 mg/dL or an impaired glucose tolerance as determined by a two-hour post–glucose load plasma glucose of 140 to 199 mg/dL after taking 75 g of anhydrous glucose dissolved in water.1

Pathogenesis
The underlying pathway for development of type 2 diabetes is unclear; however, experts postulate abdominal obesity and insulin resistance is a main contributor.4 Metabolic syndrome is commonly associated with insulin resistance and abdominal obesity and is a common risk factor for diabetes and cardiovascular disease. There are several definitions for diagnosis of the metabolic syndrome. The Adult Treatment Panel III (ATP III)definition is commonly used in clinical practice due to clinical simplicity.4 It has been modified slightly and supported by the American Heart Association and the National Heart, Lung, and Blood Institute. According to these criteria, metabolic syndrome is diagnosed in individuals who meet at least three of the criteria identified in Table 1.4 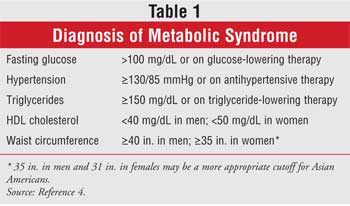 Risk Factors
While there are several modifiable risk factors associated with diabetes, it is important to identify those that are nonmodifiable. The development of diabetes is often linked within families. People who have a first- or second-degree relative with diabetes have an increased genetic predisposition for the disease. Increased age is also associated with diabetes development. The highest incidence of diabetes occurs in those ages 65 to 74.6 Although type 2 diabetes was once traditionally associated with advanced age, due to changes in American culture (including increased sedentary lifestyles and high-calorie, high-fat diets), the incidence has risen in adolescents and younger adults. Persons of certain ethnic origins have a disproportionately increased risk of developing type 2 diabetes. Those considered at highest risk include Americans of African, Asian, Latino/Hispanic, and Native American or Pacific Islander descent1.

Interventions
Data support that even a moderate decrease in weight of 5% to 10% helps to improve underlying insulin resistance. 4,7-9 Risk of progression to type 2 diabetes has been observed to decrease with decreasing weight; increasing physical activity; eating a diet that is low in saturated and trans fat, low in cholesterol, and high in fiber; minimizing alcohol consumption; and quitting smoking. Patients at risk for diabetes should be encouraged to engage in at least 30 minutes of moderately intense physical activity most days of the week.1,4

There are several studies that support lifestyle intervention as an effective method in decreasing the risk of diabetes. The Diabetes Prevention Program (DPP) Trial randomized 3,234 patients with prediabetes to receive pharmacologic or nonpharmacologic intervention to determine if the progression to overt diabetes could be halted in those with impaired glucose tolerance. Of the three groups included in the study, one received metformin 850 mg twice daily with a standard regimen of diet and exercise. Another made intensive lifestyle changes aimed at decreasing weight by 7% utilizing a low-calorie, low-fat diet and maintaining moderate physical activity at 150 minutes per week. The third group received placebo tablets twice daily as well as a standard regimen of diet and exercise. 7 After an average follow-up time of 2.8 years, there was a 58% and 31% reduction in the progression to diabetes, compared to placebo in the intensive lifestyle modification group and metformin groups, respectively.7 The results of this study support the rationale that intensive lifestyle changes are effective in decreasing the progression to diabetes in high-risk patients.

Additional data from other trials, such as the Finnish Diabetes Prevention Program, support that a relatively small decrease in weight (in this case 5%) through lifestyle intervention still has a significant impact in decreasing the risk of progression to diabetes.8 For patients in whom diet and exercise are not enough to decrease weight, other weight loss options may be available. The XENical in the Prevention of Diabetes in Obese Subjects (XENDOS) study randomized 3,305 obese individuals to receive placebo or orlisat in addition to a low-calorie, limited-fat diet and encouragement to participate in regular physical activity. At enrollment, approximately 40% of individuals had impaired glucose tolerance. At the end of the four-year study period, there was a 37.2% decrease in the incidence of diabetes in patients with preexisting glucose intolerance who received active drug and lifestyle modifications versus placebo and lifestyle modifications. 9 For some patients with severe obesity or who have obesity-related complications, bariatric surgery may also be an option.10

Persons with a past history of impaired fasting glucose or impaired glucose tolerance are also at high risk of progression to diabetes later in life. Although it may take several years, the predictive risk is high unless interventions are made. Included in this risk category are women with a history of gestational diabetes, which occurs in up to 14% of pregnancies.11 Even if normoglycemia returns postpartum, these woman have an increased lifetime risk of future development of diabetes. 11 Women at highest risk are those who have a family history of diabetes; are overweight or obese at the beginning of pregnancy; have previously had impaired glucose tolerance; have had a baby weighing more than 9 lb.; or had previous glycosuria.1 Women meeting these criteria should be screened at their first prenatal visit.1 Women with a history of polycsytic ovary syndrome (PCOS) also have an increased risk of impaired glucose tolerance and diabetes.12 Among other factors, PCOS is often associated with overweight, obesity, and insulin resistance; and although difficult, a decrease in weight will improve glycemic control. Metformin and thiazolidenediones are also used in this patient population to improve blood sugar and insulin sensitivity.12 Women with a lower risk or those who test negative should be evaluated again in the 24th to 28th week of pregnancy.1

Once an individual is considered at high risk for the future development of diabetes, aggressive interventions are needed to decrease the risk of progression. In addition to lifestyle intervention, which have a primary role, there are also pharmacological options available. As mentioned previously, metformin, as used in the DPP study, is proven to be efficacious in individuals with prediabetes. The STOP-NIDDM study demonstrated acarbose to be effective in individuals with impaired glucose tolerance.13 This is a reasonable option in patients who have postprandial elevations in glucose. Patients prescribed these agents should be monitored to ensure safety and efficacy.

Metformin may be started at 500 or 850 mg once daily and titrated to a maximum effective dosage of 2,550 mg daily in divided doses.14 Gastrointestinal side effects are the most common dose-limiting factor and may be improved with the extended-release formulation. 14 While the development of lactic acidosis is rare, it can be life-threatening. Because of this increased risk, metformin should be used with caution in patients with severe hepatic disease, alcoholism, previous history of lactic acidosis, or conditions predisposing them to lactic acidosis. 14,15 An increased risk of lactic acidosis is particularly concerning in patients with a history of renal disease who are receiving metformin. These patients should be monitored carefully while on metformin therapy. Metformin is contraindicated in males and females with serum creatinine levels of greater than 1.5 mg/dL and greater than 1.4 mg/dL, respectively.15 Renal function should be monitored prior to initiation and at least annually thereafter.15

Acarbose is often started at 25 mg right before meals and may be slowly titrated to 100 mg three times daily.14 Dose-limiting side effects are often gastrointestinal and are a main reason for discontinuation of the agent. Higher doses may increase serum transaminases; these should be checked every three months for the first year, then periodically. The dose should be decreased or discontinued if there is an increase in transaminases. Caution should be used in patients with renal disease. Acarbose should not be used in patients with severe liver disease, those with inflammatory bowel disease, or patients with other chronic intestinal conditions.16

The Role of the Pharmacist
Pharmacists are encouraged to inform patients that although drug therapy is a viable option in prediabetic patients, it should always be used as an adjunct to lifestyle intervention. Pharmacists' awareness that improvement in diabetes-associated risk factors is a multifactorial approach is vital. Most of the afore-mentioned interventions help to decrease the risk of other conditions such as cardiovascular disease and hypertension. Patient education is an important intervention. For some patients, an understanding of the disease state and risk of complications is enough incentive to be better invested in their own care. Patients should have a clear understanding of the risk factors that predispose them to diabetes and ithe ntervention strategies available for prevention and treatment. In order to implement and sustain lifestyle interventions, patients may need specialized care within a multidisciplinary team approach.