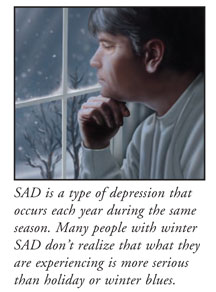 Seasonal affective disorder, or SAD, is a type of depression that occurs each year around the same time, usually during the fall and winter months. SAD can occur during the summer also, but this is less common. The important difference between SAD and other forms of depression, such as major depression and bipolar depression, is that the depressive symptoms occur during only one season and are absent the rest of the year.

Unlike the “winter blahs” or the “holiday blues,” SAD is a serious form of depression that is not related to overspending, pressure to enjoy the holidays, eating and sleeping more, or exercising less. Scentists believe that this type of depression has a biochemical basis, similar to year-round types of depression, but is influenced by changes in circadian rhythm. The development of depression during the winter season is probably due to a change in the amount of sunlight during this time. Shorter and less intense periods of sunlight on fall and winter days have an effect on serotonin (a brain chemical that regulates mood) and melatonin (a hormone that controls sleep).

Many people recognize that depressive symptoms are a problem for them around the same time each year. A doctor makes a diagnosis of SAD by reviewing a patient’s history of symptoms and by using a questionnaire that can reveal whether the patient is suffering from SAD, another type of depression, or another health problem.

Many patients with SAD benefit from light therapy, which consists of a special light-emitting box that simulates outdoor light for a specific time period at a predetermined intensity. Some patients find that antidepressant medications, taken four to six weeks before SAD typically begins, can prevent their depressive symptoms. Still others benefit from psychotherapy, a behavioral approach that helps the patient learn ways to cope with mood changes during the season when the depressive symptoms occur. One or more of these treatments can be used to prevent or treat SAD effectively.

More Than Just the "Winter Blues"

SAD is estimated to occur in 4% to 6% of the population, with up to 500,000 people significantly affected and many more with mild cases. Symptoms may begin in a person’s early twenties, and the disorder is less likely to be found in older people. SAD is more commonly diagnosed in women, and is more common in geographical areas that are farther from the equator.

The symptoms of SAD in the fall and winter are basically the same as those for other types of depression, including feelings of hopelessness, loss of interest in previously enjoyed activities, difficulty concentrating, and anxiety. These symptoms are often accompanied by oversleeping, low energy levels, increased appetite, and weight gain. People whose SAD occurs in the summer may be anxious, agitated, impatient, and irritable. This can lead to poor sleep habits, poor appetite, and weight loss. Some people with SAD treat their symptoms with drugs or alcohol, a risky behavior that only makes the depression worse. Anyone who suffers the symptoms of SAD each year should seek help from a doctor who is qualified to diagnose and treat depression. The diagnosis of SAD is made by determining that the symptoms have occurred for at least two years during the same season, that the symptoms disappear when the season is over, and that there is no other mental or physical health problem that could be the cause.

Treatment for SAD can include light therapy, drug therapy, or behavioral psychotherapy, alone or in combination. Light therapy is used as a substitute for sunlight in winter SAD. In this therapy, the patient sits near a specially designed white fluorescent light box or wears a light visor that can be set to a certain brightness over a short period of time (usually 15 to 90 minutes) each day. The therapy works by simulating outdoor light, resulting in an improvement in mood, probably through changes in brain chemistry. Results are usually seen in a few days to several weeks. Light therapy works best if the light is administered early in the day. If used properly, light therapy has few side effects. Tanning beds or similar types of lighting should not be used to treat SAD since they do not have proper UV light filtration and are not designed to provide therapeutic light simulation.

Antidepressant drug therapy also is successful for relieving the symptoms of SAD, and even for preventing them, if taken several weeks prior to the usual onset of symptoms and continued throughout the season. Bupropion is approved by the FDA for preventative therapy for SAD, and several other similar antidepressants are commonly prescribed for this condition, including fluoxetine, paroxetine, and sertraline. Antidepressants can potentially cause side effects, including drowsiness, nausea, anxiety, insomnia, and increased suicidal thoughts. These side effects must be taken into account whenever these drugs are considered for the treatment of SAD.

Psychotherapy can be useful for patients by helping them learn healthy ways to cope with the mood changes associated with SAD. Although psychotherapy cannot change the biochemistry in the brain, it can be an important tool for keeping life more regular during the season in which the depression occurs. Stress management, regular exercise and social activities, vacations to warmer and sunnier climates in winter, and avoidance of self-medication with drugs or alcohol all can be important tools to keep SAD under control during the problem season.

Although many people consider SAD to be merely the “winter blues,” this type of depression can be serious if accompanied by self-medication with alcohol or drugs, thoughts of suicide, or withdrawal from others. These symptoms are a signal that the condition is more than just the blues—it is a serious form of depression that can be successfully treated.