Pharmacists field questions about such self-care topics as motion sickness on a daily basis. While motion sickness is usually a relatively trivial complaint, it can interfere with the sufferer's work and hamper the enjoyment normally found in hobbies, vacations, and travel.

Prevalence of Motion Sickness
Virtually all persons with fully intact physiological systems for detection of motion can be made motion sick, given the correct type of stimulus.1 The prevalence of motion sickness varies with the type of stimulus and the specific group of patients, but is almost 60% in children traveling in cars or planes, and as high as 100% of those in boats in rough weather.2 The prevalence is lower in seasoned travelers.

Etiology of Motion Sickness
Humans detect motion through three sources of input to the nervous system.3 One is the vestibular system. Movement is detected in this system by stimulation of hair cells in the semicircular canals and in the maculae of the utricle and sacculus. Movement is registered in all three dimensions when endolymph moves through the semicircular canals or when small particles known as otoliths impact on hair cells.3,4 Through these mechanisms, the vestibular system facilitates spatial orientation, maintains balance, and helps stabilize vision.1

Another source of motion detection is visual. When the body moves, the eyes usually detect that motion. They measure the type of motion and its direction, rate, and force. When the motion ceases, the patient uses visual input to confirm that the body is still. 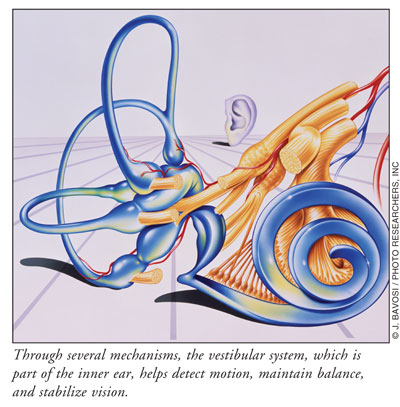 The final source of motion perception is the proprioceptive system.3 This system consists of the muscles, ligaments, and tendons that the body uses to detect motion. They are critical in such activities as allowing the person to stand erect with the eyes closed. In this position, the person is able to remain erect by sensing and responding to the various movements of the legs.

Normally, the three sources of detecting motion are in agreement with one another. For instance, the driver of a car registers input from the proprioceptive system as he feels the motion on the legs, arms, and posterior when the car endures the uneven roughness and curves of the road. In a similar manner, the vestibular system also registers movement of the car, whether it is in forward or reverse, when it is turning, and even when it rocks from side to side. The visual system comes into play since the driver must constantly look outward to drive safely and anticipate road hazards. Thus, for the driver, the three sources of motion detection are in full agreement. There is no question that the car is moving, and there is little risk of motion sickness.

Motion sickness may occur when one of the sources of motion detection does not agree with the other two. In the majority of cases, visual input does not coincide with vestibular/proprioceptive input. The theory that encompasses and explains these concepts are known as the "neural mismatch" or "sensory conflict" theory. 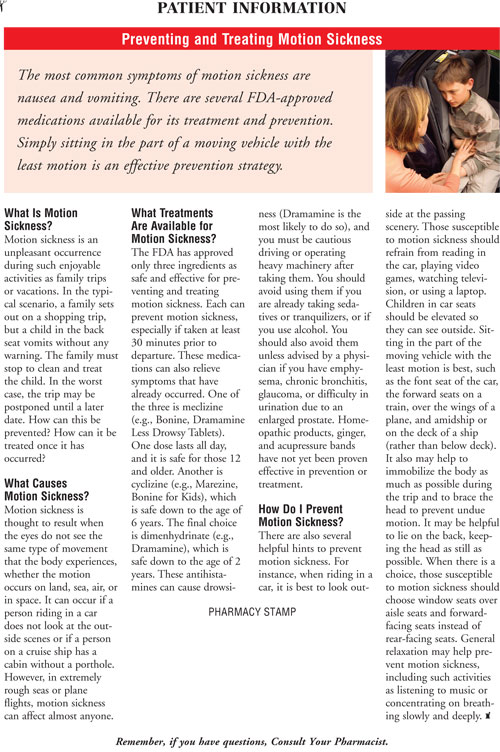 Two Types of Motion Sickness
There are two types of motion sickness. The first and most common occurs when the eyes do not register motion but the vestibular/proprioceptive systems do. This type can occur on land (caused by automobiles, trains, and theme park rides); on the sea as seasickness or "mal de mer" (caused by boats, standard or hydrofoil ferries, and survival rafts); in the air as airsickness (caused by gliders, hovercraft, helicopters, and planes of all descriptions); and in space as spacesickness (e.g., riding the Space Shuttle).1,3 For example, the head of a small child in the backseat of a car is often below the level of the windows, rendering him unable to see out to observe the rapidly passing landscape. Passengers may also be absorbed in reading or playing computer games. In these cases, the eyes do not register the various movements of the car, leaving the patient bereft of the input needed to prevent a sensory conflict.

The second type of motion sickness is sometimes referred to as "reverse motion sickness," as it is the opposite of the traditional type. In this case, the eyes register motion, but the vestibular/proprioceptive systems do not agree with the visual input. The sources of confusing "optokinetic" visual input include using microfiche/microfilm machines; attending wide-screen movie theaters (e.g., the 1950/1960s triple-screen "Cinerama" movies, the more modern IMAX theaters); watching movies with jerky and unpredictable camera movements (e.g., "The Blair Witch Project"); playing video games (e.g., PlayStation, Xbox); trying to read a moving map navigation system while driving; and using driving simulators, fixed-base flight simulators, and head-mounted and fixed-base virtual reality equipment.1,4,5 In all of these cases, body motion does not exist as the eyes see it. People may attempt to compensate for the illusion of movement by unconsciously moving their bodies in a postural swaying motion in the direction of the implied movement.1,5

Epidemiology of Motion Sickness
The hypothesized etiology of motion sickness explains why patients with a bilateral loss of the vestibular system are seemingly immune to the condition in normal circumstances.1 On the other hand, patients with vertigo, Meniere's disease, or migraine are more prone to motion sickness. Gender and age also predict motion sickness. Females are more susceptible, in a 5:3 male to female ratio; females also experience higher rates of nausea and vomiting.1,6

Age and motion sickness are associated in a bimodal fashion. For instance, infants and extremely young children do not experience symptoms of motion sickness. The age of onset for the condition is usually ages 6 to 7, and the greatest incidence is in those 9 to 10 years of age. Following that peak, susceptibility decreases, probably due to the phenomenon of habituation or adaptation.1,2,6

Studies demonstrate that the person in control of a vehicle is less prone to become motion sick. Thus, the driver or pilot is protected, while the passengers are at higher risk.1 The reason is simple. The pilot of a watercraft is able to see and anticipate rougher water and the subsequent movements of the ship. On the other hand, the passenger is jerked and thrown about seemingly at random. Young children in car seats that restrict them to a location where they cannot observe the outside scenery are particularly vulnerable. 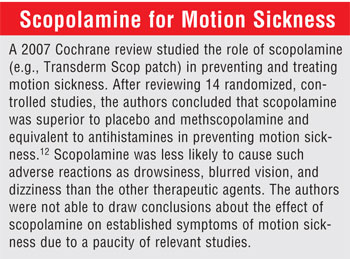 Manifestations of Motion Sickness
The most well-known outcome of motion sickness is vomiting, preceded by nausea.2 However, sufferers also experience such manifestations as malaise, pallor, yawning, restlessness, warmth, drowsiness, belching, sialorrhea, headache, and sweating.2 Patients may feel relief after a single bout of vomiting, but in a few cases, the vomiting can be protracted and severe.

Adaptation to Motion
The epidemiology of motion sickness in automobiles clearly demonstrates that older children do not experience it as much as younger children. Further, those taking a second or third cruise experience it less than first-time travelers. Patients who have been exposed to a provocative motion are thought to adapt to that motion, lessening the risk of motion sickness upon future exposures to the same type of motion.1 The duration of the adaptation is individual. Patients who wait to take a second cruise until many years after the initial venture may experience motion sickness again

All antihistamines carry contraindications against use with emphysema, chronic bronchitis, glaucoma, or difficulty in urinating due to enlargement of the prostate gland, unless a physician is consulted. Meclizine and cyclizine cause drowsiness, and dimenhydrinate causes marked drowsiness.2 For this reason, they must also be used with caution in patients who drive or operate heavy machinery. They should also be avoided in those taking sedatives or tranquilizers and those who use alcohol.

Various products sold for motion sickness and nausea lack the FDA-approved efficacy that would be needed for a confident recommendation. They include ginger, acupressure bands, and such unproven homeopathic remedies as silver nitrate, borax, nux vomica, poison ivy, petroleum, and tobacco.7,

Prevention of Motion Sickness
Patients flying in fixed-wing aircraft should choose seats over the wings, as the plane's center of gravity is less susceptible to motion, minimizing in-flight vibratory oscillation.9 Passengers in automobiles should strive not to read, watch television, work with laptop computers, or play computer games. Rather, they should look outside of the car

Mal de Debarquement
The pharmacist may also be asked about a condition related to motion sickness known as "mal de debarquement."1,10,11 These patients have usually been on a flight or cruise without incident, but upon disembarking, they feel unsteady, and the floor seems to tilt or rock. The trip may have been no longer than a 3-hour dinner cruise. In the more severe cases, the patient may experience full-blown motion sickness. Standard motion sickness medications seldom give relief, but the condition resolves in a few hours or days in most cases


Correction: In the November 2007 issue, it was reported that the monoamine oxidase inhibitor Marplan (isocarboxazid) is no longer marketed, when in fact Marplan is currently marketed in the U.S. by Validus Pharmaceuticals, Inc.