Pneumococcal infections cause an estimated 3,000 cases of meningitis, 50,000 cases of bacteremia, and 500,000 cases of pneumonia annually.1 Centers for Disease Control and Prevention (CDC) surveillance data suggest that persons younger than 2 years of age and those 65 years and older account for the highest percentage of cases. Consequently, one goal of the Healthy People 2010 initiative is to decrease the incidence of invasive pneumococcal infections to 46 per 100,000 persons younger than 5 years and 42 per 100,000 persons aged 65 and older. 2 Vaccination appears to be the most effective strategy for preventing invasive pneumococcal disease (IPD), especially since treatment is hampered by the increasing resistance to available antibiotics.

Background
For more than a century, the study of Streptococcus pneumoniae and pneumococcal infections has occupied a central position in the development of a scientific basis for the control of infectious diseases. The organism was first isolated almost simultaneously by both Sternberg and Pasteur in 1881. In the early 1960s, Austrian and Gold demonstrated that pneumococcal infections remained lethal despite appropriate antimicrobial therapy.3,4

The major clinical syndromes caused by S pneumoniae are widely recognized. Direct spread of the organism from the nasopharynx leads to otitis media, sinusitis, and pneumonia. Invasive pneumococcal disease is defined by the detection of S pneumoniae in the bloodstream; the presence of primary bacteremia; or hematogenous spread of the organism, causing meningitis and endocarditis.3,4

The Organism
Pneumococci are facultative anaerobes that grow in short chains and appear as Gram-positive diplococci. Cell-wall polysaccharide is unique to S pneumoniae and consists of a peptidoglycan backbone, which plays a major role in stimulating the inflammatory response associated with pneumococcal infections. The capsular polysaccharide is one of the primary factors responsible for the virulence of the organism. Unlike peptidoglycan, capsular polysaccharide does not induce an inflammatory response, but inhibits phagocytosis and interferes with intracellular killing of phagocytized pneumococci.3

Differences in the chemical structures of pneumococcal capsular polysaccharides provide the basis for classifying the organism, and 90 different serotypes have been identified to date.3,4 Fortunately, only a limited number of serotypes account for most pneumococcal disease in humans. The seven most common serotypes account for roughly 80% of infections in children aged 6 years and younger; this drops to 50% in older children and adults, illustrating the variances in epidemiology of individual serotypes among different age groups. 4

Pathogenesis
S pneumoniae colonizes the nasopharynx, and culturing yields pneumococci in 5% to 10% of healthy adults and 20% to 40% of healthy children. The overall rate of IPD in blood, pleural fluid, or cerebrospinal fluid (CSF) is approximately 15 per 100,000 persons annually. Transmission of S pneumoniae occurs as a result of direct person-to-person contact by respiratory droplets and autoinoculation in persons carrying the pneumococci in their upper respiratory tract.5

Suppression of the gag or cough reflex can be induced by alcohol, opiates, or aging.3 Cigarette smoking is the strongest independent risk factor for IPD among immunocompetent, nonelderly adults.6 Crowding in such varied environments as day-care centers, homeless shelters, and prisons increases the risk of exposure. Alcohol ingestion, renal or hepatic insufficiency, glucocorticoid treatment, and diabetes mellitus adversely affect the migration of and bacterial killing by polymorphonuclear leukocytes.3

The spleen is the principal organ that clears pneumococci; consequently, infection occurs overwhelmingly in children and adults whose spleen has been removed or is dysfunctional. Defective antibody formation has the greatest impact on susceptibility to pneumococcal infection. Other factors that predispose to IPD are: CSF leaks; chronic lung disease; congenital immune deficiency; congestive heart failure; immunosuppression; HIV infection; malignancy; and sickle cell disease. Children aged 24 to 35 months and those aged 36 to 59 months who are of Native American or African American descent also are susceptible to IPD. 5,7

Clinical Manifestations
Pneumococcal pneumonia is the most common clinical presentation among adults, especially those aged 65 years and older. Approximately 175,000 hospitalizations occur annually in the United States, and pneumococci account for up to 36% of adult community-acquired pneumonia (CAP) cases and 50% of hospital-acquired pneumonia cases.4

Age-related changes in pulmonary host defenses and signs and symptoms of pneumonia in the elderly appear in TABLE 1.8 Although elderly persons may show fewer signs, symptoms, and physical findings than younger adults, 60% of both age groups manifest a classic bacterial pneumonia syndrome, defined as having at least three of the following signs and symptoms: acute onset, chills, chest pain, and purulent sputum.8,9 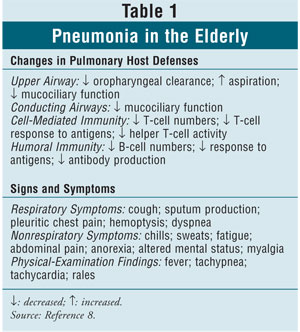 Pneumococcal meningitis, with or without accompanying bacteremia, is the next most common form of invasive disease.3 Since bacterial meningitis due to Haemophilus influenzae type B was virtually eliminated through routine vaccination, pneumococcal meningitis has become the leading cause in both adults and children, with a mortality rate ranging from 16% to 37% and neurologic complications including coma, focal neurologic deficits, and seizures in 30% to 52% of surviving adults.10,11 Most patients have predisposing factors similar to those seen in pneumonia, such as existing infection or immunocompromised state.10 Persons with cochlear implants also appear to be at increased risk.4

At least two of the following classic symptoms are seen in most patients with pneumococcal meningitis: headache, fever, stiff neck, and altered mental status. Increased severity is indicated by the presence of neurologic complications on admission.10,11 Despite treatment, most patients develop complications, including cerebrovascular sequelae, cranial nerve palsies, septic shock, cardiorespiratory failure, and disseminated intravascular coagulation. 10,11

Diagnosis
A pneumococcal infection is diagnosed when S pneumoniae is cultured from the blood or a normally sterile extrapulmonary site such as the CSF, pleural fluid, or synovial fluid. The quellung reaction is a test that provides rapid identification of pneumococci in clinical specimens such as CSF, sputum, and exudates. If the test is positive, a large capsule surrounds the organism. 4

Microscopic examination and culture of sputum samples is a potentially useful diagnostic test for pneumonia. However, 30% to 40% of patients fail to produce sputum and may have received prior antibiotic therapy.3 A promising approach has been developed that uses enzyme-linked immunosorbent assay to detect increases in antibodies to pneumococcal surface antigen A in the sputum and urine.3 Chest radiography reveals an area of infiltration involving a single lobe. 8

Considerable attention has been given to improving the accuracy of tests that diagnose pneumococcal infections by detecting pneumococcal antigen in the sputum, blood, CSF, or urine. Unfortunately, most of the newer techniques have not added substantially to the diagnostic utility of bacteriologic methods alone.3

Treatment
The basic principles of treatment for pneumococcal infection are similar to those for treating other types of infection.5 Treatment generally includes antibiotics that are effective against S pneumoniae and other potential pathogens since the causative organism is not known at the time treatment is started.

Patients with pneumococcal pneumonia are considered for outpatient versus inpatient treatment based on age, severity of illness, and comorbidities. Treatment with third-generation cephalosporins, quinolones, macrolides, penicillins (with or without beta-lactamase inhibitors), and doxycycline all seem to be equally effective. Duration of therapy is usually 10 to 14 days.8,9

Standard agents used to treat pneumococcal meningitis are penicillin, ampicillin, cefotaxime, ceftriaxone, and vancomycin. Dexamethasone is the only accepted adjunctive therapy; it has been shown to decrease mortality and neurologic complications.10,11 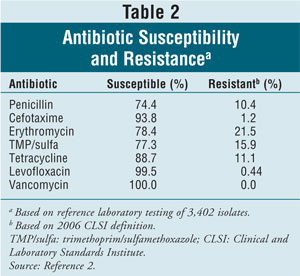 Vaccination remains the primary preventative strategy for CAP in the elderly.8 Routine immunization with the polysaccharide conjugate vaccine has reduced the risk of invasive S pneumoniae infection in young children by 90% and indirectly decreased the incidence in older adults.15,16 Despite CDC recommendations, most patients, especially elderly ones, do not obtain the appropriate vaccinations. In 2002, a study of patients' knowledge and perceptions regarding vaccinations found that patients who were not up-to-date with their pneumococcal vaccinations were unaware that they were at risk and did not recognize the need for the vaccine.17

Vaccines
Pneumococcal Polysaccharide Vaccine (PPV23): PPV23 comprises purified preparations of polysaccharide capsular antigen from 23 types of pneumococcal bacteria that cause 88% of bacteremic pneumococcal disease. The vaccine currently available in the U.S., Pneumovax 23, contains 25 mcg of each antigen per dose and 0.25% phenol as a preservative. It is available as a single-dose vial or syringe and as a five-dose vial.4,18

More than 80% of healthy adults who receive PPV23 develop antibodies against the serotypes contained in the vaccine, usually within two to three weeks after vaccination. Elevated antibody levels persist for at least five years in healthy adults, but decline more quickly in persons with underlying illnesses. Overall, the vaccine is 60% to 70% effective in preventing invasive disease, specifically bacteremia, but has not been shown to provide protection against pneumococcal pneumonia. 4,18,19

Because the target groups for the PPV23 and influenza vaccines overlap, these two vaccines can be given concurrently. In addition to adults aged 65 years and older, immunocompromised persons aged 2 or more years who are at increased risk for pneumococcal disease or its complications should be vaccinated. Those with chronic illness and those who are in a high-risk environment (e.g., institution) also should be vaccinated. If elective splenectomy or cochlear implantation is being considered, the vaccine should be given at least two weeks before, or as soon as possible after, the procedure.4,18,20

Most recipients will need only a single lifetime dose of PPV23. Following vaccination, antibody levels decline after five to 10 years, but a higher antibody level does not necessarily correlate with better protection. Routine PPV23 revaccination of immunocompetent persons is not recommended.4,18,19

For high-risk patients, only one revaccination dose is recommended. The second dose should be administered at least five years after the first dose. Revaccination three years after the first dose may be considered for children at high risk for severe pneumococcal infection who are no older than 10 years at the time of revaccination. Persons aged 65 years and older should be administered a second dose of pneumococcal vaccine if they received the first dose more than five years previously and were younger than 65 years at the time.4,19,21

Pneumococcal Conjugate Vaccine (PCV7): The first pneumococcal conjugate vaccine, Prevnar, was licensed in the U.S. in 2000. It comprises purified capsular polysaccharide of seven serotypes of S pneumoniae conjugated to a nontoxic variant of diphtheria toxin. After four doses, more than 90% of healthy infants develop antibodies to all seven serotypes. PCV7 was shown to reduce invasive disease caused by vaccine serotypes by 97%, and disease caused by all serotypes--including those not in the vaccine--by 89%.4,7 All children younger than 24 months of age and those aged 24 to 59 months with a high-risk medical condition should be routinely vaccinated with PCV7. The primary series consists of three doses given at 2, 4, and 6 months of age. The fourth booster dose is recommended at 12 to 15 months of age. Unvaccinated children aged 7 months or older require fewer doses. For children vaccinated before 12 months of age, the minimum interval between doses is four weeks. Doses given at age 12 months and older should be separated by at least eight weeks. PCV7 is not routinely recommended for children older than 59 months; revaccination with PCV7 after an age-appropriate primary series also is not currently recommended. 4,7,22,23

Adverse Reactions and Contraindications: Both vaccines are inactive and administered by intramuscular injection; therefore, the most common adverse reactions are local site reactions. Pain, swelling, and erythema have been reported and persist for less than 48 hours. The incidence is 30% to 50% for PPV23 and 10% to 20% for PCV7.4,7,18

A severe allergic reaction to a vaccine component or following a prior dose is a contraindication to administering further doses. Patients with moderate or severe acute illness should wait until their condition improves before being vaccinated. Contrary to popular belief, minor illnesses such as upper respiratory infections are not a contraindication to vaccination. The safety of PPV23 vaccine in pregnant women has not been studied, although no adverse consequences have been reported.4,7,18

Storage and Handling: Store PPV23 and PCV7 under refrigeration (35°F-46°F [2°C-8°C]). Do not freeze pneumococcal vaccines. Opened multidose vials may be used until the expiration date if they are not visibly contaminated.4,7,18

Conclusion
One of the Healthy People 2010 objectives is to achieve 90% coverage of noninstitutionalized adults aged 65 years and older for pneumococcal polysaccharide vaccine. According to data from the 2005 Behavioral Risk Factor Surveillance System surveys, the overall proportion of respondents who reported ever having received pneumococcal polysaccharide vaccine was approximately 64%.24