In 1991, Mark Beers and an expert panel developed explicit criteria for potentially inappropriate use of medications in residents of nursing homes.1 This list of potentially inappropriate medications (PIMs)--also known as the Beers List or Beers Criteria--was updated in 1997 and again in 2003.2,3 The 1997 and 2003 versions included more current medications, used updated evidence, and utilized literature that was generalizable to community-dwelling older adults. This expert-consensus guideline includes medications for which evidence of efficacy is scant; for which better alternatives are now available; and for which dose and disease limitations lead to poor risk-benefit when used by older adults. This guideline has been both widely used and criticized. In the absence of evidence, however, expert consensus remains the standard of care.

Diphenhydramine
Diphenhydramine is a first-generation antihistamine. Its two primary uses as an OTC medication are to treat allergy symptoms and to provide sedation as a sleep aid. As a treatment for allergies, it is being supplanted by newer second-generation antihistamines such as fexofenadine, loratadine, and cetirizine. (The last two are now available OTC.) The absence of anticholinergic and sedative effects makes the second-generation antihistamines attractive choices for treating allergy symptoms.6 There is consensus among expert guidelines that the anticholinergic potential of diphenhydramine outweighs the potential benefits since equally efficacious alternatives exist.3,7 The severity rating of this PIM is designated as "high."3

Because age-related changes occur in the cholinergic system, there is concern that strong anticholinergic effects may lead to a decline in cognitive function or even precipitate delirium in older adults. Diphenhydramine can have significant cognitive and performance-related adverse effects even in younger patients.12,13 One study showed no difference in 24-hour pharmacokinetics and pharmacodynamics between a younger and an older study group; this was a very small cohort, however.14 Other studies have suggested a significant elevated risk of adverse outcomes in older adults.15-17 These studies used doses of 50 mg and greater.15-17 It has not been documented that lower doses would carry the same efficacy, although side effects are dose-related. Additionally, Agostini et al included patients with dementia, which would predispose for cognitive decline and slightly bias the trial outcome.16 Because alternatives that do not have anticholinergic effects are available, even the short-term use of diphenhydramine should be discouraged.

To sum up, the use of diphenhydramine in older adults should be discouraged both as an antihistamine and as a sedative because of the potential anticholinergic risks, the lack of superiority over equally efficacious alternatives (antihistamines), and better-tolerated and more effective alternatives (sedative/hypnotics). Since the other OTC options are dietary supplements, the regulatory status of these agents, the potential for adulteration, and the absence of active ingredients should be considered. It may be prudent simply to review sleep hygiene and nonpharmacologic interventions with the patient with ongoing sleep complaints and refer the patient to his or her primary care physician. A number of guidelines and reviews exist concerning alternative sedative/hypnotics. 18-21


Both chronic and acute pain are common in older adults. Self-treatment may be appropriate for some; however, many older adults are likely to be using OTC analgesics chronically. Chronic use of NSAIDs in older adults has been associated with the development of renal dysfunction, gastrointestinal (GI) bleeding (GIB), hypertension, and exacerbation of heart failure.22-24

Age greater than 65 years is a strong risk factor for GIB. GIB in older adults has been associated with increased hospitalization and mortality.25 Scheiman reported a relative risk of 5.6 for GIB for age greater than 70 years.26 There is consistency across younger populations for a strong association between use of NSAIDs and increased risk of GIB.26-32 There is consistent suggestion that ibuprofen has a lower risk of GIB than naproxen does; in fact, ibuprofen does not appear in the Beers List.28 GIB risk with NSAID use is dose-dependent, may be highest early in the first week to month, and persists with use (duration).28,32 For ibuprofen, the cutoff dose seems to be 1,200 mg/day or 400 mg tid × 1 week. At or below this dose, the relative risk of GIB in the absence of other risk factors such as excessive alcohol consumption is low and not statistically significant; doses greater than 1,200 mg/day, however, carry a significant risk. Even with lower doses, older adults tend to have a significant risk of dyspepsia with ibuprofen.33 Careful history-taking may help detect increased use of antacids and other GI protectants indicative of this adverse effect.

The key to avoiding GIB associated with NSAIDs is to use the lowest effective NSAID dose for the shortest period of time. Other strategies may be implemented when NSAIDs are required for analgesia; for example, use of proton-pump inhibitors may decrease the risk of GIB.36 (However, since use is likely to be chronic and risk of GIB in this population would remain high, provider monitoring would be necessary in this situation.) If a patient presents with a chronic illness such as diagnosed osteoarthritis, consideration should be given to a trial of acetaminophen before NSAIDs, according to guidelines. 37,38

Ferrous Sulfate
Ferrous sulfate has one indication: to prevent or treat iron-deficiency anemia. In this context, this supplement may be used to restore body iron stores. A typical adult dose would be 325 mg tid. One small trial has suggested that in older adults a once-daily dosing strategy was as efficacious as multiple daily dosing; also, there was less potential to cause constipation.39 While this finding should be confirmed in a larger clinical trial, it has led to the Beers List recommendation that doses of ferrous sulfate greater than once daily may be potentially inappropriate.

Mineral Oil
Simply put, safer and more efficacious alternatives exist. The sole existing study of mineral oil's efficacy was very small and had poor methodology.40 The laxative mechanism of mineral oil has no advantage over other laxatives, and there is a risk of aspiration and development of lipid pneumonia. More than 20 case reports have been published highlighting this rare but serious complication that occurs primarily in pediatric and geriatric patients. Especially if an older adult has swallowing difficulties, mineral oil should be discouraged as a laxative. Any other laxative would be a better choice in an older patient.

Other PIMs
PIMs independent of diagnosis are listed in TABLE 1; those based on pre-existing diseases or conditions are given in TABLE 2.3 See Reference 3 for details concerning the rationale for the potential inappropriateness of medications not covered in this article. While the Beers List has been successfully used to prevent potential medication-related problems in older adults, several things must be kept in mind. First, these medications are considered potentially inappropriate; the criteria are not rigid. This means that there may be occasion for appropriate use; this is likely to be the exception rather than the rule in community-dwelling older adults, however. Second, one caution with an explicit list of medications is that it has to be updated regularly. Third, the list does not address medication-related problems like underuse and potential drug-drug interactions. 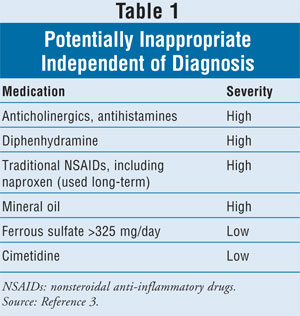 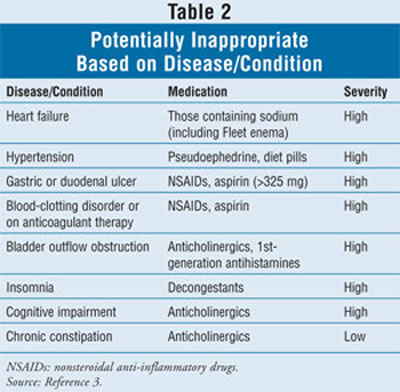 A detailed knowledge of these medications can have a potentially huge influence on the care of community-dwelling older adults and reduce the occurrence of preventable medication-related problems. Older adults represent a high proportion of OTC users. Often, older adults do not discuss these medications with their physician or pharmacist.41 So, it may be the pharmacist who initiates the discussion. The FDA has been exploring ways to create a "pharmacist-only" class of medications, which would increase the demand for pharmacists with the skills, knowledge, and experience to care for older adults.42

Conclusion
The use of OTC medications and PIMs is quite common in older adults. OTC PIMs such as diphenhydramine, NSAIDs, ferrous sulfate (>325 mg/day), and mineral oil could potentially lead to significant adverse outcomes in this population. Pharmacists are in an excellent position to prevent adverse medication-related outcomes from the use of PIMs, whether prescription or OTC. Thorough knowledge of the Beers List may be the first step in equipping community pharmacists to intervene and prevent unnecessary medication-related problems in older adults. Typically, safer and equally efficacious alternatives exist and should be given strong consideration prior to the use of these PIMs in older adults.