The characteristics of individuals 18 years of age and older in 2006 who suffered from lower-back pain (27.4%), migraines (15.1%), or neck pain (14.3%) three months prior to being surveyed were analyzed and reported in the National Health Interview Survey (2006).

Sex: In all three categories, women exceeded men in the likelihood of experiencing pain. For migraines, the ratio of female to male sufferers was 2:1. White women had the highest rate of prevalence of neck pain (18.0%), followed by Hispanic women (16.8%), white men (13.2%), and African American women (12.6%). 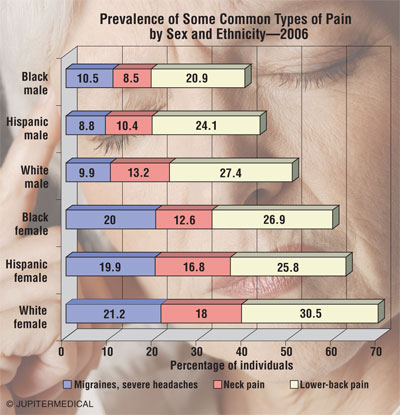 Education: Across pain categories, prevalence was lowest among individuals who attained a bachelor's degree or higher. The highest rates of prevalence in all three categories were among participants who had some amount of college education.

Poverty Level: Prevalence of lower-back pain, migraines, and neck pain was highest among poor respondents. The lowest rate of prevalence was among respondents who were not poor. Those who were categorized as "near poor" fell in between these rates.

Health Insurance: Prevalence rates of the three types of pain among participants under the age of 65 years who had private insurance or were uninsured were nearly half those of their counterparts covered by Medicaid.